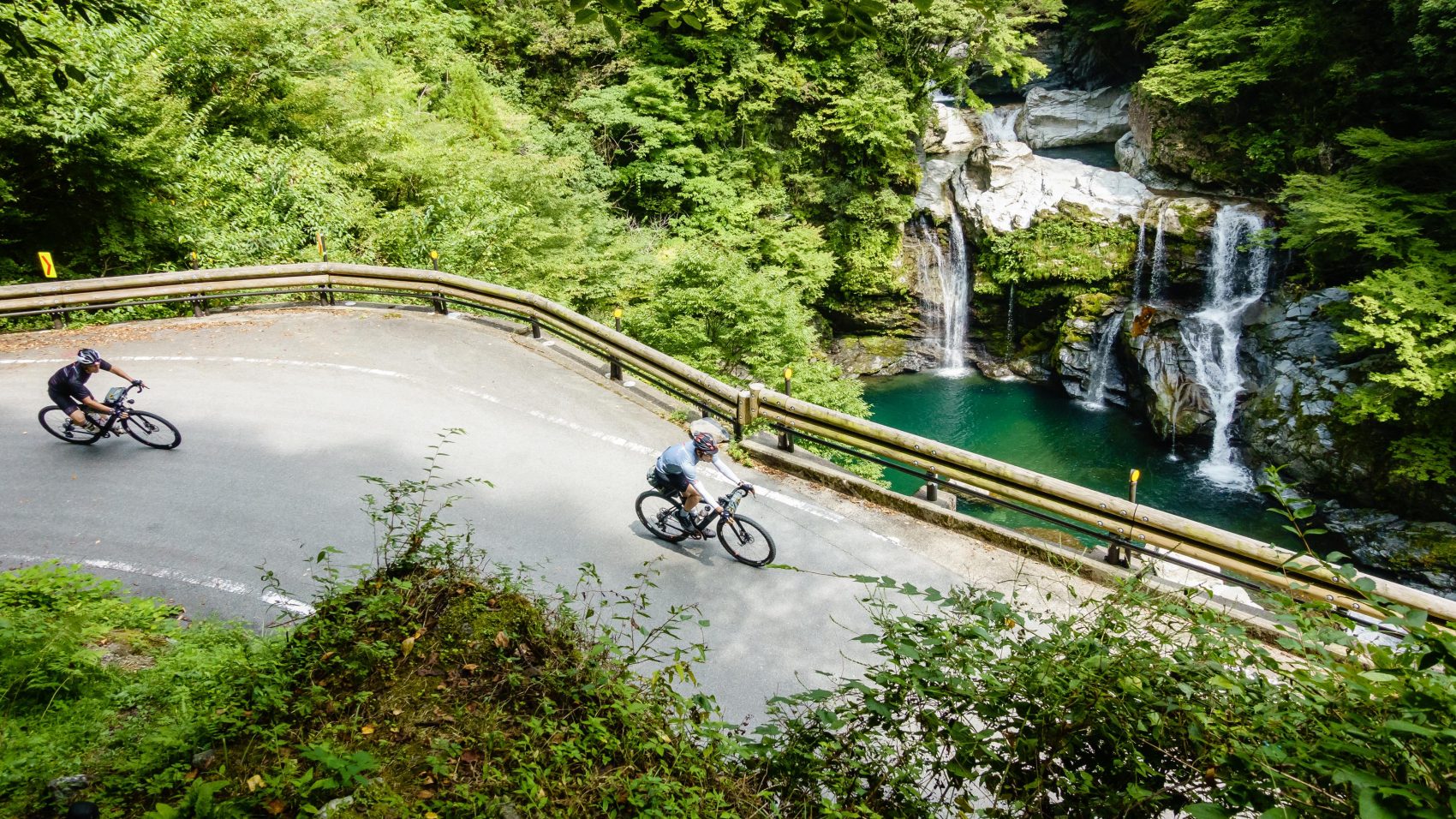 Most bike trips I have seen in Japan happen near Tokyo, where all travelers want to spend a few days wandering the huge metropolis. We decided to head south instead, to the Tokushima prefacture, looking forward to ride with our friends Hayato Higuchi and Minsu Oh from ASAHI. Our target was the longest gravel mountain road in Japan, the famous Mt Tsurugi “Super Forest Road”. Can’t be a bad choice with that name…

When we started planning our trip to Japan with our Exploro gravel bikes, all options were open. Looking for something close to Tokyo? Heading North to the Hokkaido island? Maybe Okinawa would be cool? After getting in touch with our friends at ASAHI, their crew suggested a perfect gravel route that crosses the southern island, a 2 hour drive from their headquarters in Osaka, and the perfect location for a 3 day bikepacking trip. The “Super Forest Road” located at the foot of Mount Tsurugi is a famous off-road drive for Japanese tourists, be it on dirt motorbikes or 4×4 cars. Now, we got to add gravel bikes. It’s not a technical route, it weaves through deep and rocky river gorges while combining broken pavement with perfect double track trails. It includes vistas that allow you to enjoy the Pacific Ocean in the far distance while eating your last dry octopus snack after a gruelling climb. After meeting with our friends Hayato Higuchi, Minsu Oh and our car driver for the transfer, Shinya Yamada, we left the big city of Osaka, the second largest city of Japan with its 19 million population. As we found out during our 2 days stay there, Osaka is known as the “nation’s kitchen”, with thousands and thousands of restaurants around the city, a true foodie paradise, and worth a visit if you are planning to fly here.

But we flew to the other side of the (our) world to ride bikes, so after a scenic drive crossing the Awaji island we reached the Tokushima prefecture and headed for the Tsukigatani onsen in Kamikatsu, our first stop and departure point for the 3 day trip. A beautiful small town, nested among high mountains, and  in the words of Hayato-san: “A plum and a peach, a wild cherry tree are beautiful in spring, and it is healed in summer by the lush green rice and Katsuura river of Tanada, and beautiful colored leaves enjoy it at a hearing again and again waterfall of Tonokawauchi Canyon in autumn, and it is cold a little in winter, but slow time drifts in valley hot spring in a month.” I don’t know anybody other than Japanese where every sentence is a poem.

There was a debate whether we should start setting up the bikes first or go straight to the onsen (Japanese spa) but of course, the spa always wins, and we headed to our first experience with the world of Japanese public baths. It’s a great combo of washing and relaxation in this country full of medicinal and thermal waters under its soil. Every little hotel in the countryside has its own onsen, and it is a ritual for the Japanese (and tourists) to make good use of it. We did onsen after waking up, onsen after coming back from the bike, onsen in the evening when we were getting bored and onsen before going to sleep. Full program! For those of you who haven’t been to one, it is advisable to read the Japanese strict onsen etiquette before showing up… You have been officially warned!

For the first day of the route, Rene Savelsberg joined us for the route. Rene is an old friend of ours and he was with us on one of the first XPDTN3 trips, in Iceland. He was supposed to ride with us in Reykjavik, but health problems kept him in the house for the 3 days, cooking at night and playing piano for us. So when he learned we were here while on he was on a business trip to Tokyo, he had his “revenge” by joining us for the ride.

After a mandatory short van transfer to Shikibitani, due to the changes on the route because of the rain, the ride started on flat roads (just as I like it to be able to warm up) following a huge river bed with rocks the size of a monster truck, passing through small villages with traditional japanese houses that I had to photograph from all angles. Such cool architecture! Some construction on the road allowed for a quick stop followed by a Japanese history class from our friends, and some background info about the area surrounding Mt. Tsurugi.

The gentle asphalt road suddenly turned 90º to a steep climb that slowly faded into gravel and a 4×4 vehicles-only road. Now we’re talking… With a mix of 700c and Gravelplus wheels there was a debate about which combo was best for this route. Some black clouds were seen on the horizon after yesterday’s storms, and that water could finally decided who chose the best tires. In my personal opinion, if speed is not your main focus, and comfort and being able to ride everywhere is what you are looking for, GravelPlus tires are hard to beat. Lately I’m loving the 3T Discus Plus carbon wheels combined with WTB’s new Byway tires.Get them down to 1.8 bars for gravel, or pump them up to 4 bars for road when necessary. Of course Hayato-San was on 700C with 40c Nanos, another classic combo, and we were riding together well, up and down. Versatility.

With the hotels and onsens being so well equipped, especially with the kimono (Yukata) they provide for the onsen and to sleep, we were travelling even lighter than usual. The Japanese crew decided to carry kitchen and camping utensils to do a quick picnic at the top of the mountain. I thought they would be just bringing some quick noddles and maybe tea on their Apidura packs, but they surprised me with a full pasta meal, fresh oranges and amazing coffee! #RealFood, one of the staples of XPDTN3. After a fast descent, the onsen was still waiting for us, getting ready for another amazing culinary experience afterwards. Life is good. Love my job (most of the time)

On some of our 3 day trips, we include loop routes that start and finish at the same hotel. That was the case for the second day in Tokushima, where we started the day (again) with a warm onsen bath before going to a traditional Japanese breakfast (yes, raw fish and vegetables at 7:00 AM kids…) Rene had  gone back to Tokyo for more business meetings, not knowing that he was missing the hardest climb of the route (lucky guy?) The second day had more than 2.000 meters of climbing in 70km waiting for us, but at least we were not carrying all our clothing and luggage with us on the bike.

Perfect double track among lush green mountains went by, with a spanglish-japanese conversation about gravel, bikepacking and the cycling culture in the country of the rising sun. Once you step away from the big cities and mega highways, Japan is a country full of rural roads and gravel tracks, perfect for exploration.

After a final push, using all our gears, we reached the top of Mt.Tsurugi. The Strava name of the climb segment is called “Mega Climb Gravel”, so there you go… Not that we care about Strava at all, but it was fun to see that. In the words of Hayato-San, our local roads connoisseur, “Mt. Tsurugi is the highest peak of Tokushima with a height of 1,955m above sea level, located among Miyoshi-shi, Tokushima east Sodani, Koyadaira, Mima-shi, Naka-cho and Naka-gun Kizawa. It is chosen as one of the 100 most famous mountains in Japan, and is considered to be the symbol of the prefecture in Tokushima.” We used the amazing views from the top to relax, and once again enjoy a hot noodles soup and fresh coffee that the youngster Minsu-San had been carrying during all the climb. Talk about commitment.

After a little “siesta” and a blazing fast descent, we reached the Ogama no taki Falls. As Hayato pointed out: “the Kamagatani river basin from Mt.Kumoso (1,496m) is the the source to a branch of the Naka River. The waterfall is 20 meters high and the basin is deep, and it has the legend that a big snake lives in with depth of the water 15m here.” The only snake we saw was the never ending cool road winding down the valley in a series of 180 turns that made us scream of joy like babies.

Not satisfied with the amount of climbing we already had, my Japanese friends suggested a “small climb” to get to a Buddhist Temple at the top. I’m always up with adding some culture and tourism on our XPDTN3 trips (this is not a race right?) so we started the steep climb on a solitary road, passing by micro-villages (talking about 3 houses) and fields carved into the sides of the mountains. Turned out the climb was not so “small” and added quite a few meters to our climbing stats that day. Anyway, once we got to the top, the first view of the Temple revealed that the effort had been totally worth. The Kurotaki-ji Temple was established in 793 AD and built by Kukai in the Kurotaki mountain range of the former Kisawason area. It sits at 760m above sea level and is said to be the mountain Buddhism birthplace.

For day 3, the change on the route because of the rainstorms on the first day had us going for a rather short ride today, with only 42km on the clock, to get back to the Tokushima Tsukigatani onsen. The day started (again) with a long climb, under menacing clouds that threatened us to use the rain jackets  buried deep inside our packs for the past two days

The perfect gravel climb was not so steep though, so among conversations about bikes, cameras and bikepacking we reached the final descent back to the small village of Kamikatsu. As my friends told me, and confirmed by the always handy Wikipedia, “Kamikatsu is a “zero waste” town, where all household waste is separated into 34 different categories and sent to be recycled. In 2008, a poll showed that 40% of residents were still unhappy about the aspect of the policy that required items to be washed. But the town continues the policy as it is cheaper and more environmentally friendly than purchasing an incinerator. The town has set a goal to become fully zero waste by 2020″. Japan surprises me once again.

At the arrival at Kamikatsu, our transfer driver Shinya Yamada was waiting for us at the hotel, ready to go to the onsen as well, always a good idea after a long and rather cold cycling day in the mountains. The views from the hotel let me reflect on the last 3 days spent on the bike, among lush green mountains, steep climbs and perfect gravel roads. A few months back, while looking for possible gravel routes in Japan, I already took a look at this popular route, but the maps wouldn’t let me decide if the roads were going to be suitable for bikes. I was expecting more obstacles and technical singletracks, but we found perfect double tracks and solitary secondary roads nested in the bottom of the valleys and up the hills. Definitely the perfect terrain for a cool 3 days of experiencing Japanese geography & culture and feast on fresh food. And all of this just a quick drive of fly from the big cities of Japan. Unforgettable.

And of course, lots of visits to the onsen, day and night… Arigato.