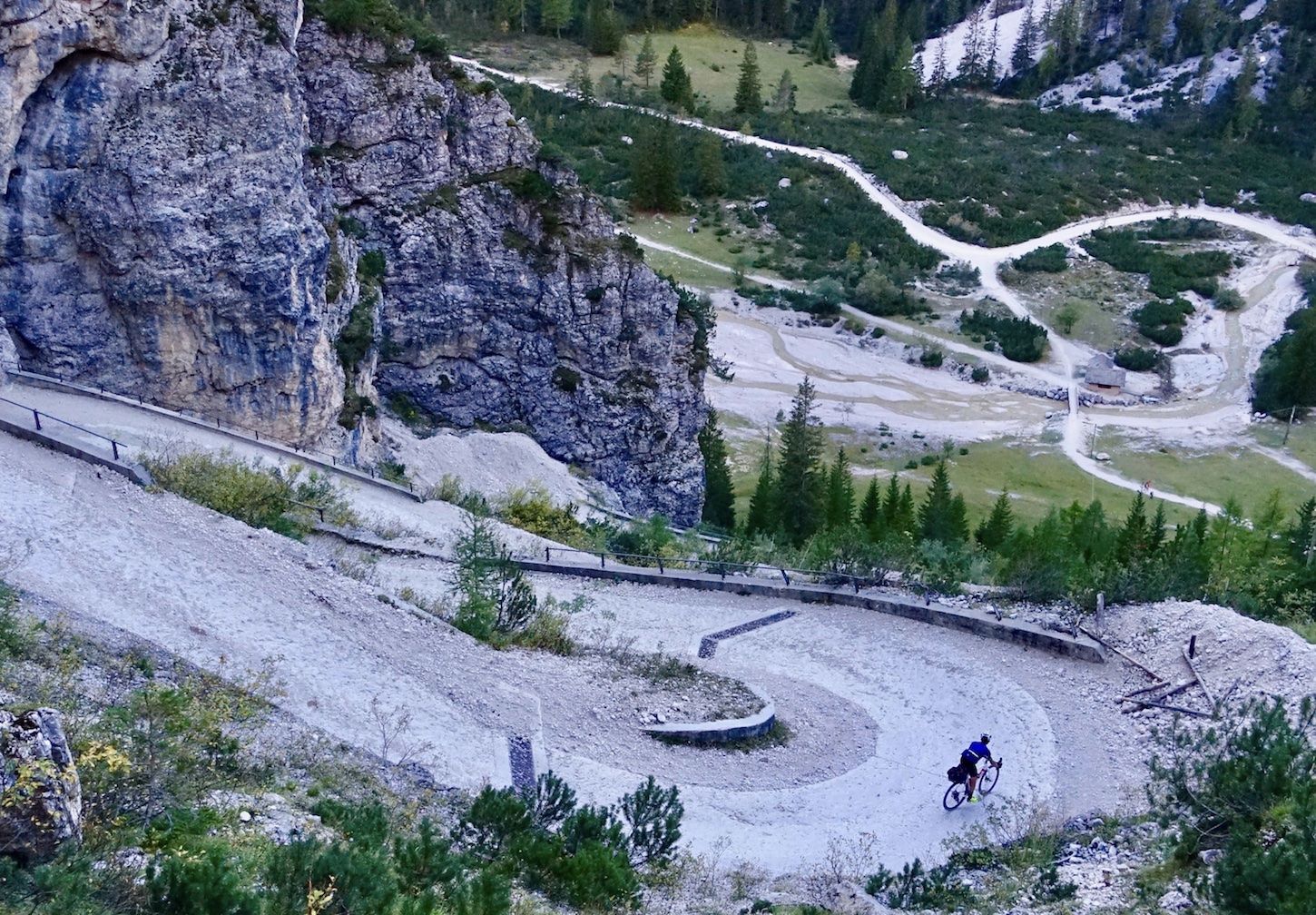 words and photography by Tim Wiggins

The outline plan is simple enough: from Badia we will ride a figure of eight loop over three days, staying in remote alpine huts for the two intermediate nights. We are traveling light, with just seat-packs; holding foul weather clothing, spares, and emergency rations… after all, the mountains can hold many surprises.

Golden light breaks through the low cloud; casting shadows on the glistening Dolomite peaks and warming the late September mountain air. We sit drinking coffee in the small family run Hotel Ustaria Posta; making final route adjustments to what promises to be some of the most challenging and awe inspiring riding I have ever undertaken on a ‘Gravel’ bike. The #XPDTN3Dolomites is about to begin…

The Valparolla is a beautiful climb – known by anyone who has ridden the Maratona de les Dolomites. The lesser known sibling of this paved pass – the old road, is a gravel path that weaves up through the forest, regularly hits double digit gradients, and occasionally requires a scramble over unattended rock slides. This is our starting climb of the tour. We emerge from the low valley cloud to panoramic views from the summit.

Back on asphalt, momentarily, we descend fast towards Cortina. Tyres buzz with 60kmp speeds, then on one hairpin my riding partner Igor calls out – “next left!” … Suddenly we transition from smooth road onto rock-strewn gravel: onto the ski slope access tracks, and then onto single-track path.Traversing the side of the mountain; gazing down on Cortina.

This is not a path often travelled. It wasn’t on our original route plan either. But, it is spectacular – high above the valley with challenging sections of boulders, rock staircases, and some forced “hike-a-bike”sections. Heart rates are raised by adrenaline, physical grunt, and the presence of the sheer cliff face on our right hand side.

The path gradually falls down to the valley, and we cross the busy main road avoided by our detour. We turn onto the more sedate gravel of the disused railway line, now bike path, which will take us to the second major climb of the day.

This ascent is a stark contrast to the Valparolla: loose, steep, and built with the intent of “access only” rather than “passageway”. There are no restful flats for tired horses on this climb; from the moment we start it, we are forced to click down to the lowest gear, and begin the “gravel grind”.

After sixty minutes of climbing we emerge from the trees. With that transition comes a gradient change too – from “manageable” to “monstrous”; this section has been concreted, presumably because even the WW1 tanks couldn’t have found traction if this slope were gravel. Hell knows how they got the concrete here… The twenty five percent gradient leaves us grappling for grip.

Summit. Rifugio. Strudel. We gaze out on the abandoned wartime airstrip created on this peak. Unsurprisingly perhaps, it never really worked… this hostile yet beautiful mountaintop was never that conducive to take-offs.

One final climb is left. First we have to skid our way down the concrete hairpins on the other side of the mountain… a mirror of the engineering masterpiece we have just climbed. I drop the bike on one corner… struggling for grip on the shiny surface; at least it isn’t as wet – I think I would have been sliding down on my backside if it were.

The sun is setting on the last climb up to the first night’s refuge; it provides some welcome warmth as we head back up above two thousand meters altitude. When we arrive it is early evening; we have time for a quick shower, before a dinner of South Tyrolean delicacies.

It is a beautifully peaceful night at the Rifugio de Fanes: no mobile signal, no traffic, and no stress. Spectacular isolation, among the high peaks.

The second day of our Dolomiti adventure starts with a sheer descent. After rolling across the high plateau we come to the cliff face… bikes shouldered; we hop and tenderly tiptoe down the staircase for thirty long minutes. Some paths are unrealistic to ride; trying to ride this would be madness.

At the bottom we reach more manageable gradients, and begin the first climb of the day. When we emerge above the trees, the hut dotted pasture provides a panoramic picture book view: snow capped peaks for miles around. We loop round the plateau’s perimeter, gazing out onto the vista. Then, shooting off down the ski-lift access road, which soon transitions into rooty single track, we plummet to the road pass below.

We finish the decent to Arabba on the asphalt of the Campolongo Pass, before beginning the ascent of Passo Pordoi amongst the motorbikes and super cars. The transition back to “reality” reinforces how peaceful and unique the Italian Giara (Gravel) roads are.

At the summit of Pordoi we take a left: the road doesn’t finish where the tarmac ends. We scramble towards the Hutte on the horizon. When we arrive, the strudel, cafe, and stunning views make the breath-taking climb well worth it.

Refueled, we turn away from the crowds of hikers; Igor has found a path that is undoubtedly “the road less traveled”, and also undeniably “Dolomite”. The rocks protrude from the single track like traffic cones, forcing you to slalom along the path that is no more than two feet wide. To our right, the cliff falls away like the side of a skyscraper, down to the Fedaia Lake below.

At the peak we look down on Pordoi from above, then barrel down towards it along another precariously rocky single-track path. Relief is one emotion when we re-join the asphalt; the mind and body can “rest” momentarily as we climb on smooth road for a few kilometers.

One more descent. One more climb, today. At the base of Sella Pass our asphalt transition abruptly ends as Igor signals onto what looks like an impossible path. Hike. Bike. Hike. Bike. Eventually, it turns to rideable gravel, and the view opens up… our Refugio sits majestically several hundred metres above us – just below the mountain peaks.

It has been another long day in the saddle; unrelenting ups and downs, to squeeze thousands of metres of elevation gain into fewer than one hundred meters of distance. We refuel with hot chocolate, then a meal of Austrian inspired cuisine, looking out from our mountain top panorama. I fall into bed exhausted.

The third day of the trip is a solo affair for me – Igor has to head home to attend family business. I start the day feasting on breakfast in the alpine hut, looking out on the peaks of Sella.

The riding begins with a traverse of the mountain’s perimeter, followed by a fast swooping descent on a mix of gravel, disused roads and forest tracks. Down. Down. Down.

I reach civilization again in the bustling town of Ortisei. Crossing over the main road, the climbing abruptly commences… Goodness knows how they built the houses on this road, let alone the road itself. Bottom gear is firmly engaged, and I am reduced to walking pace; a mental and physical struggle, as I do the calculation of how long that means this ten kilometer climb will take.

The tarmac is soon replaced by loose gravel, which slows things further – if at least adding something to concentrate on. Then, the summit presents itself; and with it a vast picture perfect backdrop. I sit for a while, recover, and take it all in.

The descent is gnarly. Rock slabs and staircases are mixed into fast and flowing gravel – demanding constant concentration. It is a relief when the path turns skywards again, and I begin the final mountain pass of the tour.

The gradient here is shallower, for the first part at least. I am able to turn the legs without engaging the 42-42 gear. Then, predictably, it ramps up; and the forest’s “pea gravel” turns to fist-sized rock gravel as the path heads above the tree line.

This final climb is a marathon in itself. At the summit I treat myself to one last strudel, and sit there at 2306 meters above sea level, surveying the view from underneath a sweat-soaked casquette.

The final descent is glorious. Flying down through the pastures in the setting sun, gravel shooting from under tyres. Even the final short climb back into the Badia valley doesn’t seem too daunting; the smell of that promised pizza is enough to keep my legs turning.

On returning to Ustaria Posta you would have struggled to wipe the broad grin from my face. Bellissimo. The Dolomites always delivers, but the last three days were exceptional; a true challenge to bike and body; matched by equal reward in the form of terrain, vistas, and truly unique rest stations.

The 3T Exploro has taken me on a journey of exploration through its motherland – an Italian dream.