CapoVelo.com
CapoVelo.com - - Cyclists in Boston Use Life-Size Cut-Outs to Send a Message to City Officials
47329
post-template-default,single,single-post,postid-47329,single-format-standard,no_animation 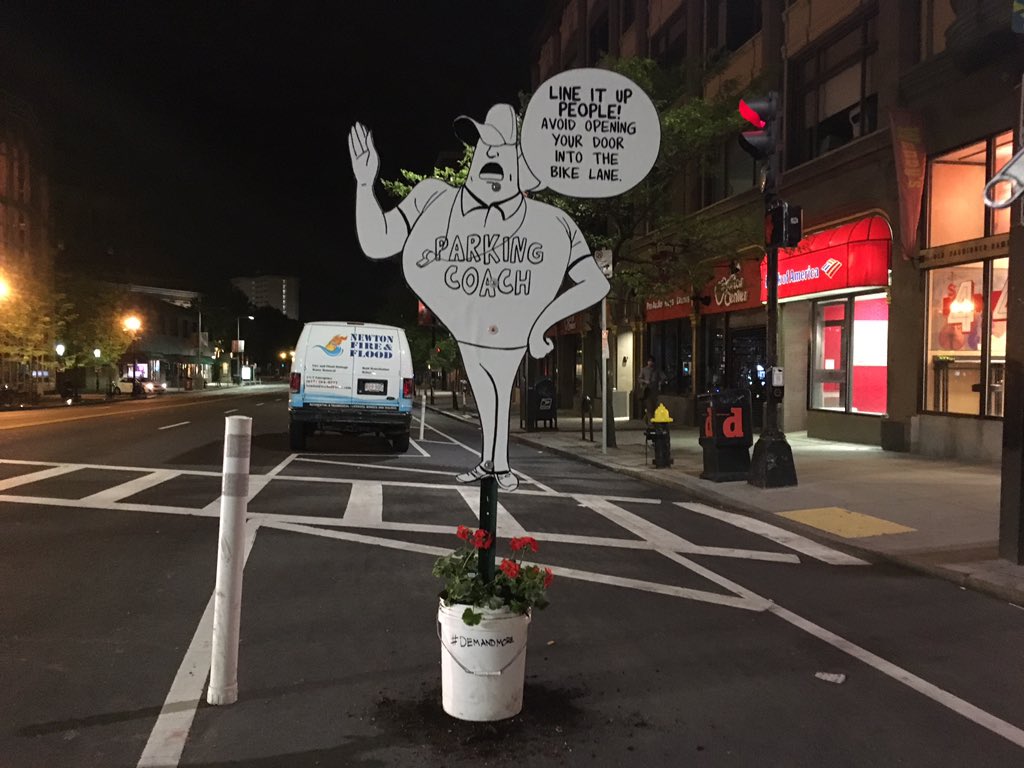 Cycling advocates in Boston have resorted to using life-size cut-outs as a means of persuading city officials to make bicycle safety more of a priority.

Indeed, over the weekend life-size cut-outs began appearing along Boston’s Massachusetts Avenue, serving as both a message to Mayor Martin J. Walsh, pointing out the need for the city to improve its cycling infrastructure, as well as urging motorists to more scrupulously honor the rights of cyclists.

For example, one cut-out depicts a female cyclist with a bubble-caption asking motorists to “Look for bikes before opening your door. (That’s what this buffer is for.)”

Another cut-out depicts a caricature of the mayor himself, who last week was criticized by cycling advocates, after he told a radio show that pedestrians and cyclists needed to take more responsibility for their own safety.

“You can’t be running across the middle of the street. You’ve got to understand — cars are going to hit you,” Walsh said during the interview, which was broadcast live from the WGBH Studio at the Boston Public Library. “People need to be more cognizant of the fact that a car is a car.” “When you’re riding, a car can’t stop on a dime,” he said. “And a bike can’t stop on a dime, so people need to understand that. All of us need to understand that we need to coexist together on the roads of our city, and on the streets of our city, and we need to stop running across the street and we need to start following the rules. The rules of the road are there for a reason.”

Earlier this month, a 29-year-old cyclist was killed in the city’s Back Bay area, after being struck by a hit-and-run driver.

Shortly after the interview, bicycle and pedestrian safety advocates called out Walsh for what they say were misguided and misinformed statements which seemed to place more blame on cyclists, than motorists.

He added, “People keep dying on Boston’s streets because pedestrians wear headphones and need education? You’ve got to be [expletive] kidding me.”

In an e-mail to the Globe, the group’s executive director, Becca Wolfs, said they were “extremely disappointed to read and hear the interview” with Walsh, which was published on WGBH’s website shortly after it aired.

“After people walking and biking have been hit and killed by people driving cars, people are quick to ask ‘Were they wearing a helmet? Were they wearing headphones, or looking at their phone?’ ” Wolfson said. “And in reality, we should be asking whether the driver was speeding, or whether they were distracted and on their phone. The answer is often yes.”

Wolfs believes city officials should be focussed on making the streets safer, rather than blaming victims.

Stacy Thompson, executive director of LivableStreets Alliance, which strives for better biking, walking, and public transit in the Boston area, said to the mayor’s credit, he cares about data and numbers.

However, Thompson added, if the Mayor were examine the data collected by his staff, “he would see that the vast majority of people injured while walking and biking are children or older adults,” and not necessarily people listening to their headphones and trying to dodge traffic.”

“It’s your grandmother, your child, your best friend — not a stereotype,” Thompson said.

Thompson further added, that Walsh’s comments conflict with the administration’s Vision Zero goal, which aims to eliminate serious traffic crashes in the city by 2030.

Another Boston-based cycling advocacy group, StreetPAC Mass, which works to elect officials who vow to improve the safety of city streets, also weighed in on the issue.

In a tweet, the group said that the mayor’s comments were “irresponsible.”

“Drivers were responsible for all 22 fatalities on Boston streets in 2016,” the group claimed.

In response, a cut-out caricature of the mayor himself, shows Walsh receiving advice from Boston native and academy award winner, Matt Damon, who grew-up just across the Charles River in Cambridge, Massachusetts.

Jonathan Fertig, who led the efforts to design and installed the cut-outs, said despite the heavy rain over-night the weekend, they were still in place this morning.