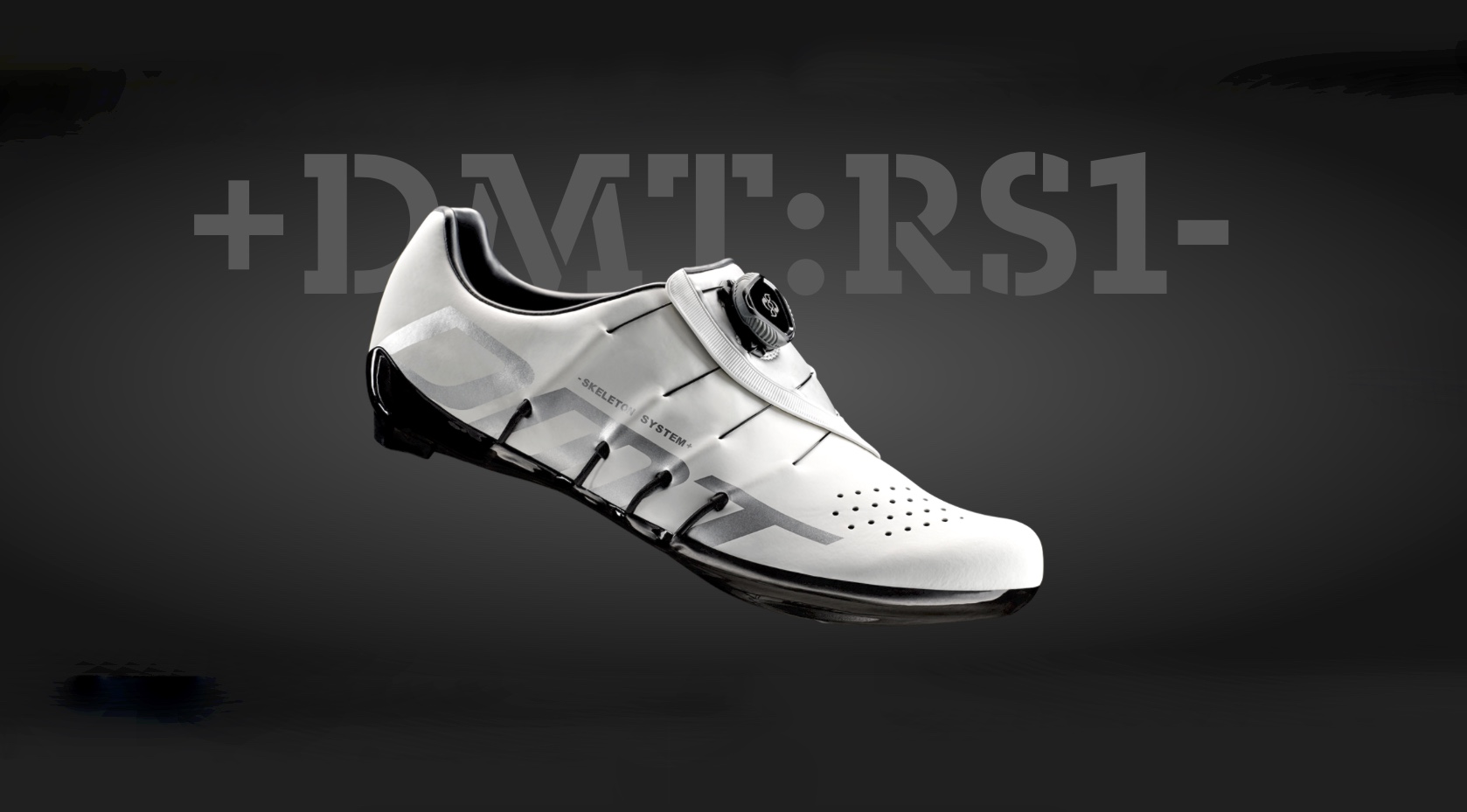 I was no-sooner set to crown DMT’s R1 as the best road shoe for 2017, the Italian brand threw a mesmerizing curve ball by announcing the launch of an even more sophisticated and lust-worthy model this Spring – called the RS1.

The mere sight of these futuristic, almost alien like shoes, made me yearn for a pair to review. And, as fortune would have it, DMT was delighted to send me a pair. Otherwise, a dead fish would have arrived at Pietro Caucchioli’s office.  🙂

As previously reported, the new RS1 was designed alongside none other than pro cyclist Elia Viviani, who according to DMT, spent considerable time helping them hone the shoe’s attributes over the last year, before releasing it this season.

Prior to, DMT says it spent years developing the RS1’s new skeletal system at their test facility in Italy, experimenting over-and-over again with advanced nylon tubes, specially designed cords and a radical new carbon sole and inside upper, which eventually came to comprise the new shoe.

Created as a single shell to eliminate the external heel counter and totally envelope the foot, the RS1 features the insertion of 3 nylon tubes for the passage of its BOA cables, and comprises a new skeleton carbon sole that’s made entirely of UD FAW 150 carbon fiber.

DMT says the combination of these innovative materials makes for a sole that’s extremely rigid and impact resistant, which is both stronger than steel and more conducive to maintaining high thermal stability.

To wit, “thus the sole becomes a single body that breathes, thanks to the front opening and the innovative midsole with its 5 mm diameter micro holes”, says DMT.

The RS1’s innovative integrated tongue and upper allow two traditionally separate parts, to be incorporated into a single piece construction.

According to DMT, “by constructing a shoe in this way, the integrated tongue and upper unites over the top of the foot and acts as one.”

DMT designed the RS1’s BOA closure system and upper in such a way, as to provide optimal comfort, ease of adjustment, while contouring the foot with a smooth, even closure that makes putting it on or taking it off effortless, while also ruling out any possibility of pressure points.

As a result, cyclists can easily fine-tune the RS1 to their desired fit, and make subsequent micro adjustments even under the most challenging riding conditions.

But, if you read my preview of the RS1 last April, you may already know about these features.

So, how does the RS1 perform?

For starters, the RS1 provides the same level of support and comfort as the R1, similarly anchoring the foot and ankle in an almost boot-like fashion, but with the feel of a slipper, while weighing in at a feathery 260 grams.

However, the RS1 takes things quite a bit further, by creating the sensation whereby the shoe feels almost like a secondary shell, enveloping the foot in a way that feels even more secure and fitted than R1. Moreover, while the RS1 relies on just a single BOA dial to adjust and fine-tune fit, it feels even more precise than most other dual BOA closure systems that I’ve experienced.

Curiously, just like the R1, DMT suggests that the RS1 is ideally suited for those cyclists who have a narrow foot with normal to higher arches, yet they fit my pancake-like dogs perfectly well – again offering plenty of room, comfort and support.

After spending hundreds of miles out on the road, I found that the RS1 not only extolled all of the virtues that came to define the R1 as my favorite road shoe, but they provided yet another level of stability and power transfer that eclipsed all others to date.

At the risk of resorting to silly analogies, my legs felt like connecting rods and my feet like pistons, while the RS1’s fired with each turn of the pedals – never giving up anything in the way of stability, power or comfort.

So, would I go so far as to call the RS1 game-changing?

That’s a phrase which has been arbitrarily applied to so many cycling products, so many times over the years, I’m reluctant to use it.

Perhaps, the best superlative to use in describing DMT’s new RS1 is “next generation’!