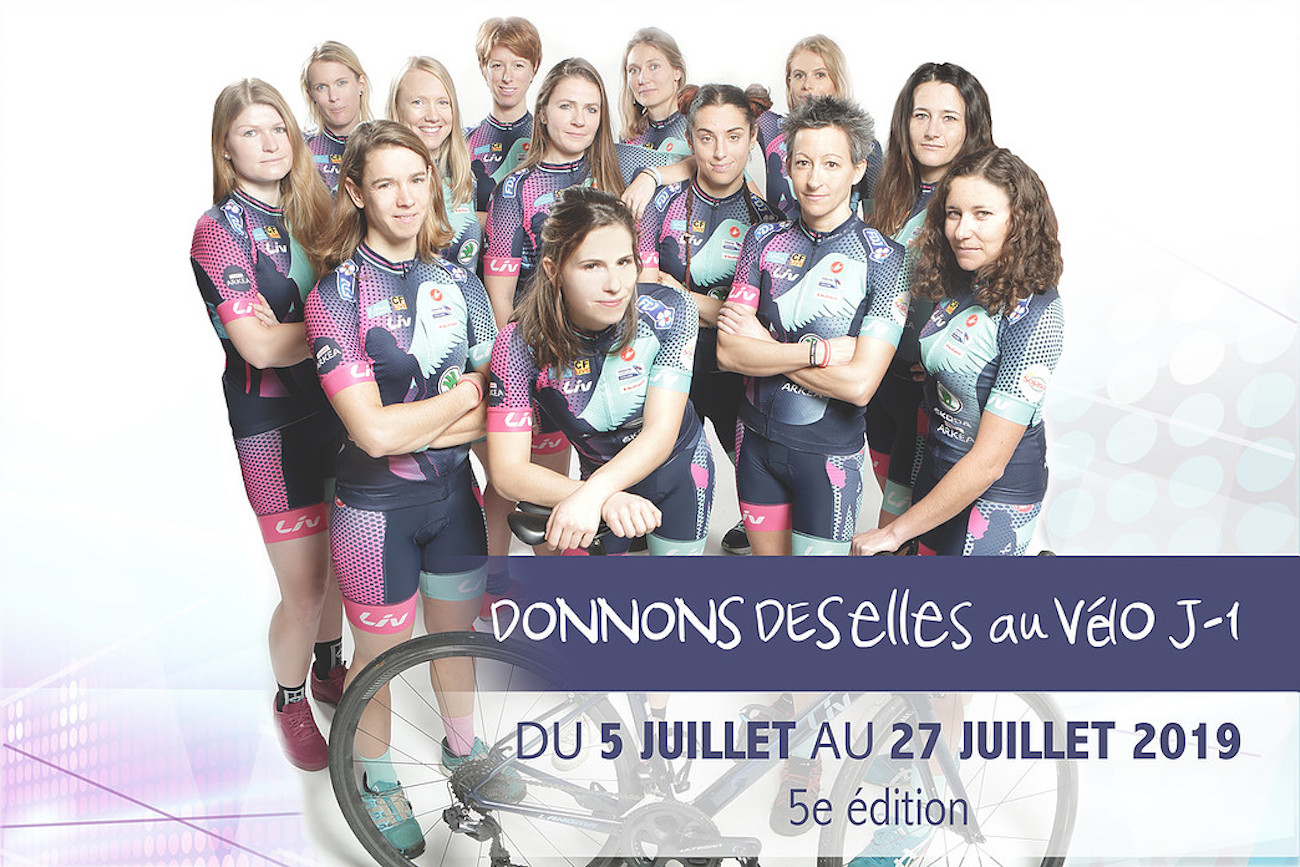 With 30 mountain passes and five summit finishes, the 2019 Tour de France route will be the most mountainous in the 106-year history of the event.

On July 6, the men’s professional road cycling peloton will set off from Brussels (Belgium) for a three-week journey covering 3460km to reach Paris (France) on July 28: a major challenge for the riders and a true sporting show for the fans. But what many people do not realize as they tune in to one of the most-watched sporting event in the world, is that the day before each stage, a group of women is tackling the same sporting challenge.

Donnons des elles au Vélo is a group of confirmed women cyclists with a clear message: they want to see the return of a women’s Tour de France.

“There is no high-profile women’s stage race in France,” laments Project Coordinator and one of the cyclists Claire Floret. “We want to encourage the organization of such an event, that would take place during the men’s race.”

A one-off event that has become annual

She never imagined in 2015 when she first embarked on the adventure accompanied by two other women, that the initiative would continue every year, with more and more supporters and increasing visibility.

“Nobody really believed in the success of this adventure before our departure. But we realized during the first edition that we were able to raise awareness, that a lot of people shared our message and that the media, public, partners and institutions were touched by the question and ready to commit further. If we wanted to change things, one year wasn’t going to be enough!”

From three participants in 2015, the peloton has grown over the years to 13 women for the entire three weeks, with an average of 80 to 100 cyclists joining them for each individual stage. Some 2200 cyclists, including nearly 1000 women, have taken part in the adventure since 2015.

Spectators already gathered along the roadside for the Tour de France, now await the women who lead the way the day before the men’s peloton: “The first two years we rode by almost anonymously,” remembers Claire Floret. “But as the years pass, more people know about our project. The support is just incredible. It gives us wings in the mountain passes!

“When we are waiting for the last riders at the top of the passes, we take the opportunity to talk to the spectators. They are all nostalgic for the era of the Women’s Tour de France, which took place in the 80s, and are very enthusiastic about the idea of a women’s event at the same time as that of the men.”

The highs and the lows

Five years of riding the roads of the Tour de France have left unforgettable memories, both bad – food poisoning that meant riding two stages without being able to eat – and incredibly positive – the first time they saw spectators brandishing banners and writing slogans on the road such as `Go girls` and `When for a women’s Tour?`

“That was when I realized that our efforts on the roads of France were not in vain!” says the Project Coordinator.

Support from the pros, media and sponsors

Donnons des elles au Vélo  has earned the support of riders in both the men’s and women’s professional peloton, benefitting from the patronage of Pauline Ferrand-Prévot in 2017 and Audrey Cordon Ragot and Warren Barguil in 2018. Last year Bruno Armirail (Groupama FDJ) rode with the women for part of one stage, while several riders and UCI Teams use their social media platforms to relay the women’s activities and messages.

France Television has given them daily visibility, and this year an American film crew will produce a documentary.

The initiative benefits from increasing sponsorship support, including from some of cycling’s historic partners, for example Sojasun, la Française des Jeux and Skoda. Some 80% of this year’s budget has already been confirmed, and the women are optimistic they will find the remaining 15,000 euros to finish their 2019 challenge in the black.

Preparation for the 2019 edition began before the announcement of the route last October. Quite apart from training for three weeks of solid cycling, the logistics are enormous. The 13 women will be accompanied this year by a team of 10, including photographer, physios, mechanics and motorbike escorts.

The message from Donnons Des elles au Vélo  focuses on, but is not limited to, the Tour de France: “This monument of cycling’s history, which all cyclists dream of and which has an enormous worldwide following, must be a priority when it comes to accessibility to women,” says Claire Floret. “Maybe not over three weeks to start with but in a format close to that of the Giro Rosa: around 10 days over the final parts of the men’s stage, with 120 to 150km each day.”

Following the example of one-day Classics

She is confident that the women’s message will be heard in a favorable light given the recent progress of women’s cycling.

“A lot of effort has been made at one-day races but there is still a great deal to accomplish when it comes to stage races,” she concludes.

The 2019 route promises to be a demanding one, but the women are taking it in their stride.

Claire Floret: “The announcement of the route always provokes tension and excitement… Will it be particularly mountainous? How steep will the percentages be? Which mountain passes will we climb for the fourth time? Which will we discover for the first time? Are the transfers long, reducing our rest time?”