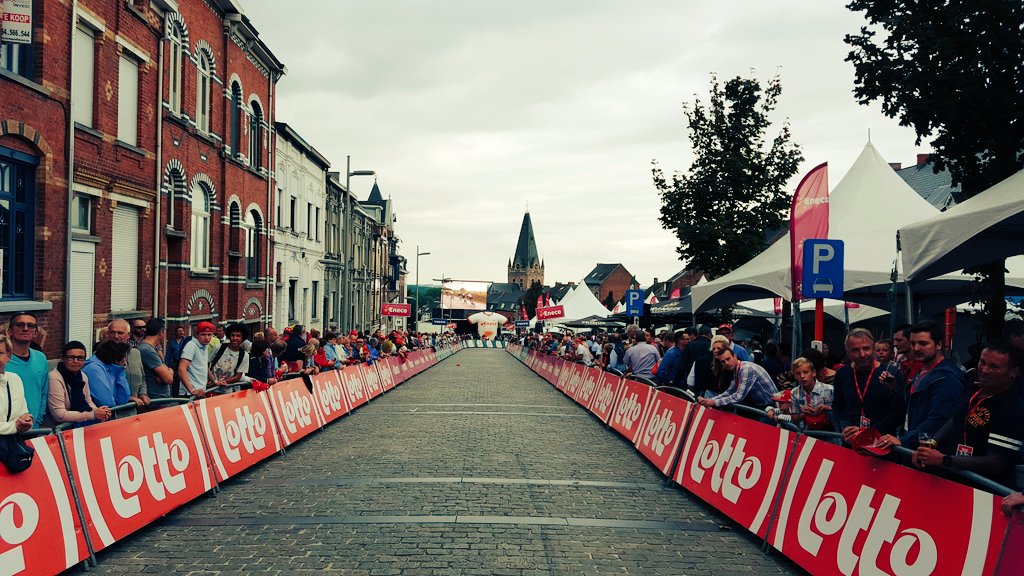 Edvard Boasson Hagen (Dimension Data) won the 7th and final stage of the Eneco Tour today, after jettisoning his fellow breakaway companions on the lower slopes of the Geraardsbergen climb, to beat Nikki Terpstra (Etixx-QuickStep) and Oliver Naesen (IAM Cycling).

Meanwhile, race leader, Rohan Dennis, was forced to abandon the race after crashing hard during the last 60 kilometers, ultimately handing the overall victory to Terpstra.

Dennis went into today’s final stage with a 27 second advantage over Dutchman Terpstra, who started in fifth overall. However, a heavy fall for Dennis during the stage that featured cobbles and bergs used in the Classics first saw the Australian lose time, and then drop out completely due to his injuries.

Meanwhile, Terpstra was riding hard in the front group of three riders in a seriously fractured race. The stage win came from his breakaway companion Edvald Boasson Hagen (Dimension Data), who had launched a later attack to win by a couple of seconds ahead of Terpstra with Oliver Naesen (IAM Cycling) in third.

Behind, former race leader and double stage winner Peter Sagan (Tinkoff) was chasing in a group with Tom Dumoulin (Giant-Alpecin) and Greg Van Avermaet (BMC Racing). They couldn’t catch the lead trio, and Sagan settled for sixth to finish the race in third spot overall behind Terpstra and Naesen.

After a spectacular final stage Niki Terpstra has conquered the Eneco Tour. The 32-year-old Dutchman went on the offensive with Edvald Boasson Hagen, who won the finale stage in Geraardsbergen.

The breakaway didn’t get too much wiggle room as a fine selection of Flemish cobblestoned hills promised to turn the race upside down. Via the Hurdumont, D’Houppe, Tenbosse and Denderoordberg the peloton hurtled towards the infamous Muur van Geraardsbergen, which had to be conquered three times with a finish on the Vesten in Geraardsbergen. The nine leaders only received two minutes by the time they first arrived in Geraardsbergen.

The first passage on the Muur had points in store for the Primus Checkpoint. Primus combativity leader Bert Van Lerberghe (Topsport Vlaanderen-Baloise) wasn’t present in the leading group, but the young Belgian had already done enough to secure his green jersey. After the first ascent of the Muur, Tinkoff took control of the chase for their leader Peter Sagan, bringing the gap down to a mere minute. Wellens decided to up the pace in the leading group and only Curvers, Nordhaug, Verona and Anacona managed to follow.

The second passage on the Muur of Geraardsbergen was made even trickier when it started raining, which inspired Wellens to attack again. This time he succeeded and the Belgian was all on his own.

Back in the bunch a crash ended the chances of leader Rohan Dennis and Astana’s Lars Boom. Both managed to continue, but lost valuable time in a pulsating finale.

While Wellens was caught with less than 50 kilometers to go, nine riders decided to take matters into their own hands, including Niki Terpstra (the best placed rider at 27 seconds behind Dennis), Naesen, Greipel, Van Poppel, Sutterlin and Boasson Hagen. Their attack was also affected by the rain, with Greipel and Van Poppel crashing out of the lead. The remaining even leaders worked together superbly to increase their gap, being chased by a group with Sagan, Greipel, Dumoulin, Degenkolb, Stybar and Debusschere.

On the final ascent of the Muur Juul Jensen and Lutsenko had to let the other leaders go. On the Rosberg Terpstra took 9 seconds in the Eneco Golden Kilometer and he would fight for the victory with Jungels, Naesen, Sutterlin and Boasson Hagen, as the chasing group with Sagan would never make it to the front again.

The Denderoordberg, with six kilometres to go, signalled the end for Sutterlin. Naesen, Boasson Hagen and Terpstra took on the final ascent of the Vesten. Boasson Hagen proving to be the strongest, beating Terpstra and Naesen after an exciting finish. Tom Dumoulin and Greg Van Avermaet rounded out the top-five.

In the general classification Terpstra took the overall victory away from Dennis. After a brilliant final stage Naesen took second place, followed by Peter Sagan.