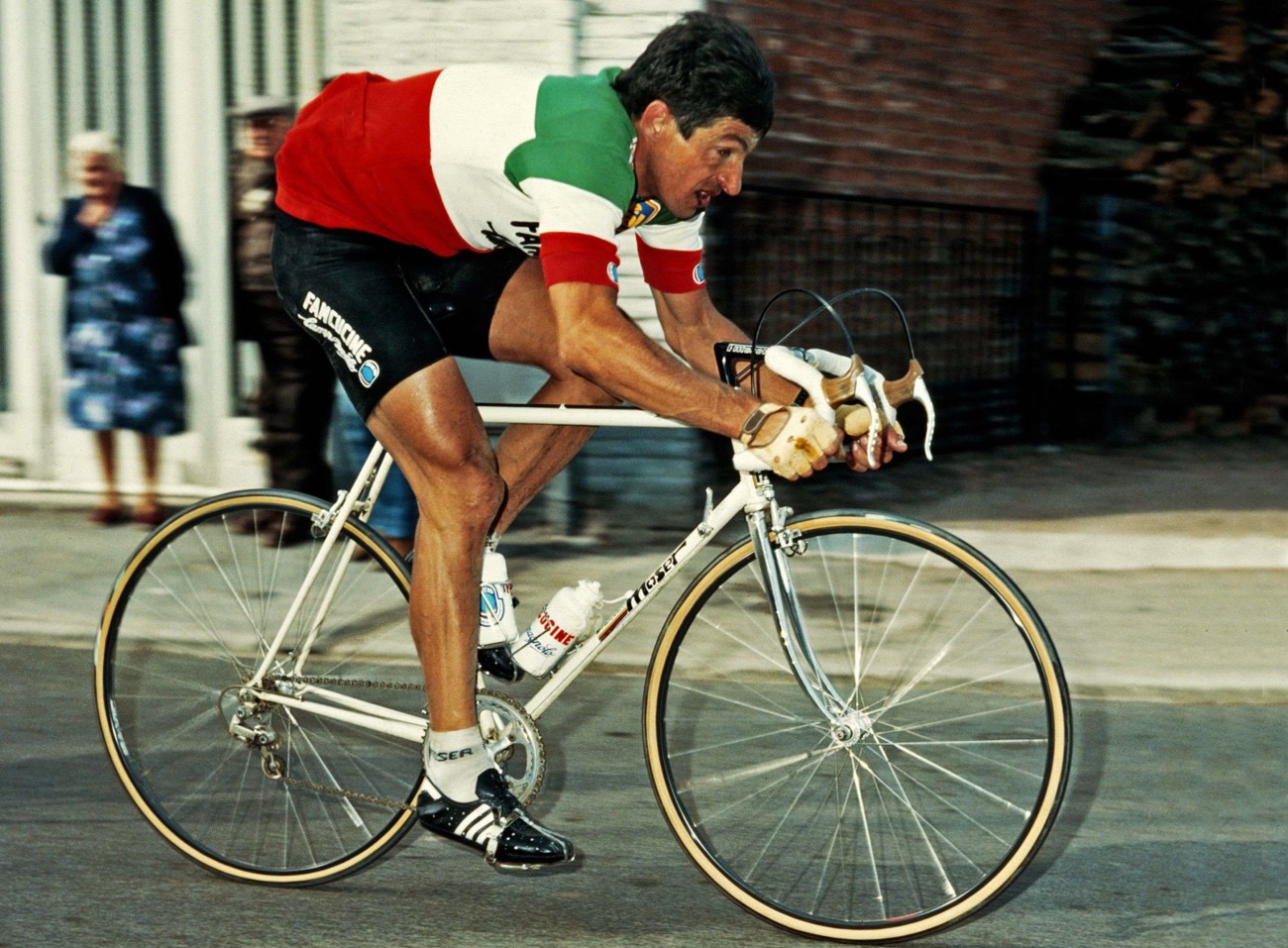 20 Jun 2016
By Campionissimo - In LATEST ARTICLES, THE PODIUM

A belated happy birthday to Francesco Moser, who was born on June 19, 1951.

Nicknamed “Lo sceriffo” (The sheriff), Moser was a dominant figure in the sport of cycling from the mid-1970s to the early 1980s, winning such prestigious races as the 1984 Giro d’Italia, the 1977 world road racing championship and six of the five Classics, as well as setting the Hour Record in 1984.

Moser turned professional in 1973, showing a stylish pedaling style. But, due to his powerful build, “climbing” didn’t come naturally to the Italian rider.

Moser was also an accomplished track rider as well, winning 15 of the annual Six Day race series alongside René Pijnen.

After finishing second in 1974 behind Roger De Vlaeminck and in 1976 behind Marc Demeyer of Belgium, Moser finally won Paris–Roubaix, his favorite race, three consecutive times. Moser had seven podium finishes in Paris–Roubaix; only De Vlaeminck, with nine, has more. In 1978, he beat De Vlaeminck and Jan Raas of the Netherlands; in 1979, he beat De Vlaeminck and Hennie Kuiper of the Netherlands; and in 1980, he beat Gilbert Duclos-Lassalle of France and the German, Dietrich Thurau. Moser came in third in 1981 behind Bernard Hinault and Roger De Vlaeminck, and was also third in 1983 behind Hennie Kuiper and Gilbert Duclos-Lassalle. He rode Paris–Roubaix in his final season as a cyclist in 1987. Other victories include the 1975 and 1978 Giro di Lombardia and the 1984 Milan–San Remo.

Moser had some success in the three-week grand tours. He rode the Tour de France in 1975, and although he won two stages, led the race for seven days and won the young rider competition, he never rode the Tour again; the mountains did not suit him. However, he won the 1984 Giro d’Italia, in front of Laurent Fignon of France and Moreno Argentin of Italy. Taking advantage of an unusually flat course, Moser used time-trialing ability to overcome what others had gained in the mountains. He also won the points classification in the Giro d’Italia in 1976, 1977, 1978 and 1982.

He competed in the individual road race and team time trial events at the 1972 Summer Olympics.[3]

Moser won the 1977 world road racing championship in San Cristobal, Venezuela, in front of Thurau and Franco Bitossi. Moser was also silver medallist in 1976, behind Freddy Maertens of Belgium and second in 1978 to Gerrie Knetemann of the Netherlands.

On 19 January 1984, in Mexico City, Moser broke the 1972 hour record of Eddy Merckx. He rode 50.808 kilometers, on an aerodynamic bike with full disc wheels more advanced than the conventional bike Merckx used in 1972. As a result, in 1997 the Union Cycliste Internationale banned hour records set on bikes featuring technological advantages.[4] Under the new rules, Merckx’s record wasn’t broken until 2000. Moser auctioned his bicycle to benefit UNICEF.

Moser has since 1999 been chairman of the Cyclistes Professionels Associés, CPA, founded 19 May, after the 1999 Giro d’Italia. The CPA is a union for professional riders of TT/I and TT/II league of teams (now UCI ProTeams and UCI Professional Continental Teams, respectively).