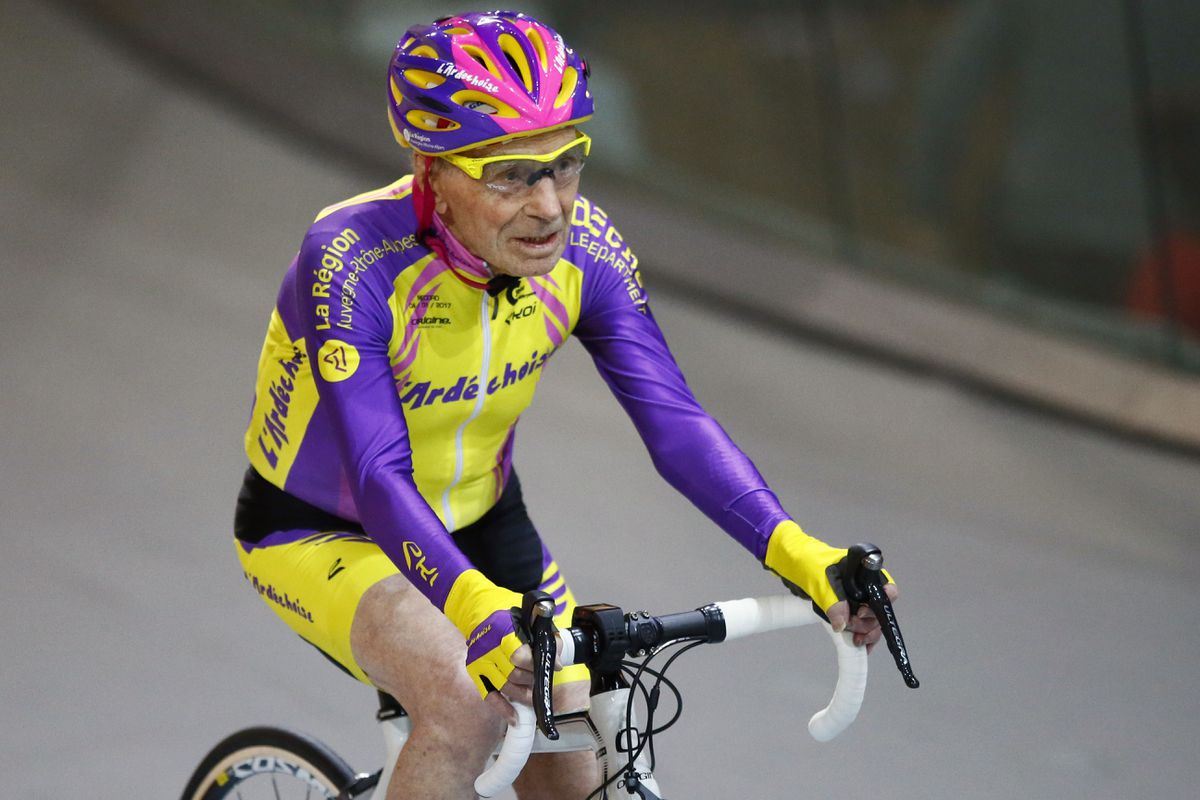 French cycling hero, Robert Marchand, announced today that he is retiring from the sport at age 106.

Last January, Marchand set a new Hour Record in his age group, after covering 22.5 kilometers (14 miles) at the national velodrome in Saint-Quentin-en-Yvelines west of Paris.

Since he turned 100, the Frenchman has been setting new records for his age group on the velodrome. In February 2012 he set the mark for the one-hour record at 24.250 kilometers and improved on that two years later with 26.927 kilometers – a time that fit 20-year-old non-cyclists would struggle to better.

Between those two efforts, he rode 300 laps of the Parc de la Tete d’Or Velodrome in Paris in four hours, 17 minutes and 27 seconds – equivalent to 100 kilometers.

To maintain his fitness, Marchand stretches and does resistance exercises each day plus rides his indoor traine. He credits his longevity to a diet that contains a lot of fruit and vegetables, a small amount of meat, “not too much coffee”, “no cigarettes” and “very little alcohol” – and sport.

Born in 1911, Marchand began cycling at 14 years of age. He later lived lived in Canada and Venezuela and worked as a fireman, market gardener, show salesman and wine dealer, and competed as an amateur boxer.

He started cycling again in 1978 at 67 years of age, building up the distances and training with much younger riders.

At the age of 89 he retired from work and trained to ride in the famous Bordeaux-Paris ultra-distance event, covering the 600 kilometers in 36 hours.

His friend and neighbor, Christian Bouchard, is quoted as saying he will no longer be pushing himself to set records.

“His doctors no longer want him to make great efforts,” he said.

Charlotte Faride-Blandiot, mayor of the town of Mitry-Mory where Marchand lives, said, “Robert took this decision to give up competing at the age of 106 following medical advice, after several world records and a world championship won last summer!”

“What a palmarès but above all what an example of simplicity, commitment and respect for the values ​​of sport and solidarity of a man as brilliant on the road as in conversation.”

Marchand says he will just cycle for pleasure.