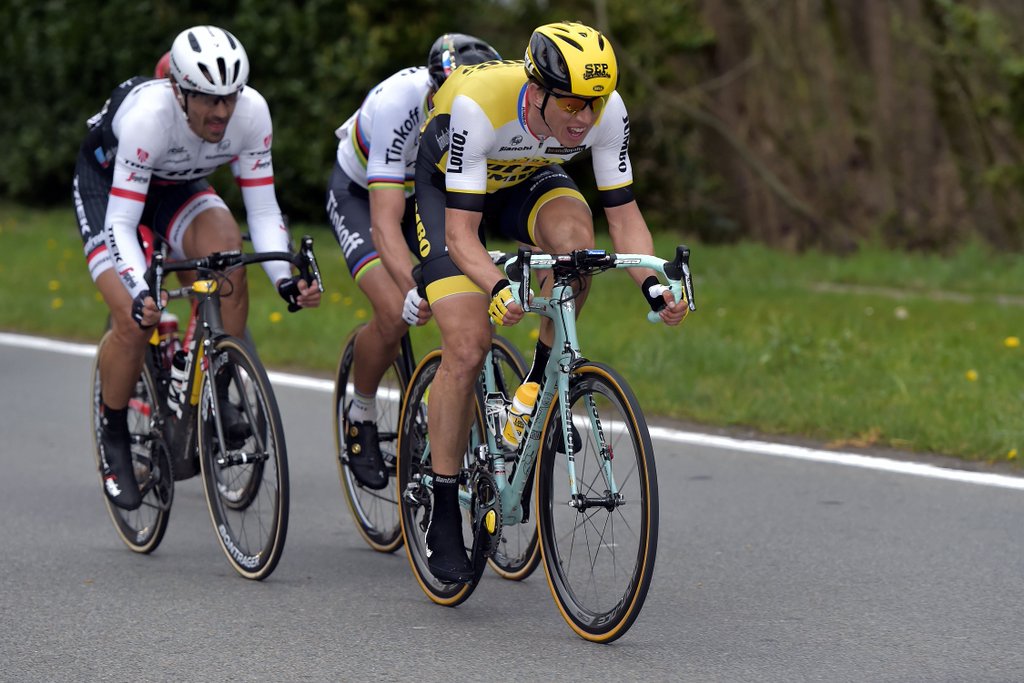 “Why would I panic?” Sagan said of his many second places. “In life there’s more important things thing victories or second places. I’m riding for passion, not for ambition.”

Sagan dedicated the win to his father-in-law, who he said “had a hard time yesterday” without wanting to add anymore information.

With his win, Sagan became the first world champion to win Ghent-Wevelgem since Rick Van Looy in 1962.

“Cycling’s like that,” added Sagan. “The jersey or not, I’m happy to win this race.”

“It was a little bit different today. What do you want to hear? I think everyone knows I was tired. Yeah. I worked a lot Friday and then in the final, I was like how I was. There’s not too much story about it,” Sagan explained.

“Today, Vanmarcke was pulling, but he stopped, but cycling is like that. I said I won’t make the same mistake as before and pull to the finish. We had a good gap to the group. The guy from Katusha began early and I said, ‘I have to go behind him,’ and he pulled me a very good sprint.”

From there, the quintet went on to established a seven minute advantage over the peloton, and remain out front until they were eventually caught just before the fourth climb of the day – the Côte du Ravel Put.

Not long after, Matteo Trentin initiated a breakaway move of his own on the Monteberg climb, only to be  joined by Tiesj Benoot (Lotto-Soudal), Daniel Oss (BMC), Giacomo Nizzolo (Trek-Segafredo) and again Pavel Brutt.

However, the escapees’ time out front was short-lived, giving way for Viacheslav Kuznetsov (Katusha) to initiate a lone attack from within the chase.

With less than 40 kilometers to go, the Russian rider had opened up a gap of nearly a minute, while heading into the two final key climbs of the Baneberg and the Kemmelberg.

Back in the peloton, Vanmarcke set-off in pursuit of Kuznetsov, but he was quickly joined by Sagan and Fabian Cancellara along the steep side of the Kemmelberg.

Meanwhile, Stybar, Van Avermaet and Rowe were not far behind over the top, but the trio struggled to close the final few meters after the descent. And, with 30 kilometers remaining, they were reclaimed by the peloton.

Back up front, the four escapees continued to remain out front, with Sagan, Cancellara and Vanmarcke all taking massive turns at the front, while Kuznetsov appeared to be content riding in their slipstream.

Back in the chase, the peloton failed to organize an effective chase, with the gap between them and leaders now out to more than half a minute.

With five kilometers to go, the breakaway riders were still well outside the grasp of the peloton, with each rider taking a turn at the front.

However, as Cancellara was leading the way into the final kilometer, Kuznetsov decided to attack inside the final 200 meters. But the Swiss rider was quick to mark his move, as was Sagan.

Moments later however, Cancellara began to fade, leaving Sagan, Kuznetsov and Vanmarcke to battle it out during the closing 100 meters, with the World Champion proving to be the more experienced tactician.

Chantal Blaak soloed to her third victory of the season in today’s women’s Gent Wevelgem classic.

The Dutch rider attacked out of a group of approximately 20 riders inside the final ten kilometers.

From there, Blaak immediately opened up a slight a gap, and never looked back. She reached the finish line 1:24 ahead of a seven-rider chase group that included Ellen van Dijk.

“It feels so good,” said Blaak. “I’m really happy to win this race. The plan was to have numbers in the front today, and we had numbers. Then you have to finish it together. It was cool that we did it.”

With the Gent Wevelgem win comes a change in the UCI Women’s WorldTour rankings, as Blaak assumes the lead from world champion Lizzie Armitstead in inaugural series. It also marks a continuation of a stellar start to the season for Blaak, who finished second at Omloop Het Nieuwsblad to Armistead and won Le Samyn and Ronde van Drenthe.

Armitstead opened the series with a win at Strade Bianche, while Blaak won from a small group at Ronde van Drenthe.

The cobbles and climbs of Gent Wevelgem serve as a fitting warm-up ahead of next weekend’s Ronde van Vlaanderen.

Today’s fifth edition of the women’s race covered 115 kilometers with the race’s five ‘hellingen’ grouped in the middle of the route.

When the race reached the first ascent of the Kemmelberg at the 51-kilometer mark, the peloton had split into two distinct groups.

Following the first passage of the Kemmelberg, an elite selection had been made. Twenty-seven riders formed the leading group. Boels-Dolmans Cycling Team had six riders in the selection.

“It was a really windy race,” said Blaak. “It split already early. The Kemmelberg was really hard, and after the Kemmelberg, we were still with the whole team, so that was impressive. The girls did such a good job.”

From there, the Dutch rider immediately opened up a small gap on three chasers – Lisa Brennauer (CANYON//SRAM), Emma Johansson (Wiggle High 5) and Annemiek van Vleuten (ORICA-AIS), and proceeded to hold-off any challenges all the way to the finish.

“We started to play with numbers,” said Blaak. “In the end, I have an attack and the confidence that the girls were behind me. It was really good teamwork today.”

“It was so nice to race again and especially with this team,” said Van Dijk. “It’s great fun to attack one by one, knowing you always have back-up. Danny [Stam] has smart tactic and when Chantal made a good attack, we closed the gap to the three chasers. They stopped work, and Chantal could complete a super strong solo.”

“Personally, I’m super happy to be back and to be in the front of the race again,” added Van Dijk, who finished in eighth place from the first chase group. “We made the race as a team, and it definitely was a tough one! Looking forward to more in the coming weeks.”

The UCI Women’s WorldTour continues next Sunday with the Tour of Flanders.

“Next week is Flanders,” said Blaak. “I’m really looking forward to starting in this [Women’s WorldTour] jersey at my favorite classic.”