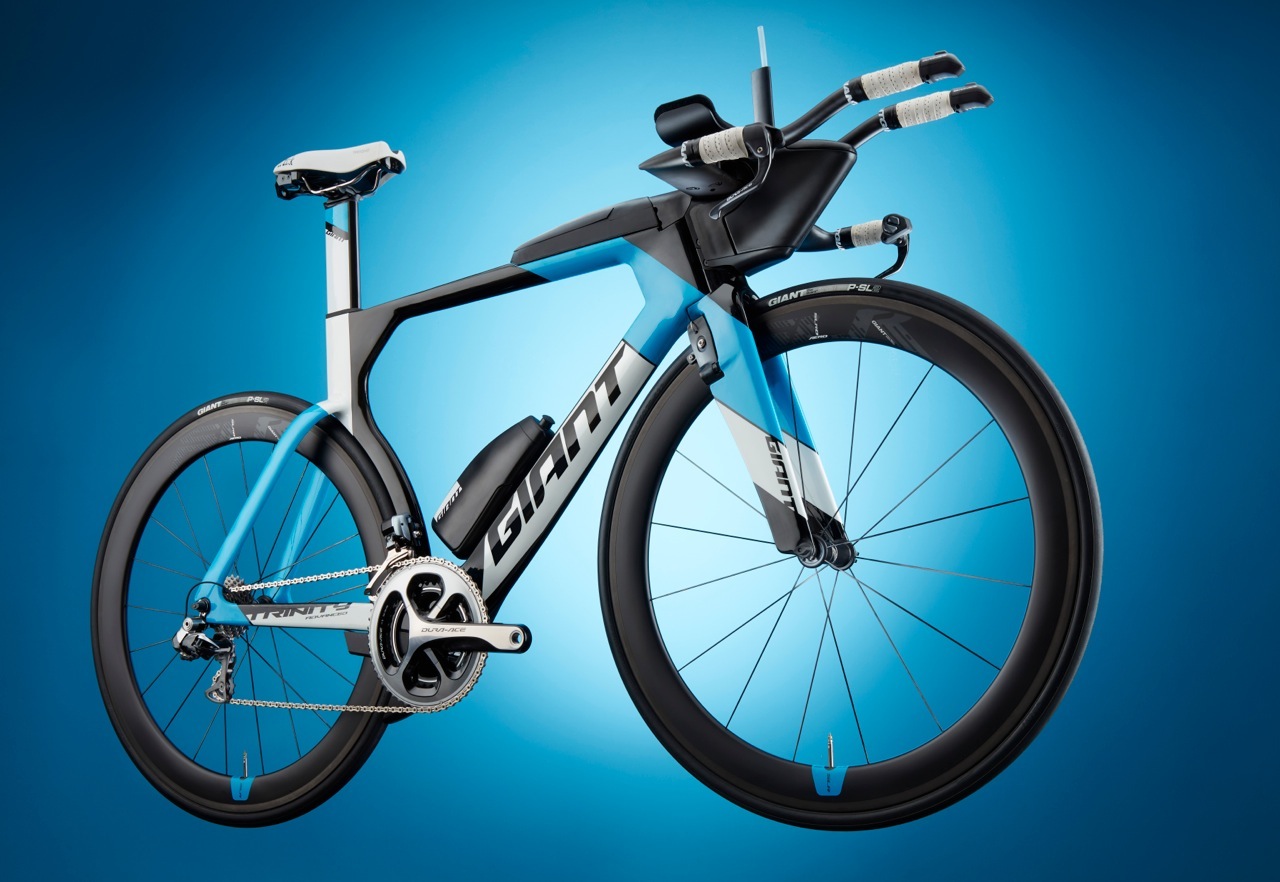 08 Oct 2015
By Gianni Pericolo - In LATEST ARTICLES, THE DOUBLE DIAMOND

What better place to unveil an all-new time trial/triathlon bike, than at the Ironman World Championships in Kona, Hawaii?

Giant apparently thought so, when they decided to debut their latest wind-cheating road bike – the Trinity.

The radical looking Trinity boasts plenty of time trial and triathlon specific features, to accommodate even Giant-Alpecin’s Tom Dumoulin, who’s been riding the new Trinity for the latter part of this season. But, back to the launch.

The flagship Trinity Advanced Pro model, which is being raced at Kona by Ironman pro Tim Van Berkel, is engineered and designed to be the world’s fastest triathlon bike in real-world racing conditions. It features Giant’s AeroSystem Shaping Technology and a number of innovative triathlon-specific features including the AeroVault integrated hydration and storage system to give triathletes a built-in advantage on race day.

“One of the things I love most about this new Trinity Advanced Pro is that it’s a full-on race-ready machine right out of the box,” said Van Berkel, who won last month’s Ironman 70.3 Sunshine Coast triathlon on a prototype model. “From the aerodynamic frame and fork shapes to the new geometry and positioning and integrated hydration and storage—it’s everything you need to go faster in training and racing.”

Using extensive Computational Fluid Dynamics (CFD) analysis and dynamic wind-tunnel testing, more than 250 frame configurations were developed and tested before the Trinity Advanced Pro design was finalized. Giant worked closely with the Aero Concept Engineering facility in Magny-Cours, France, during this process. Together, ACE and Giant engineers created a dynamic mannequin with anatomically correct articulating legs to accurately measure not only pressure drag and friction drag, but also the precise aerodynamic interaction of the rider and bike while in motion.

The final version of the Trinity Advanced Pro was tested alongside four key competitors at the wind-tunnel. Going against the Cervélo P5, Scott Plasma 5, Trek Speed Concept and Specialized Shiv, all outfitted with hydration and storage systems, the Trinity proved to be the most aerodynamic as a complete race-ready unit.

“We tested each of these bikes with and without their hydration and storage units with the goal of understanding which would be the most aerodynamic in a race-ready configuration,” said Giant On-Road Category Manager Nixon Huang. “The Trinity was competitive with the others when tested bare. And with the add-ons necessary for real-world triathlon racing, it was not only the fastest, but it was also the only bike that proved to be more aerodynamic with its hydration and storage components than without.”

The Triathlete in Mind

Beyond the AeroSystem Shaping Technology, a design process that analyzes the distinct airflow conditions of each area in the frame and fork to minimize drag and control airflow of the entire system across all relevant yaw angles, Giant also designed a number of triathlon-specific features into the bike. The AeroDrive Tri fork is engineered with Advanced-grade composite material and a triathlon-specific 5:1 airfoil shape. Combined with an integrated stem design, this system improves aerodynamic performance while maintaining precise steering precision.

A key component of the rider cockpit is the new AeroDrive Tri Base Bar. This composite bar features a 5:1 airfoil shape and has a reversible design that offers 40 millimeters of height adjustment. The SpeedControl brakes are also designed for triathlon, with both front and rear units integrated and hidden from the wind. The front brake is designed to match the profile and trailing edge of the fork, and the rear features an innovative fairing that saves 3 watts of drag at 50 kph.

One of the most distinctive elements of the Trinity Advanced Pro design is its integrated AeroVault System, which gives triathletes easy access to hydration, nutrition and race essentials such as tools and spare tubes. The AeroVault’s front hydration unit provides up to 700 milliliters of volume, depending on frame size, with an easy-access port on top. Additional hydration comes with the AeroVault downtube bottle, a 440-milliliter unit that’s optimized and hidden from the wind by the frame’s specially designed downtube.

The AeroVault storage box is integrated into the top tube behind the stem. It provides 290 milliliters of storage for on-bike nutrition or spare items. Its shape improves aero performance and maximizes standover height, a common weakness with aftermarket storage options. The soft cover allows access from either side of the box and prevents water and sweat from getting inside. It can also house the junction box for Shimano Di2 models, allowing easy adjustments and battery charging.

Giant engineers went to great lengths to improve the Trinity’s geometry and adjustability for triathletes. The frameset is now offered in four frame sizes instead of three. The AeroDrive base bar, arm rests and extensions all feature a wide range of quick and easy adjustments.

The 2016 Trinity triathlon range features two options: the Trinity Advanced Pro, which comes stock with the AeroVault System, AeroDrive Tri components and integrated rear brake fairing; and the Trinity Advanced, which features the same Advanced-grade composite frame but without the integrated AeroVault system, rear brake fairing and AeroDrive fork, stem and base bar.

For road racers, the Trinity Advanced Pro TT frameset features the same Advanced-grade composite frame along with a special AeroDrive TT Advanced-grade fork, stem and handlebar that’s UCI legal for time trial competition. The TT frameset was developed and tested with pro riders from Team Giant-Alpecin. Pre-production versions of the frame have already been ridden to victories at major pro races including Tom Dumoulin’s stage win at the Vuelta a España.

The range of new Giant Trinity triathlon and TT bikes will be available in select markets through Giant retailers starting in November.