Meanwhile, Alberto Contador managed to retained his grip on the maglia rosa., after finishing safely in the peloton.

Zakarin undertook a bold move during the final 20 kilometers, after breaking clear on the third of three ascents of the challenging Tre Monti climb.

Zakarin held on to take a memorable victory by 53 seconds over the chasing group, which was led over the line by Colombia’s Carlos Betancur (Ag2R-La Mondiale).

The overall standings remain unchanged despite an attack by race leader Alberto Contador on the fourth and final ascent of the circuit climb inside the last 10km of the stage.

Tinkoff-Saxo’s Contador was reeled in and finished safely in the main pack 58 seconds down on Zakarin to retain his three-second lead over Italy’s Fabio Aru (Astana).

Richie Porte (Team Sky) had a quiet day in the saddle after the setback of being docked two minutes by the race organisers for his part in the wheel-change imbroglio that animated the closing moments of Tuesday’s stage 10.

Porte is currently 12th place on GC over three minutes down on Contador thanks to a combination of that penalty and the time lost for the initial puncture.

Rigoberto Uran (Etixx-QuickStep) crashed on the slippery road on the penultimate lap but managed to fight back into contention to finish in the group of main favourites. Uran stays sixth on GC at 2:10.

After 25km of aggressive racing following the start in Forli, a break of ten riders managed to extricate itself from the rain-soaked peloton on the first of two Cat.3 climbs.

Eager to avoid a repeat of Tuesday’s stage – where the was allowed to stay clear – the peloton monitored the gap closely, with the BMC’s  Philippe Gilbert doing most of the work.

With Intxausti picking up enough points to move back into the blue mountains jersey, the advantage of the break dropped to as low as 1:20 as the break embarked on the second of three ascents of Tre Monti with 40km remaining.

But heavy rain led to inevitable slower speeds in the peloton, as Tinkoff-Saxolooked to keep their man, Contador, out of trouble.

BMC upped the chase, leading Stefan Kung to momentarily pull clear of the pack on a descent. Kung had almost caught the remnants of the break by the time he was himself reabsorbed back into the streamlined peloton, by now down to around 50 riders.

The Orica-GreenEdge team of Michael Matthews also committed themselves to the chase – but it proved too much, too late after Zakarin caught his fellow escapees napping with his unexpected attack 20km from the finish.

After creating a minute’s advantage over the disorganized chase, Zakarin had only to negotiate the final descent to the finish to secure the biggest win of his career.

Back with the peloton, the race leader tested his legs near the top of the final ascent of Tre Monti to open a little gap over his GC rivals.

But, the Spanish rider was reeled in shortly after the summit before Gilbert launched a last-ditch effort to bridge the gap to the escapees.

Contador’s move surprised some of his teammates, with Mick Rogers admitting, “I don’t know what that was about, but you know Alberto – when he feels good, he attacks, and that’s why he’s such a great rider.” 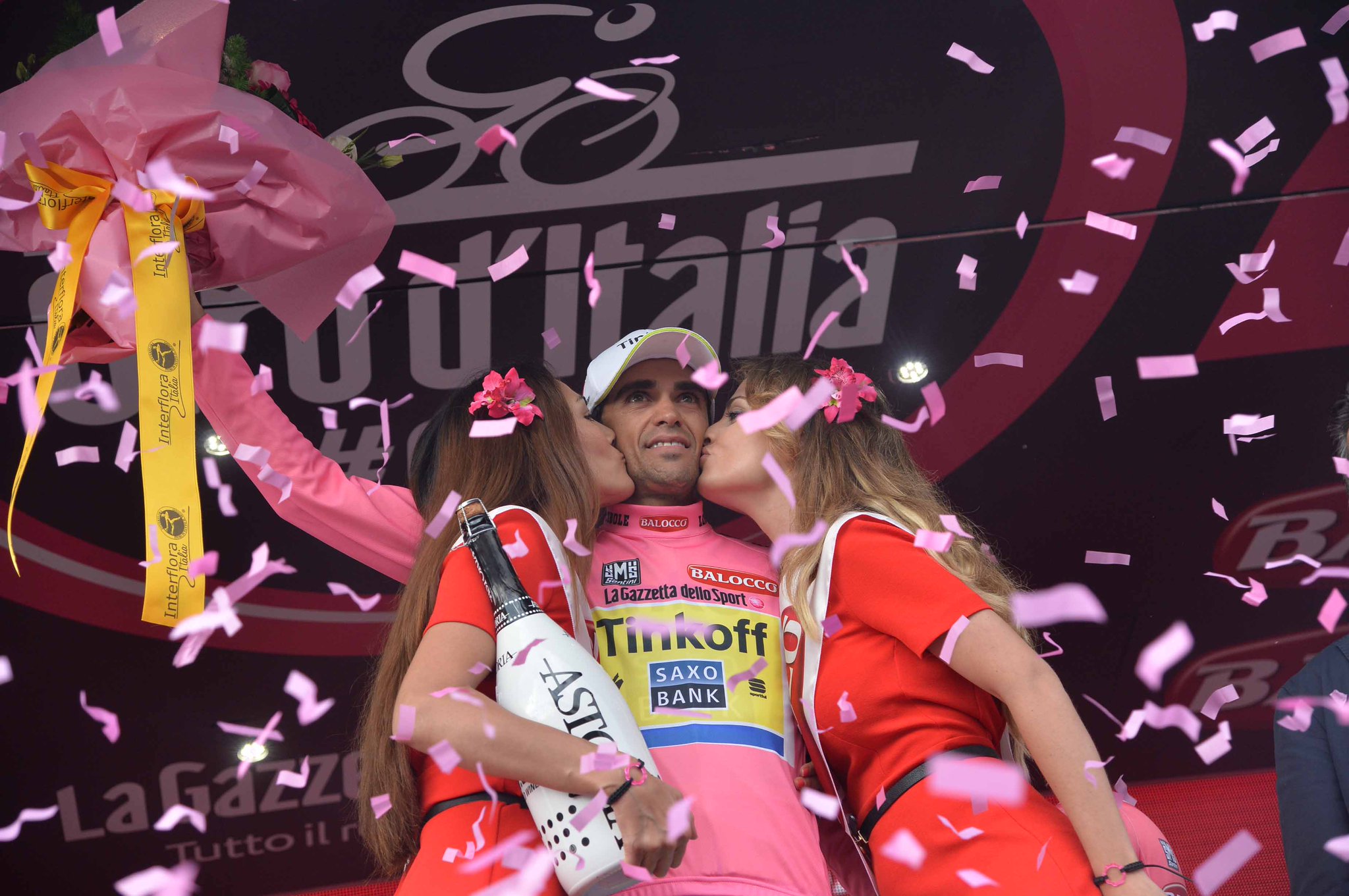