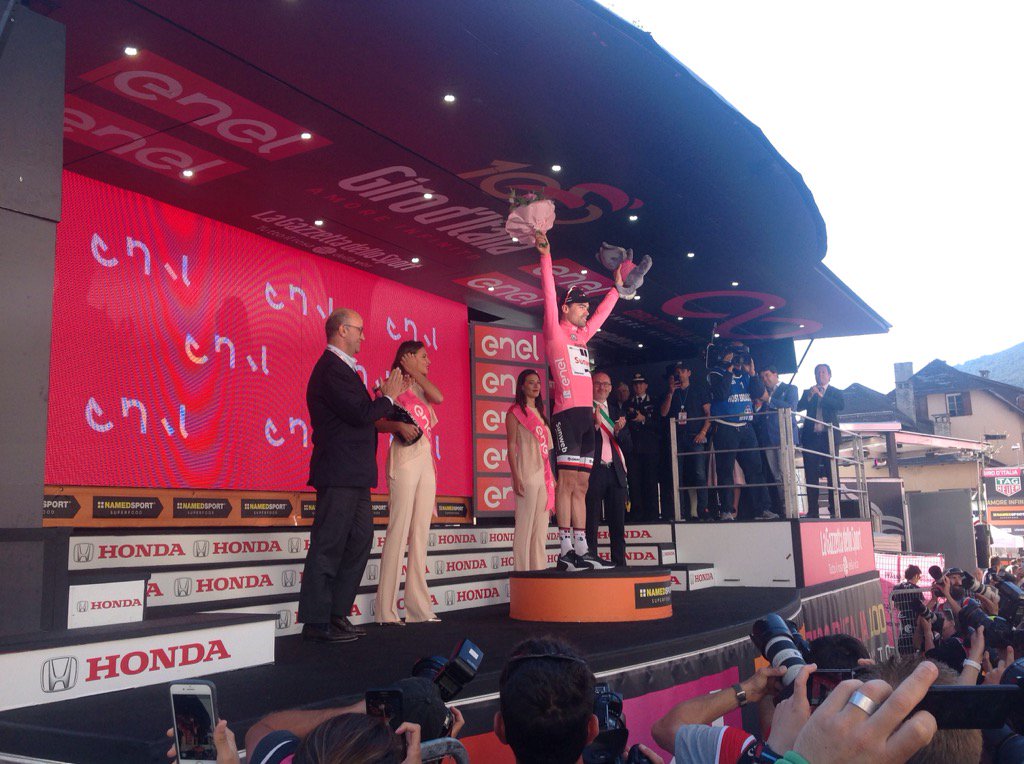 Upon reaching the base of the Passo di Pinei, the breakaway group was down to just six riders, as the chase had itself dwindled down to just 10 riders.

Rosa was the first rider to crack along the 15% gradients of the climb, leaving Landa, Dombrowski, Villella, Hirt, Berhane, and Van Garderen to forge ahead.

Back in the peloton, Ruben Plaza continued to lead the group down the descent, steadily reducing the gap of the leaders, before Landa and Van Garderen managed to jettison the others in their group.

Once again it was Movistar who moved to the front to lead the chase effort, with Andrey Amador and Winner Anacona doing most of the work, while Quintana was content to sit a little further back, locked on to the wheel of Dumoulin.

With seven kilometers remaining, Anacona rode clear of the chase. And, while the others hesitated, Quintana decided to bridge himself across to his team-mate.

Back up front, Van Garderen made an unsuccessful bid to drop Landa, while Quintana proceeded to ride clear of Anacona, who dropped back into the chase.

However, with 5.5 kilometers remaining, Quintana was caught, and almost immediately Nibali went on the attack, while Dumoulin was quick to respond, locking straight on to the Italian rider’s wheel.

Quintana had no choice but to respond, and was able to bridge his way across to his two main rivals, before Pozzovivo and Pinot began to push on over the top of the climb.

From there, the duo opened up a ten second gap over the pink jersey.

In the meantime, Zakarin decided to attack, followed by Kruiswijk and Mollema, while Dumoulin, Nibali, and Quintana chose to play a game of cat and mouse.

Meanwhile, Landa and Van Garderen went under the flamme rouge with a 20 second gap over Pinot and Pozzovivo (who had also picked up Hirt).

For a moment, it looked as though the leaders might be caught, while Landa decided to open up his sprint first.

That proved to be a mistake for the Spanish rider, as Van Garderen proceeded to make his way through the inside of the final corner and sprint clear of his rival.

Pinot, Pozzovivo, Zakarin Kruiswijk, and Mollema all followed in quick succession, but there was no such urgency for Dumoulin, Quintana, and Nibali, who rolled across the line just over a minute behind Van Garderen.