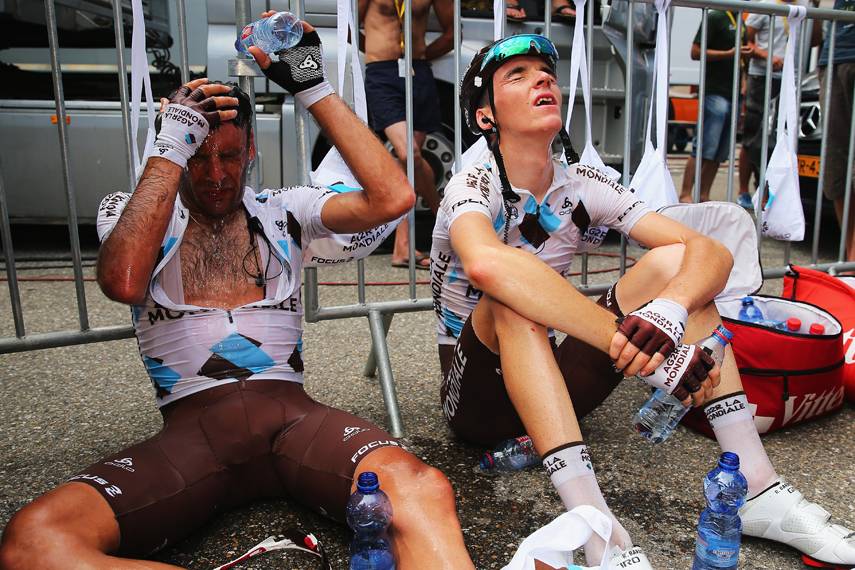 17 Jul 2015
By Gianni Pericolo - In LATEST ARTICLES, THE GREAT RACE

With temperatures soaring beyond 100 degrees in today’s stage of the Tour de France, water bottles have reached an all-time high of attrition.

At the end of today’s race, riders such as Matthias Brändle, Wilco Kelderman and Jérome Coppel, were observed in desperate acts to cool themselves off, like shoving ice down their bibshorts, holding cans of cold beverages against their head and downing liquids as though they were being rationed.

Indeed, everywhere you looked after the finish line of today’s stage in Rodez, riders were seen desperately trying to quench their thirst and find  ways to cool themselves down.

“There’s going to be a world shortage of bottles after this race, I reckon,” joked Cannondale-Garmin’s Dan Martin. “I don’t know how many I drank today. It was a lot.”

According to reports, Katusha’s soigneurs prepared no fewer than 200 water bottles for its seven riders today.

“I’d drink a bidon, go back to the team car 10 minutes later, drink another,” said IAM’s Martin Elmiger. “Maybe tomorrow I will cope better, but I was terrible today.” 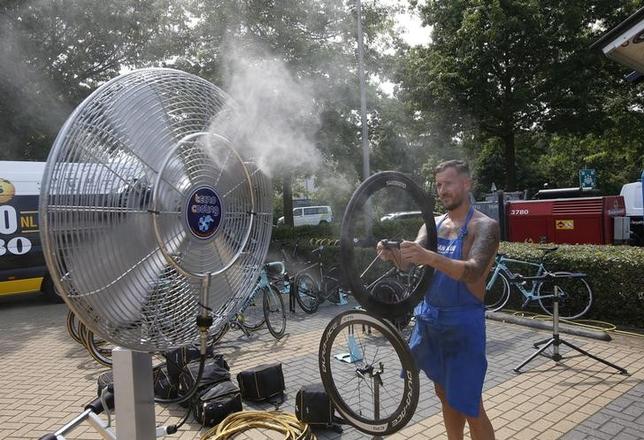 Giant-Alpecin’s riders were seen trying to cool down post-race under the team bus’s awning, with some riders opting to wear ice vests while warming up pre-race on a trainer.

“I was putting ice down my jersey all the time today,” said rider Roy Curvers. “But they melt within 10 kilometers! You throw water over yourself, you try to stay hydrated, but in this heat you cannot drink enough.”

Cannondale’s Nathan Haas was also in the day’s escape group that got caught in the closing kilometers, but despite being born in Brisbane and living in Girona (average July high of 90°) during the season, he found today’s stage especially tough.

“It’s very attritious,” he said. “It’s something you can’t describe, the feeling that when the heat gets so deep within you that it feels like it’s in your bones. It can happen before you realize and it can take a long time to cool down.”

According to the weather forecast, riders won’t expect to see a reprieve from the heat, until they reach the Champs Elysées – which has caused a good deal of concern for the teams.

“I think the heat is going to be a deciding factor in the race,” said Martin. “Looking at the forecast, it’s going to be hot until the last weekend – and that has a big impact on recovery.”

Curvers added: “The heat makes the race an extra per cent harder. How much harder I don’t know exactly – it’s just as s**t riding in the rain all day.”