Hundreds of Bike-Share Bikes Left in Piles in Chinese Cities 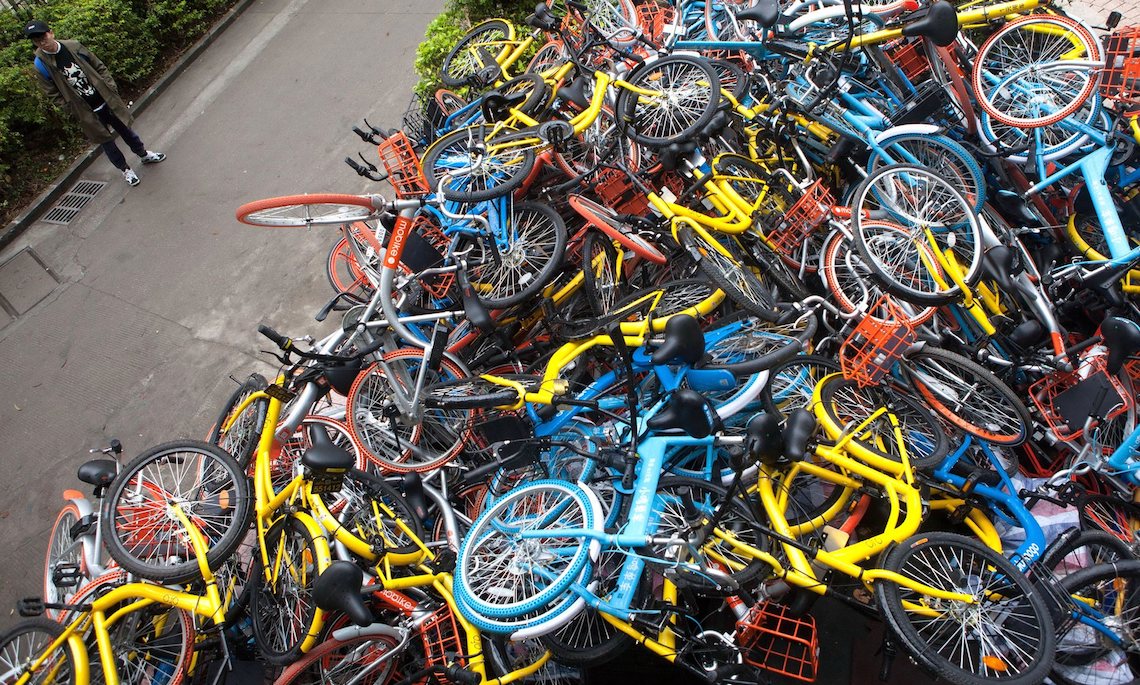 It has been billed as a hi-tech bike-sharing boom that entrepreneurs hope will make them rich while simultaneously transforming China’s traffic-clogged cities. But, occasionally, dreams can turn sour.

In the southern Chinese city of Shenzhen, more than 500 bicycles for hire have been found dumped in huge piles on the streets, according to reports.

Pictures showed jumbled stacks of vehicles nearly three metres high, with handlebars, baskets and other parts scattered on the ground.

City streets around the country have seen an explosion of the colourful bikes that users can rent on demand with a smartphone app and then park wherever they choose.

From Shanghai to Sichuan province, bike-sharing schemes are being rolled out in an effort to slash congestion and air pollution by putting a country once known as the “Kingdom of Bicycles” back on two wheels.

Companies such as Ofo and Mobike, with their rival fleets of vibrant yellow and fluorescent orange bikes, have been locked in a cut-throat battle for customers.

But problems have arisen when clients have abandoned their cycles.

“Some people these days just have really bad character,” a man named He, who lives near where the stacks appeared, told the media.

“When they’re done using [the bike] they just throw it away somewhere, because they’ve already paid.”

In the past few days he witnessed people demolishing the bikes before discarding them on the side of the road, he said.

Residents told the media that bikes had been piling up over the past week, either parked haphazardly by careless users or stacked by local security guards trying to clear narrow residential alleys and footpaths.

Zhuang Chuangyu, a representative at Shenzhen’s municipal people’s congress, said the city needed to step up regulation of the bike-sharing industry in order to improve traffic conditions and safety standards, especially since schoolchildren often used the bikes.

In the years following Mao Zedong’s 1949 communist takeover, bikes ruled supreme in China and the Flying Pigeon – the eastern equivalent of the Raleigh Roadster – became one of the country’s most recognisable symbols.

But two-wheeled travel began to go out of fashion as China became more open to the world, ushering in decades of economic growth and a high demand for cars.

Meanwhile, car use has rocketed. In 2010 China overtook the US to become the world’s largest car market, with 13.5m vehicles sold in just 12 months.