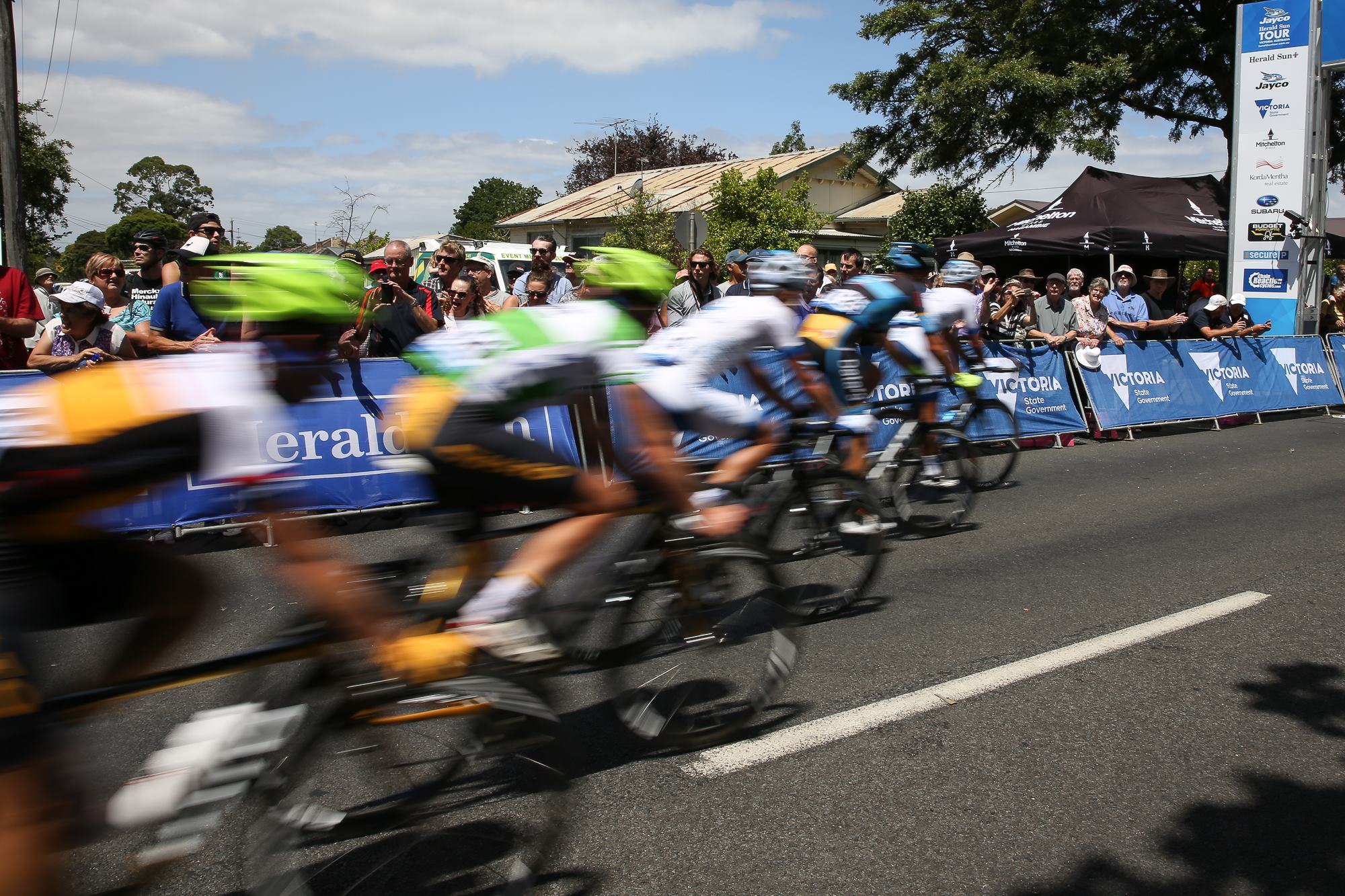 The peloton threw everything at Caleb Ewan (ORICA-GreenEDGE) on the road to Moe, but the plucky young sprinter survived to claim a convincing victory in Stage 2 of the 2016 Jayco Herald Sun Tour.

Ewan could not be jettisoned over several tough climbs on the 144.2km stage and the 21-year-old sprinted to the win by over a bike length from American Tanner Putt (UnitedHealthcare) and overall Tour leader, Peter Kennaugh (Team Sky).

The 21-year-old notched his ninth win of 2016 and paid tribute to the efforts of his teammates following his victory.

“It was much tougher than the usual sprint finishes that I’ve been used to this summer,” he said.

“On the final climb I knew [Jack] Bobridge (Trek-Segafredo) and (Peter) Kennaugh (Team Sky) were strong, they’ve proven that so I knew couldn’t let them get a gap over the top. I fought for dear life and was able to stay with them.

“The team rode awesome today, they kept me out of trouble and kept me near the front on all the climbs.

“It’s a massive confidence boost knowing that in the harder stages I can still be strong enough to be there and win the sprint.”

Kennaugh finished three seconds down on Ewan for the stage but extended his lead on teammate Chris Froome (who finished fourth) by another six seconds for a total of 13 seconds heading into Stage 3 on Saturday. A strong ride from former Jayco Herald Sun Tour runner-up and 2016 Australian champion Jack Bobridge saw him move into third overall at 31 seconds after he finished just behind Froome.

“It was always going to be hard to shake Caleb off and I thought I could catch him off guard but he stuck to my wheel,” said Kennaugh.

“In the end I just stayed on the front and rode in. I could see that I had dropped [Jack] Bobridge and I thought it was a good chance to get bonus seconds and also extend my lead.

“I’m quite excited for Sunday’s race to be honest hopefully we can just take it up on the climb and either me or Froome will be up for another stage win.”

Froome, while admitting the day didn’t quite go to plan for Team Sky, was pleased with the result, despite losing his King Of the Mountain jersey to Chris Harper (State of Matter / MAAP).

“I expected a big bunch sprint so, it was a bit more selective than that,” the two-time Tour de France winner said. “It was a good day out there, the guys did a great job controlling for us. Pete in third place again, we’re happy with that.

“I was a little bit tired after yesterday’s effort, but it was still a good day in the saddle – another good stage down,” he added. “It was beautiful scenery today out on the roads.”

Several attempts at breakaways were thwarted in the first 40kms of racing, including an attack by Bobridge which was enough to net him maximum points at the first intermediate sprint at Yarra Junction, just ahead of Avanti IsoWhey Sports’ Anthony Giacoppo and Pat Shaw.

It was only a move by Yuma Koishi (Nippo – Vini Fantini) and Harper, which was finally allowed up the road and the pair quickly opened up a five-minute advantage heading over the Cat. 3 KOM at Powelltown. That would be the biggest gap on the peloton that was dealt. Nearly 30km later heading up the Cat. 2 KOM at Noojee, known as Vespers, Harper was forced to go it alone as his breakaway companion struggled to keep the pace with their lead gradually slipping.

Back in the peloton, the KordaMentha Australian National Team handed responsibility over to Avanti IsoWhey Sports and their riders put the pressure on with a solid tempo their bid to shake Ewan and force a general classification selection to elevate their overall prospects.

“Avanti took it up on the main climb which was interesting – I wasn’t really sure why, maybe they were going for the King Of the Mountains points but, either way it made it exciting racing,” admitted Kennaugh. “It also made the stage really hard and I think that’s partly why it split in the crosswinds at the end because everyone was already racing on quite tired legs.”

By the third and final categorized climb of the day, Harper’s lead over the chase had been whittled to just over two minutes and the peloton had been splintered into two front chase groups, with Ewan, Bobridge, Froome and Kennaugh and a host of Avanti riders leading the way.

Team Sky led the chase, content to keep the trio at around a minute’s advantage to the 112km mark before ORICA-GreenEDGE too took up the challenge and at the start of the 15km finishing loop around Moe, just 20 seconds of clean road remained.

Christie took that as the cue to attack Bayly and Van Der Ploeg but was quickly reeled in and with under 10km to go, Sky and ORICA-GreenEDGE continued their epic arm-wrestle for stage honours, splitting a reduced field even further.

The final 5km of racing saw Ewan and teammate Jack Haig, Froome, Kennaugh, Putt and Bobridge go on the offensive and push for home. Kennaugh attempted a solo move on the sweeping bend leading to the finish line, but Ewan had the Brit’s measure.

“It was such a hard headwind, by the time I’d made my attack they’d all seen it because the wind was so strong but I managed to gain a bit of time on Bobridge which is never a bad thing,” explained Kennaugh.