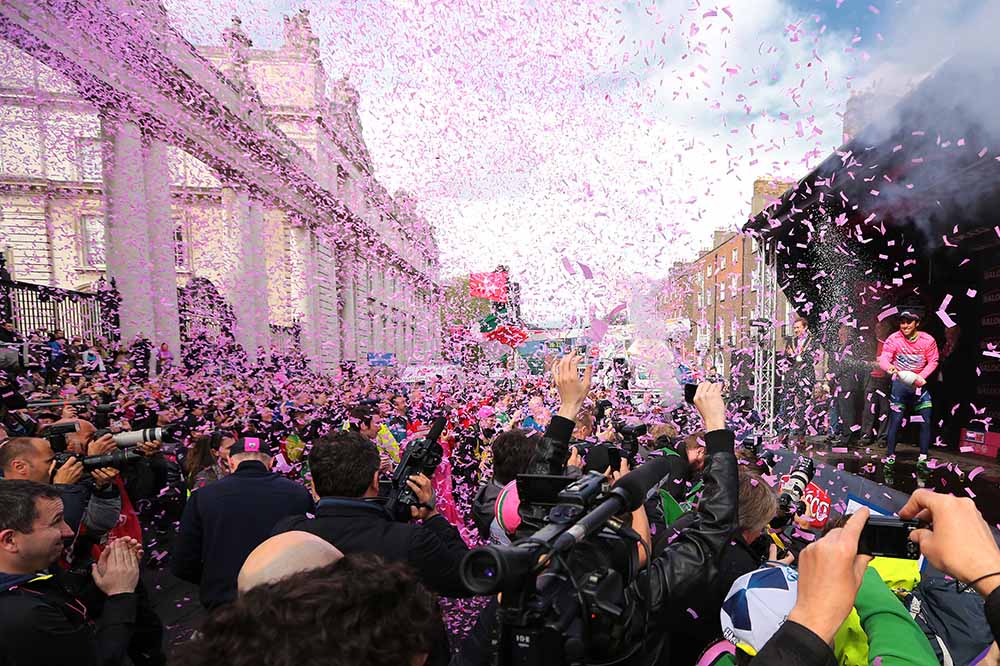 Organizers for the Giro d’Italia released this video today, showcasing three of this year’s four leader’s jerseys for 100th edition of the Italian Grand Tour.

The fourth jersey, the one that denotes the leader of the Sprint Classification – will be unveiled in the coming days, with a special surprise to celebrate this year’s historic edition of the Giro.

In keeping with tradition, organizers turned to Santini Maglificio to design and produce this year’s jerseys.

In addition, sponsors for this year’s jerseys were also announced.

“The Giro d’Italia tells more than 100 years of the history of our country. The effort of the athletes riding their bikes demonstrates the passion, the sacrifice and the team spirit needed to finish each stage and maybe win it too. Enel shares the same spirit as the 100th edition of the Giro becoming even closer to the people, showcasing its activities and learning where to improve to best address its clients needs. We will follow the race to help tell the story of the great change happening in the world of energy, in particular around electric mobility, energy efficiency, Smart Technologies and a new shared vision of the future of energy in our country,” said Carlo Tamburi, Enel’s Head of Country Italy.

“We are proud to sponsor the Giro d’Italia Maglia Azzurra of the King of the Mountain for the fifteenth year. The Maglia Azzurra is a symbol of the Italian culture,” said Ennio Doris, Banca Mediolanum Chairman. “Our choice to continue our sponsorship is motivated by the idea that to climb a mountain we go slower, as happens in times of economic crisis, but, at the same time, we pull out all of our strength to win. The final winner of the Giro d’Italia comes from the Mountains. Cycling is a sport that requires effort. Those who have tried to cycle uphill know that only those who have trained manage to reach the top of the Mountain. This hundredth edition of the Giro is a story of men and their passions and challenges, a great story loved by millions of fans.”

“This is our third year of sponsoring the Maglia Bianca,” said Ivan Odorizzi, Eurospin Italia Chairman, “and we are very pleased to participate in the Giro 100, such an important edition of the race. Despite being over 100 years old, the Giro d’Italia has never felt so young and vibrant. We like to think the same about Eurospin. We are only 24 years old, so we are legitimately entitled to wear the Maglia Bianca! In our 24 years we have pedalled a lot, so that today we have more than 1,000 retail points and we have presence in each and every province of our country, paying particular attention to local traditions. This year, next to each Giro stage, we will dedicate to the local gastronomic excellences a specific brand: ‘Giro tra i Sapori d’Italia’. It looked like the best way to celebrate Giro100!”

The 100th edition of the Giro d’Italia begins May 5 on the island of Sardinia with a trio of stages before a transfer to Sicily for two stages, the first of which is due to finish on the Mount Etna volcano.

The race concludes on May 28 with a 28 kilometer time trial in Milan.

Today, along with RCS Sport, we will unveil three of the four official jerseys for the 2017 Corsa Rosa which begins on May 5. Santini has been designing and making the prestigious Giro d’Italia jerseys since 1993: “This goes beyond a straightforward collaboration between ourselves and RCS Sport,” CEO Monica Santini is keen to stress, “because both our brand and that of the Giro d’Italia are two prestigous Made in Italy products and we feel it is important to continue this journey together, especially in the year it celebrates its 100th edition.”

Four jerseys for the Corsa Rosa leaders. The four official 2017 Giro d’Italia jerseys were entirely designed and manufactured in the Santini facility in Lallio. Made from high-tech SITIP Bodyfit and Rudy fabrics with the Bergamo company’s signature expertise, they represent the state-of-the-art in cycling clothing. The jerseys will also be donned by the stage race’s four top riders who, quite naturally, demand extremely comfortable, high-performance and technologically leading-edge kit.

First and foremost is, of course, the Maglia Rosa sponsored by Enel and worn by the Overall Leader. The jersey’s colour is a reference to the pink paper used for the Gazzetta dello Sport newspaper, the bulwark of Italian cycling journalism. The Overall Leader jersey is flanked by the blue Maglia Azzurra, sponsored by Mediolanum, donned by the Mountains Leader, and the Maglia Bianca, the Euro Spin-sponsored white jersey worn by the Best Young Rider. The fourth jersey is a new addition especially for the Centenary edition and will be unveiled at a later date. All the Santini jerseys have an exceptionally aerodynamic fit as well as delivering superb comfort, breathability (temperatures will be high on many of the stages) and performance as befits the apparel of professional cyclists at the top of their hugely demanding game.

Meticulous attention to detail is another signature and even extends to the graphics used on the jerseys. Santini’s designers have placed the Giro d’Italia script accompanied by a new Centenary logo featuring a swirling number 100 crafted into a stylised cyclist and the event’s AMORE INFINITO (INFINITE LOVE) slogan, on the collar. The logo also appears on the inside collar and for the occasion will be given a gilded finish. All the jerseys will sport gold details to mark the Centenary edition of the Corsa Rosa.