Lars Boom: From Cyclocross to Road Racing and Back 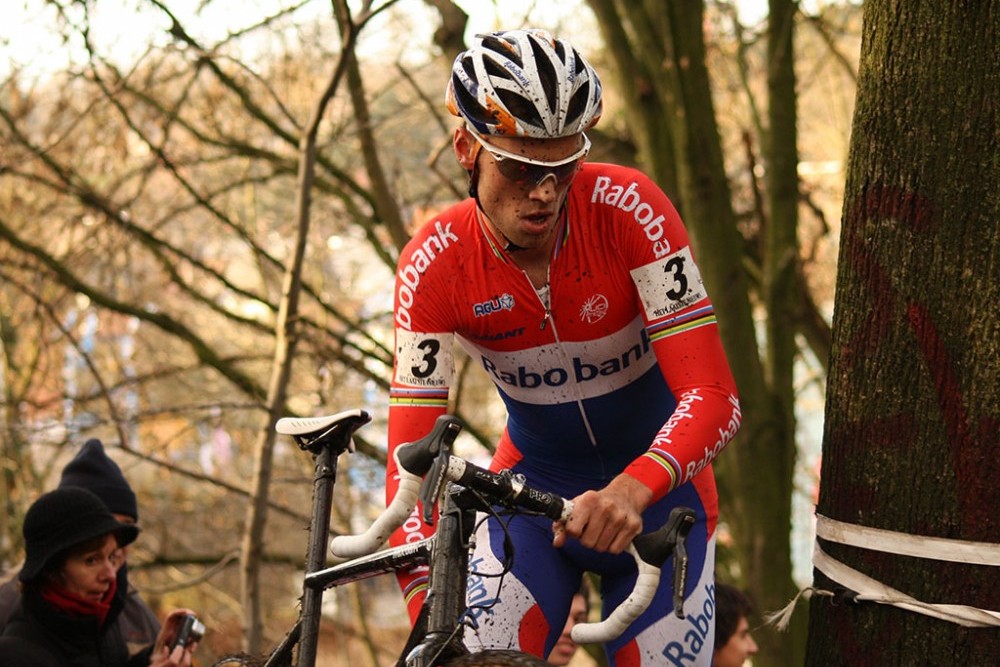 Few would dispute the fact that Wout van Aert (Belgium) and Mathieu Van der Poel (Netherlands) are the favorites for this year’s UCI Cyclocross World Championships title in the Elite Men category. The two young riders have dominated the 2016-2017 cyclocross season and they’re the two most recent UCI World Champions.

Other UCI World Champions from recent years like Zdenek Stybar (2010, 2011 & 2014), Sven Nys (2005 & 2013) and Niels Albert (2009 & 2012) will not be at the start line in Bieles, Luxembourg. Stybar rode a handful of cyclocross races this season but the Czech rider is now focusing on the upcoming road season. Belgians Nys and Albert have retired from competition.

The only other former UCI World Champion on the start line in Bieles will be 31-year-old Lars Boom (the Netherlands). Out of the cyclocross spotlight in recent years, he nevertheless aims for a top-10 result in Luxembourg.

The 2008 UCI Cyclocross World Champion (crowned in Treviso, Italy) switched focus from cyclocross to road in 2009, having left a massive mark on the cyclocross world. His first major cyclo-cross victory came in 2003 when he won the world title in the Men Junior category in Monopoli, Italy. Three years later, on New Year’s Day 2006, just two days after turning 20, he showed he had what it took to beat the big boys, claiming victory at the GP Sven Nys in Baal.

In 2007, Boom debuted in the Men Elite category at the Dutch National Championships… and won. For the next three seasons, he was a top favorite in nearly every race he started. In 2007, he left the Men Under-23 category by capturing the world title in Hooglede-Gits, Belgium, where he beat a certain Niels Albert. Meanwhile, Boom was also successful on the road as an Under-23 rider. Just before the start of the 2007-2008 cyclo-cross season, he won the time trial world title at the 2007 UCI Road World Championships in Stuttgart, Germany. He went on to win three rounds of the UCI Cyclocross World Cup – in Pijnacker, Liévin and Hoogerheide – before confirming his superiority in Treviso, where he took the UCI World Championships title ahead of Stybar and Nys. In doing so, he became the first rider to be crowned UCI Cyclocross World Champion in all three categories: Junior, Under-23 and Elite.

Boom also stepped up a level on the road, winning the 2008 National Championships in both the time trial and the road race. He continued rocking during the 2008-2009 cyclocross season with victories in the UCI World Cup rounds in Pijnacker and Nommay. Once again, Boom was top favorite for the UCI Cyclocross World Championships, this time on home soil in Hoogerheide. However, a strong performance from the Belgian team and an off-day for Boom (20th) ruined the party.

Shortly afterwards, Boom switched focus to the road and not without success. In 2009, he won the Tour of Belgium and a stage in the Vuelta a España. Over the following years, his excellent time trial skills led to wins in prologues, including at Paris-Nice, the Tour of Qatar and the Critérium du Dauphiné. He also won the Tour of Britain in 2011 and the Eneco Tour in 2012. Another notable victory was his epic rain-drenched win in a mini-edition of Paris-Roubaix at the 2014 edition of the Tour de France. While he would dearly love to score a big win in the Spring Classics, his best results to date are 4th in Paris-Roubaix and 6th in the Ronde van Vlaanderen, both in 2015.

Even after his switch to road racing, Boom made sporadic returns to the cyclocross fields, which saw him win six consecutive Dutch national cyclocross titles from 2007 to 2012. In 2010, Boom surprised by winning the UCI World Cup round in Heusden-Zolder, Belgium, despite a back-row start position. In 2013, Boom’s winning streak at the Dutch National Championships ended when he finished runner-up to young Lars van der Haar. He made a complete break from the cyclocross discipline for the next two years.

During the 2015-2016 cyclocross season, Boom made a surprise comeback at the UCI World Cup round in Heusden-Zolder. He struggled and narrowly managed to finish in the lead lap. He was hoping for better at the 2016 UCI Cyclocross World Championships on the same course one month later. However, he was unable to leave his mark and finished 14th, 2:37 behind winner Wout van Aert.

This year, Boom decided to kick off his cyclo-cross campaign earlier, saying he loved the discipline and hoped to regain punch over the winter. He began in low-key fashion with three C2 races in Spain where he followed up a 9th place with two 5th places. Nearly a month later, Boom was clearly faring much better than the year before during the Telenet UCI World Cup round in Heusden-Zolder. He featured near the front during the first half of the race, eventually finishing 11th. One week later, he claimed his first cyclocross podium in a very long time on a muddy course in Surhuisterveen: claiming 2nd place behind Corné van Kessel. At the Dutch National Championships a few days later, Boom struggled on the twisting, technical course and finished 8th.

Boom was hoping for a top-16 finish at the Telenet UCI Cyclocross World Cup round in Fiuggi, Italy, earlier this month in order to secure Dutch selection for Bieles. The slippery course and a crash decided differently and Boom abandoned the race. He then opted to skip last weekend’s final round of the series in Hoogerheide in favour of a team training camp in Spain. Boom could only hope that his former achievements and recent showings would earn him a spot in the Dutch team of six riders; that turned out to be the case. He stays in Spain until Wednesday, combining road with cyclocross training.

Van Aert and Van der Poel are out of his league in Luxembourg, Boom acknowledges. Behind the two top dogs, the experienced Dutch athlete feels there’s a spot for him in the top 10.