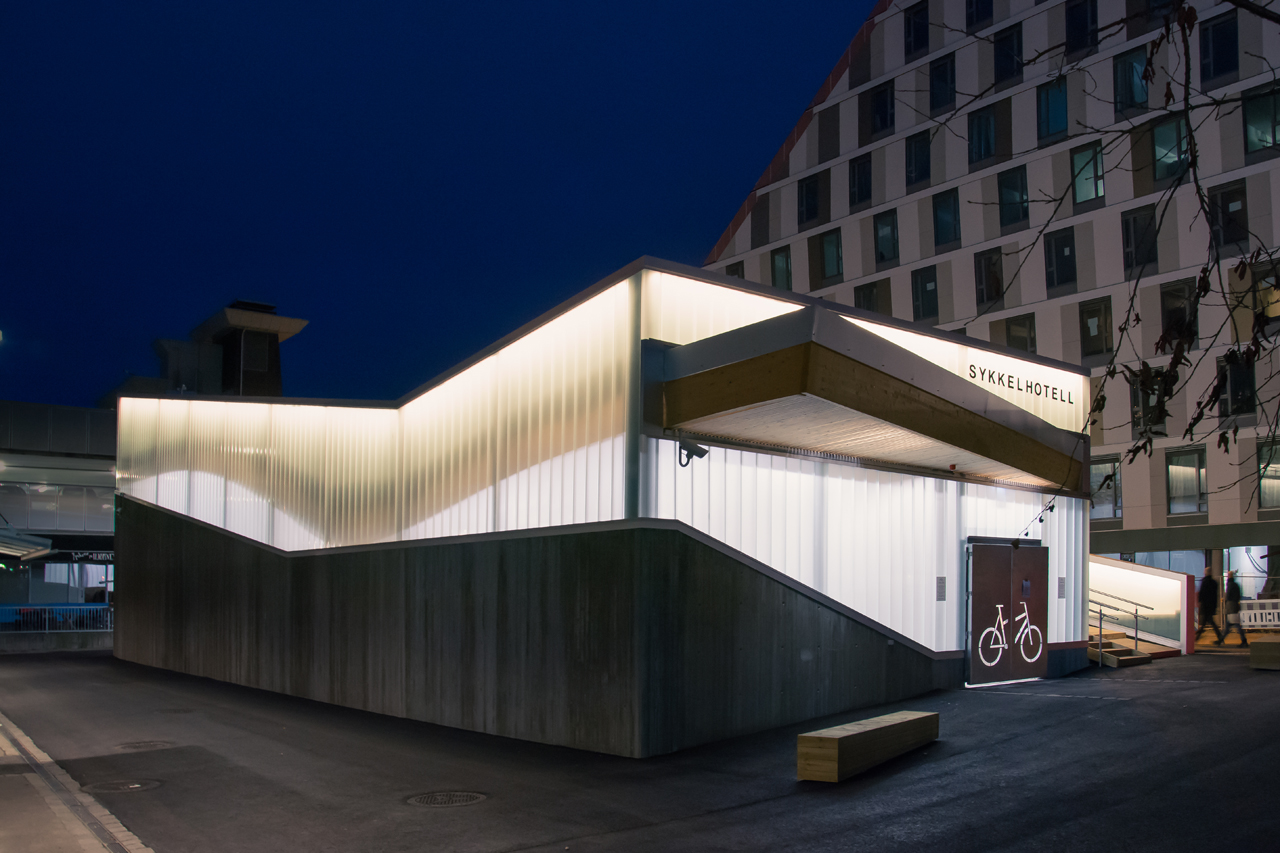 While some hotels tout the slogan, We’ll Keep the Light on for You, there’s one in Lillestrøm, Norway that will even accommodate your bike.

Indeed, the new Lillestrøm Bicycle Hotel, which is located adjacent to city’s main square and train station, will give your bike a cozy space to bunk while you’re off somewhere enjoying the city.

Commissioned by Norwegian National Railways as a public space, the hotel offers more than 5,000 square feet of bike storage space that is protected from the elements. The aim is to make cycling even easier for people commuting around the city, and bicycle hotels such as this one are popping up near railway stations throughout the bike-friendly nation.

The Lillestrøm Bicycle Hotel is a free-form wooden roof that rests on a boxed building covered in glass and a concrete base. The translucent façades allow natural light to filter through during the day, transforming the building into a glowing hub during the evening and providing a continuously changing visual experience between day and night.

The sloping wooden roof creates a dynamic single structure and provides an inviting public access to the top — where a furnished and vegetated rooftop offers a panoramic view towards the city. Together, the glassed box and roof create an intimate yet open public space.

The character of the building is influenced by its surroundings, with exposed and raw materials such as concrete, U-glass, steel, wood and green sedum.

In addition, concrete is used for internal floors and walls as well, exposing the roughness of the material, while the external façades are constructed using U-glass profiles, which are self-supporting and require no metal profiles.

Finally, wood is used to finish-off the surface of the roof, surrounding furniture and the main structure.

Thanks to the green design, the Lillestrøm Bicycle Hotel has incredibly low energy consumption. The green sedum on the roof absorbs rainwater to provide natural insulation from extreme heat and cold. In combination with the ventilated glass walls, the result is a structure that only requires a small amount of energy to illuminate the lights at night.

The Lillestrøm Bicycle Hotel officially opened its doors just last October, with the goal of providing cyclists and city dwellers with a unique hotel experience, while offering inspiration to other cities that are looking for ways to reduce greenhouse gasses and cut down on traffic.

Norway demonstrates an elegant solution for achieving this goal.