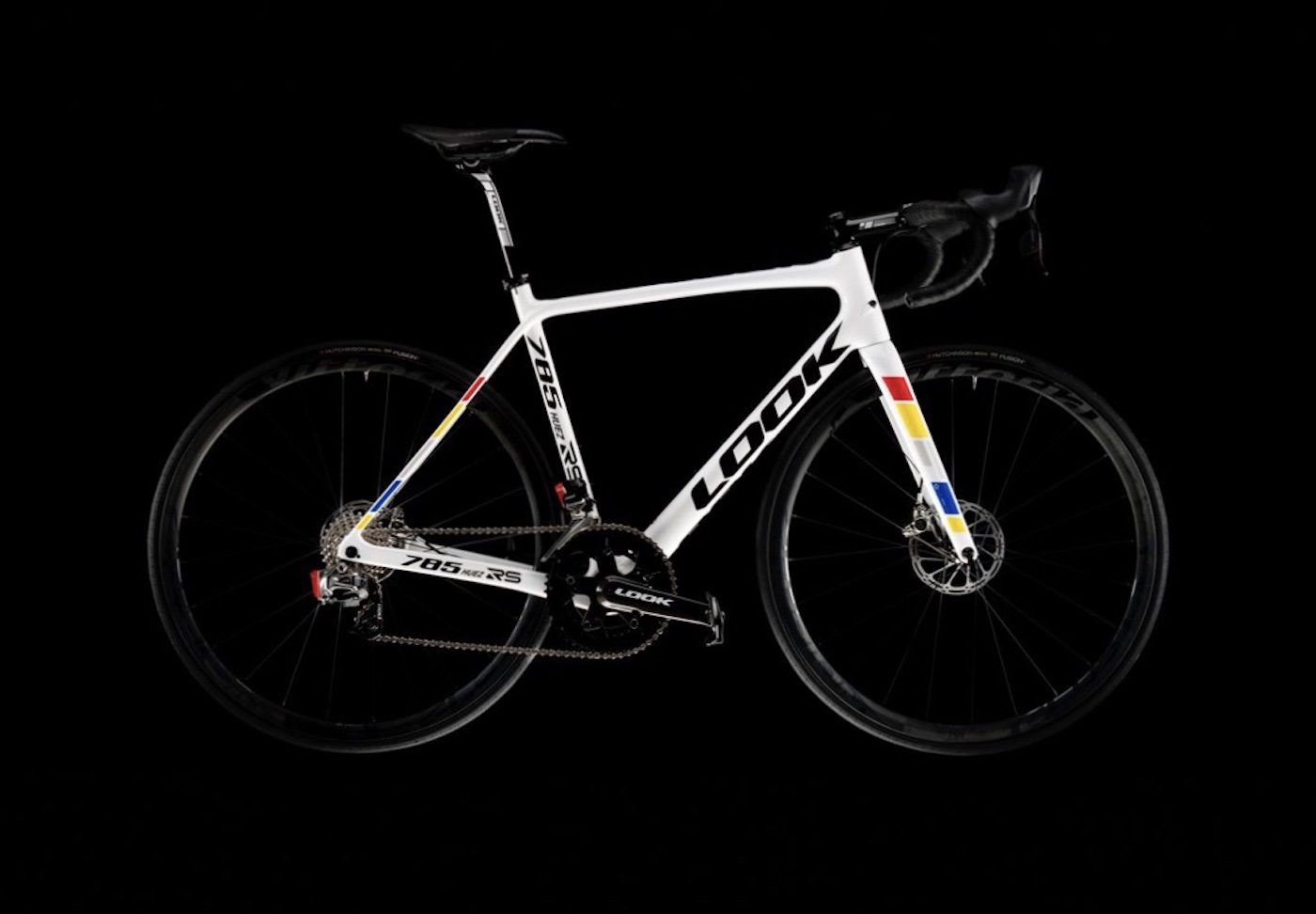 Just as the manual transmission has fallen by the wayside in favor of the automatic-sequential gearbox in the automotive world, like it or not, the caliper brake will all but disappear sometime soon as disc brakes continue to dominate the road bike segment – something that was clearly evidenced by the number of new disc brake equipped bikes unveiled during this week’s Eurobike show in Germany.

LOOK has added itself to the growing number of companies who have been keen to get onboard with the revolution by cladding its flagship 785 Huez RS with flat-mount, hydraulic disc brakes and Mavic’s thru-axle Speed-Release system.

Additionally, LOOK says the new 785 Huez RS Disc required a revised carbon lay-up process to account for the added “load” disc brakes impose under braking, which comprises no fewer than five different types of high modulus carbon in order to ensure optimal rigidity while achieving a feathery sub-800g for the frame, along with an equally impressive 280g for the fork.

Not surprisingly, the 785 Huez RS Disc also get’s more clearance, allowing for tires up to 28mm.

You can learn more about the new 785 Huez RS by visiting LOOK’s website here.

Equipped with FLAT MOUNT and SPEEDRELEASE, Technology, the new 785 HUEZ RS Disc enables you to perform safely on both slopes of the hill. Its stability, power and precision will assure an optimal security to help you keep your advantage.

The FLAT MOUNT disc brake standard allows direct attachment of the hydraulic calipers to the carbon of the fork and frame. Its main advantage, in addition to refining the design and profile, is to reduce the overall weight of the system.

To optimize the rigidity and to compensate for the significant forces during braking, the wheel axles used are 12 mm thru-axles. The 785 also uses one of the latest innovations available: the speed-release system. This axle system allows disassembly of the wheel twice as fast as with a traditional thru-axle. Indeed it is not necessary to remove it completely from the frame or fork to clear the wheel. A simple 5 mm release with an indexed setting and the wheel is removed while the axle remains in the hub. This feature is particularly useful in competition for quick and efficient wheel changes.

With over 30 years of carbon technology know-how, skill and expertise, LOOK engineers, in their manufacturing facility, ultra-precisely define the position and orientation of each of the thin layers of carbon used to create their tubes.

To create the 785 HUEZ RS, we began by studying and improving the shape of all of the tubes. Optimizing the shape requires defining the design that provides the maximum inertia for each tube, that is to say, to choose the optimal length, size and shape that produces the best stiffness-to-weight ratio.

We therefore, opted for a sleek and sophisticated design based on precise research, entirely focused upon the search for efficiency and performed by our engineers, to create an ultralight bicycle with the best possible characteristics. A tube sidewall thickness of 0.6 mm was ultimately chosen.

Once the optimal length, size and tube thickness have been determined, the next step is to establish the ideal carbon composition to achieve our objective, the creation of the best bicycle made for climbing. To accomplish this, the recipe is similar to that of gastronomic cuisine. To make the best dish, one needs ingredients of the highest quality. LOOK has therefore selected only superior carbon fibers, including the finest of the high modulus, to create the HUEZ 785 RS. We have chosen five different types of carbon, each one selected for its outstanding quality in its category.