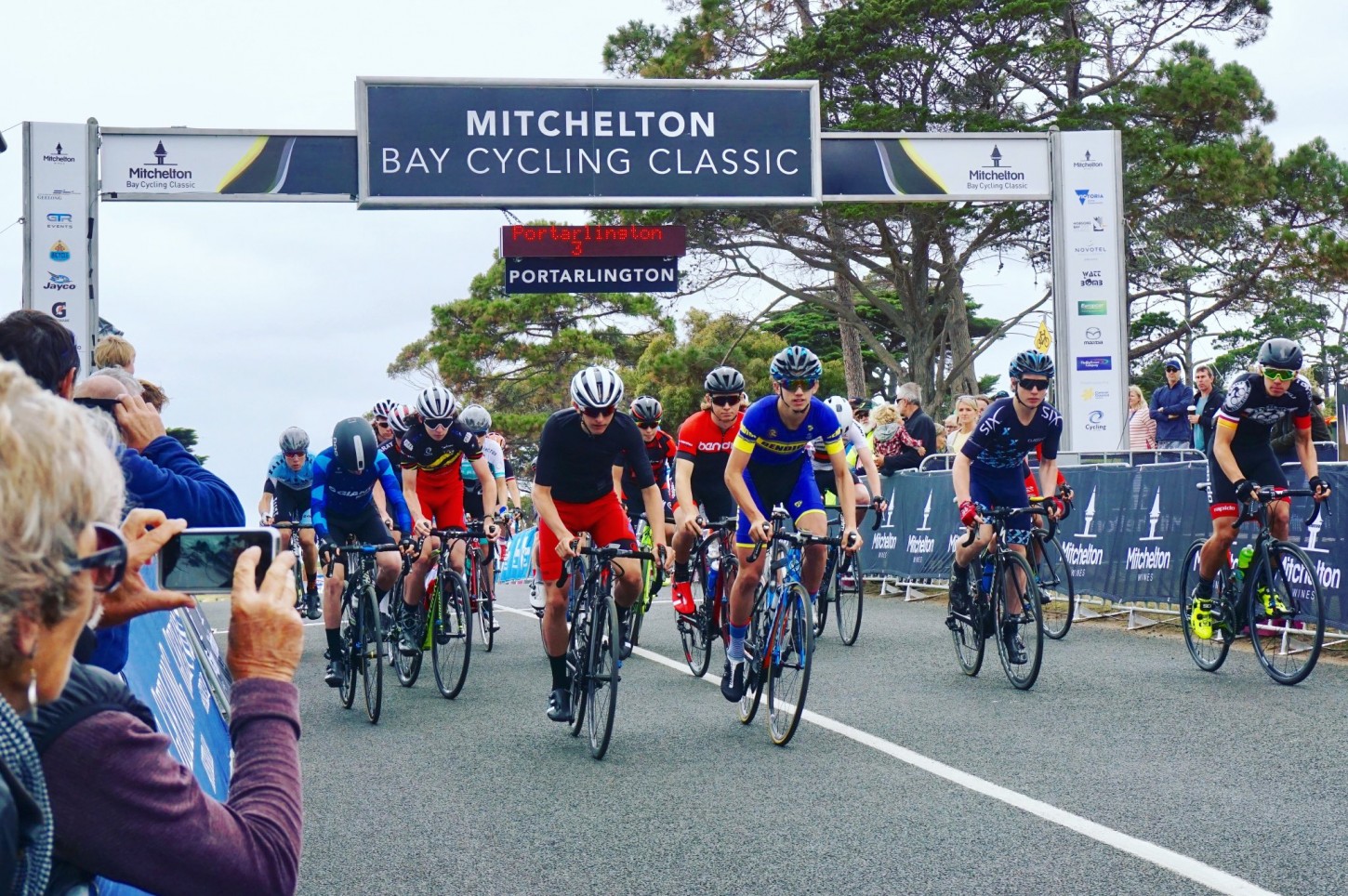 “I wanted to go to the line by myself,” Hepburn said. “I threw a couple attacks in but I couldn’t get rid of them. They were stock-standard attacks in the obvious moments, so I decided to attack through the start/finish line, which you don’t normally do here and try to catch Jesse off-guard. Luckily I got a gap and could keep going with it.”

“We can’t fault anyone yesterday,” Hepburn added. “We put ourselves into a situation to get a result there in the end, and one small moment like that can cost you the race. We’re here to get in some hard racing to prepare for the Nationals coming up this week. Every race we do here is another stepping stone to that.”

“There was an opportunity there for a few guys to go up the road be quite aggressive,” Hepburn noted. “I’m thankful to have the form and legs to go with it.”

“It went really hard on the climbs and the race split at a really tough point,” said stage one winner and race leader Ian Bibby. “I had a bit of luck yesterday, and it was quite nice to back that up today.”

Bouncing back from yesterday’s crash, Caleb Ewan (ORICA-Scott) went on the attack along with Robbie Hucker (VTWO Team) mid-way through today’s race.

However, lack of cohesion eventually forced both riders back into the fold of the peloton.

From there, Luke Durbridge (ORICA-Scott) initiated an attack of his own, only to see his efforts countered by Hepburn’s winning move of the day, taking Bibby, Kerrison and Matt Gibson (Condor) along with him.

Hepburn would later attack again during the penultimate lap, escaping both his breakaway companions and any would-be chasers.

“My form is pretty good,” Hepburn said. “I’ve had a good summer training. Until you’ve had a few race days, it’s hard to really gauge where the form is at, but I’ve felt good the last couple days. I’ll have another crack tomorrow.”

“Everyone seems to fall off around me, and I somehow seem to avoid it,” joked Bibby. “Jesse was unlucky crashing. When it happened, I sat up and waited for Matt. We got our heads down together.”

Bibby and Gibson evaded the peloton by a mere two seconds with Bibby getting the upper-hand in the two-up sprint to solidify his overall lead. Bobby will head to Williamstown with 22 points over Gibson, who has 16 points, and Hepburn with 12 points.

“You have your time off and go on holiday and then come back and you’re out in the snow and rain in England,” said Bibby. “It’s hard to imagine that here. You never know how you’re going to go – dropped on the first lap or there to contend at the end. It’s nice to show that hard work in the rain and show has paid off.”

Meanwhile, Kerrison crashed out of the chase with two laps remaining.

In the women’s race, ORICA-Scott celebrated another victory, as Amanda Spratt soloed to victory ahead of her teammates Jenelle Crooks and Annemie Van Vleuten.

“I’ve done 12 or 13 Bay Crits now,” said Spratt. “This course is my favorite. I’ve been trying to win every year here and never have – and finally! I’ve only ever won one other one, in Williamstown, and every year I came here and say: ‘This is the year for Portarlington’ and it’s just never happened. I’m really happy.”

Meanwhile, yesterday’s stage winner, Valentina Scandolara (Alé Cycling) finished in sixth place at 1:40 down on Spratt. However, the Italian rider managed to retain her grip on the overall race lead.

The Australian team split the peloton during the opening minutes of today’s race, putting all five riders of its riders in the lead breakaway group that would ultimately claim all three spots on the podium.

“Yesterday we made a few mistakes,” said Spratt. “We didn’t use the numbers as best we could. Today we really wanted to make amends for that.”

“Basically everyone on the team could have gotten away on the circuit,” Spratt explained. “The main aim was to create a situation where there was a number of us on the front, and we could play to our numbers a bit more. We had the strongest and fittest team for the course.”

“We chose to drive that for a few laps even though everyone else was sitting on to get that gap consolidated,” Spratt added. “Then we could attack from there.”

Spratt was the first rider to attack during the opening lap, quickly gaining almost a 30 second advantage over the chase, while she continued to increase her gap with each subsequent lap.

“The first three or four laps, I drove it really hard to make sure I got the gap,” said Spratt. “I could see the gap was going out quite quickly and I had information from [sport director] Gene [Bates] on the other side of the course, giving me the gap and telling me it was time to settle in. After a while, I could see the back of the peloton and relax a little bit as well.”

In the meantime, Scandolara found herself isolated without any teammates during the early split.

“This lap suits me a lot, but I didn’t have the numbers,” said Scandolara. “My team suffered a little bit.

“When Amanda attacked, it was fine for me,” added Scandolara. “She’s not the fastest in ORICA. I’m like: ‘If she wins, maybe I can still manage it.’ It was ok for me because in that moment, they stopped attacking to let Amanda go.”

Scandolara says she’s still hopeful she can win the series.

“I’m confident that my team will be there tomorrow again to try to control the race,” said Scandolara. “Hopefully I will be there to do a good sprint in the end and keep the jersey.”

“Tomorrow will be hard,” she added. “I’m not denying that. I will keep fighting, and I will get dropped before I stop trying.”