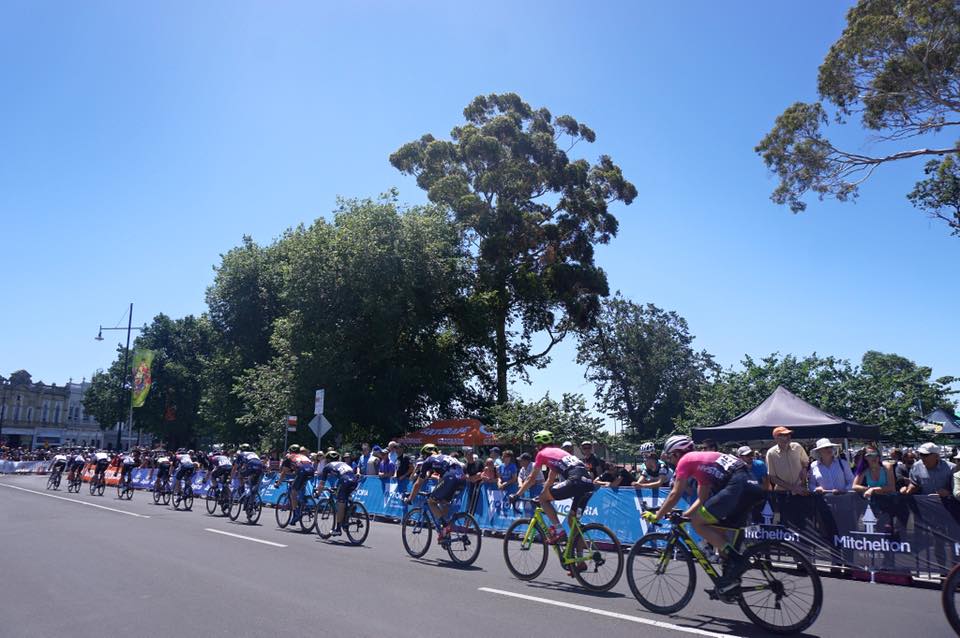 Ewan found himself locked in battle with JLT Condor’s Brenton Jones during the closing few hundred meters, ultimately jettisoning his rival during the final run-in to the finish.

“I think my success here has been down to committing pretty early,” Ewan said. “I start my sprint more than 300 meter out. I don’t know why it still catches people out because I’ve done it the last few years. As long as I keep doing that and getting to that corner first, I’m pretty positive.”

Having won the series on three previous occasions, Ewan was aiming for a fourth title, but a crash during stage one derailed his prospects.

“It would have been nice to win the series, but at the end of the day, this is a small stepping stone going into bigger races in the new year, so I’m not all that disappointed,” said Ewan. “Yesterday I had a bit of a dig and got away in the breakaway and felt really good. Today I won the sprint. I feel like I have all my bases covered going into Nationals.”

Meanwhile, the overall victory went to stage one winner, Ian Bibby (JLT Condor), signaling the first British winner of the Mitchelton Bay Cycling Classic, and only the second non-Australian to win the men’s race.

“It’s fantastic,” said Bibby. “To start the year off like this has been really, really good. I’m really happy. If you told me this would happen last week, I would have laughed.”

From there, the duo remained out front until the final 5 laps, where the peloton reined in the two escapees under the auspices of ORICA-Scott.

ORICA-Scott’s Damien Howson led for the next two laps, before swinging off to allow Mitch Docker to take up the pace, while Ewan sat calmly in their slipstream.

“Obviously coming into the last crit here, without a win yet, put a lot of pressure on this one, especially going into the national crit,” said Ewan. “It always helps a sprinter to have that confidence going into a big race. I’m super happy with how the team rode today. They were perfect.”

Ewan attacked during the final two corners, with only Jones able to follow his move.

“I knew Jones was on my wheel coming into the second to last corner,” said Ewan. “I knew I wanted to go pretty early. It’s hard to come back from that corner if you get stuffed up a little bit. I backed myself to go early and it paid off.”

In the women’s race, Jessica Allen (ORICA-Scott) claimed the final stage victory, after attacking her breakaway companions during the last two laps in Williamstown to take the win.

“I felt that I was the strongest in the breakaway, so I was very patient, which is not one of my strengths,” Allen said. “I thought: ‘With two laps to go, I’m just going to give it everything.’ And that’s what I did.”

“I needed to make more points than ORICA to win the overall jersey,” said Scandolara, who started the final stage with a two-point advantage over Portarlington winner Amanda Spratt (ORICA-Scott). “That was my target for today. If the bunch came together, of course, I also would have gone for the win, but the breakaway was perfect because my teammate was in it, sitting on.”

The day’s breakaway got underway during mid-point in today’s race, catching Annemiek van Vleuten (ORICA-Scott) who had been alone out front.

From there, Allen, Skerritt and Bechtel proceeded to build up a 30-second gap over the peloton.

“We were only two points behind GC, but we thought for us to get the stage win would be more in our favor,” said Allen. “If Spratty happened to get up the road without Vale, that would have worked great for us, but we wanted to be aggressive right from the start, and that’s what we did.”

With five laps remaining, the Novotel Geelong / Japan team attempted to shut down the move. However, Alé blocked their chase efforts, and the gap held steady around the half-minute mark.

Heading into the final lap, Allen put in a surge during a slight rise on the back half of the course, to quickly open up an eight-second advantage over her rivals.

“I wasn’t in good position on Sunday, and I was with two sprinters,” said Allen. “I wasn’t confident, and I didn’t back myself, which I learned to do today. I put myself in the break and said I could win this. I was a bit more patient and we used our numbers a lot better.”

Back in the peloton, Scandolara cross the finish almost half a minute later, but it was enough for the Italian rider to secure the overall race title.

“I had one of the best sprinters in the world leading me out, Chloe Hosking,” said Scandolara. “It was an easy job for me today, well – less difficult.”

“Last year I slipped to third [from second] on the last stage, but I was going for the stage wins because ORICA was all over the place,” Scandolara added. “I never really went for the series. This year winning the first stage, I wanted to.”