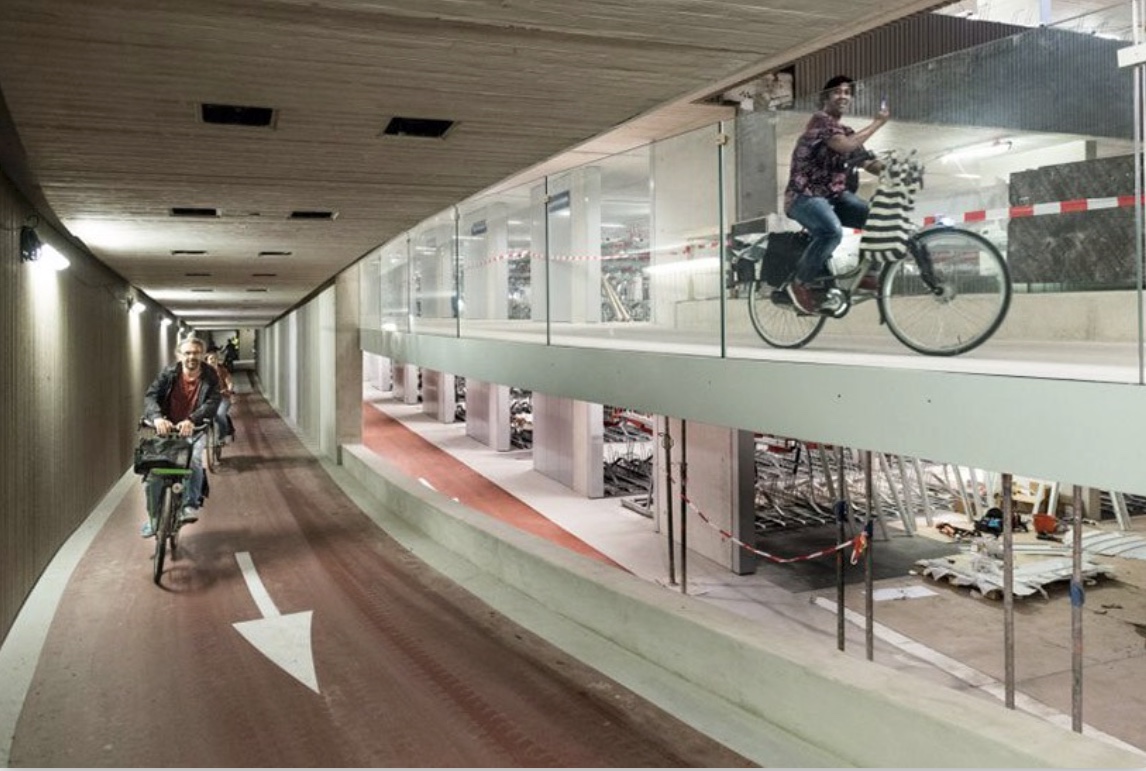 While major cities around the globe are working hard toward increasing mobility and decreasing pollution, there’s no better place in world than the Netherlands where this goal is being vigorously pursued, a country where bikes are sacred and at the center of virtually every municipal transportation initiative.

In the rapidly growing city of Utrecht, there are no fewer than 100,00 cyclists who rely upon their two-wheeled conveyances to get them to and from work, school, university and public transportation each day.

With the aim of being the most bike-friendly city in the world, Utrecht has just opened the world’s largest bike parking garage, a 17,100 square meter space that store up 6,000 bikes, with the goal of increasing storage to accommodate an additional 6,500 by the end of next year.

Located under Utrecht’s central station, the 17,100 sq meter space will soon knock the current title-holder, the Kasai underground station in Tokyo, off its perch.

Yet, despite the love affair the Dutch have with bikes, planning officials in the Netherlands are being accused of not doing enough. Critics say, the goal of creating 12,500 parking places simply isn’t enough based on the city’s increase in bike transportation.

For instance, statistics show that cycling is up 3% in just the last five years, with city-dwellers relying on their bikes as the main form of transportation for journeys under 5 miles (8 kilometers).

“To quote John Lennon, ‘Life is what happens to you while you are busy making other plans”, said Martijn van Es, spokesman for the Dutch cycling organization Fietsersbond. “By the time the politicians have made their decisions, and by the time things are built, there are more people cycling.”

The boom in cycling is most stark in urban areas. Since 2005, the number of bicycles has increased by almost 11%; in Rotterdam, cycling has increased by 20% in the last 10 years; The Hague reported 10% more cyclists in 2010 than 2006. Utrecht is the busiest of them all: 40% of those who arrive at the Netherlands’ biggest rail hub do so on two wheels.

Tatjana Stenfert, project manager at Utrecht station’s square, says the new garage, which fully opens later this month, will help make lives easier. It will be free to cyclists for the first 24 hours, and cost €1.25 (£1.13) a day thereafter.

“In Utrecht there are a lot of people coming to the station on bicycle and it was a mess, bikes being left everywhere, so this was needed,” Stenfert said. But she can’t fault Fietsersbond’s analysis. “We will have 12,500 places by the end of 2018. But then we will have to do some research and find more places for the bikes. It never stops. I look around and everyone is trying hard to find spaces – trying hard and fast.”