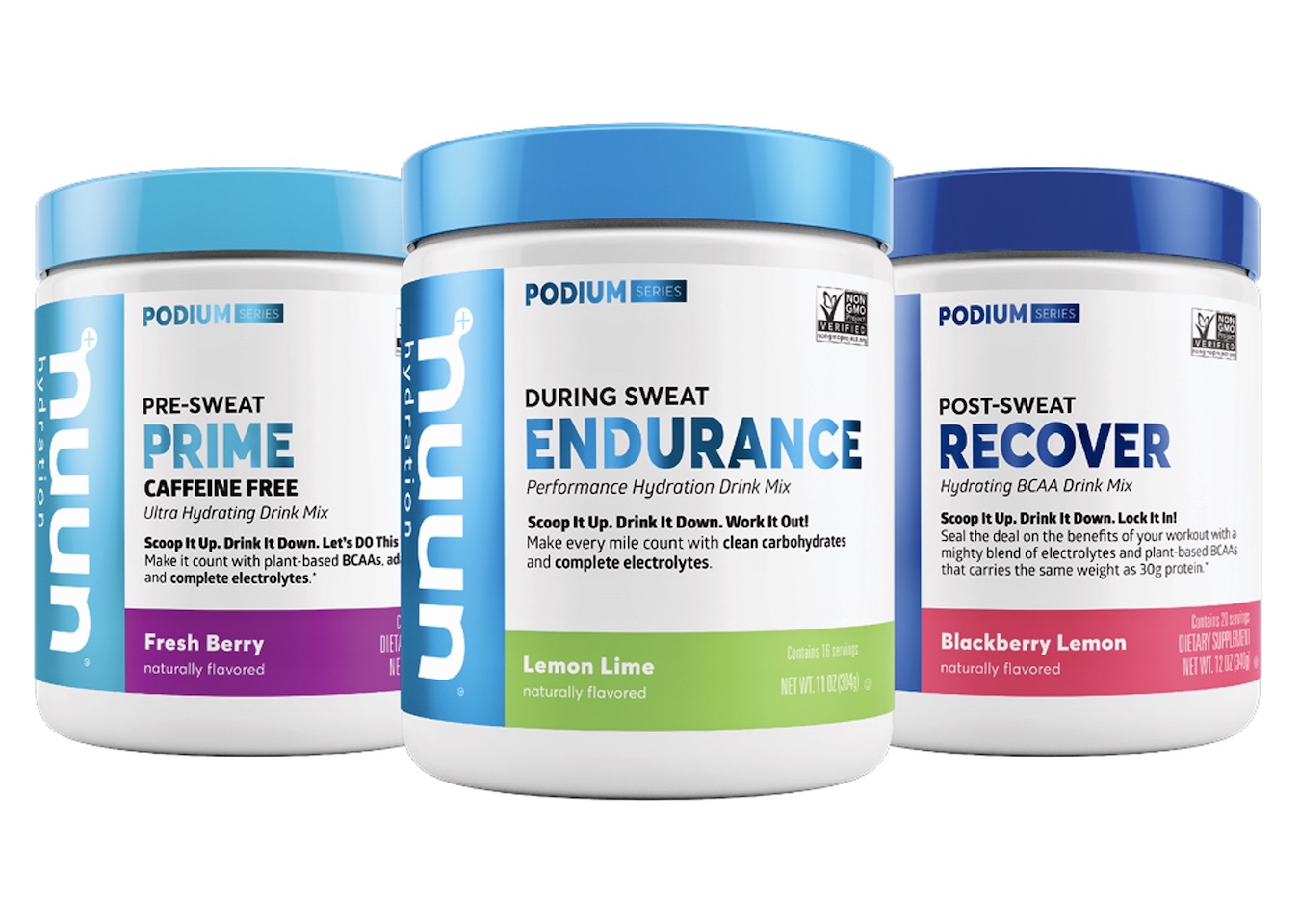 Nuun has introduced its latest plant-based hydration product called The Podium Series, which is designed specifically for intense training blocks that includes BCAAs, Adaptogens and L-Glutamine.

The Podium Series consists of three formulas: Prime ($34.99), Endurance ($20) and Recover ($34.99). Each is intended to meet the specific physiological needs of an athlete either before, during, or after workouts.

With BCAAs, carbohydrates, adaptogens, and L-Glutamine, The Podium Series is the first set of Nuun products to emphasize more than hydration. While Nuun’s other products are in tablet form that effervesce when in water, the Podium Series is in powder form and available in single-serve pouches or multiple-serving canisters.

It should be noted that while most BCAAs (Branch Chain Amino Acids) found in fitness supplements are made from the fur, feathers, and hooves of animals, Nuun’s BCAAs are not made from animal products or biproducts. This means that The Podium Series formulas, like all Nuun products, are 100% vegan friendly. For athletes struggling to find BCAA fitness supplements that meet their ethical and physical demands in a consumer landscape of limited ingredient source transparency, Nuun’s radical candor is a welcome change.

“Athletes searching for the most effective nutrition and hydration products for training will recognize many of the ingredients in The Podium Series as recent headline makers in sports science. BCAAs, like those found in both Nuun Prime and Nuun Recover, have been gaining traction in the athletic supplement landscape since the late 2000s owing to their positive effects on muscle energy and repair. Adaptogens like Panax Ginseng found in Nuun Prime have been linked to stress reduction and increased focus. Even familiar ingredients like caffeine (available in certain flavors of Nuun Prime and Nuun Endurance) have their place in athletic hydration,” says Nuun.

Of the three formulas, two are available for the first time on May 18. Endurance, the second in the three-step system, was first introduced in 2019. The product became the official on-course hydration for the L.A. Marathon. It was the success of Endurance that prompted Nuun to expand offerings and create The Podium Series.

The new Prime and Recover represent nearly a year of continuous research by the internal product development team, led by Vishal Patel with help from exercise physiologist and nutrition scientist Stacy Sims.

Of the new formulas, Patel says, “Nuun is excited to expand our portfolio beyond hydration and introduce a multi-functional, full-workout supplement suite. Our goal with The Podium Series was to create an optimally balanced system that extended beyond hydration and aided in both performance and recovery for athletes pursuing ambitious training goals.”

The Podium Series is available now at nuunlife.com, Whole Foods, REI Co-op, and bike and run specialty stores around the country. While the three products are designed to be consumed in succession, each can be purchased individually.