Porsche and Cannondale Head Out on a Midwest Safari 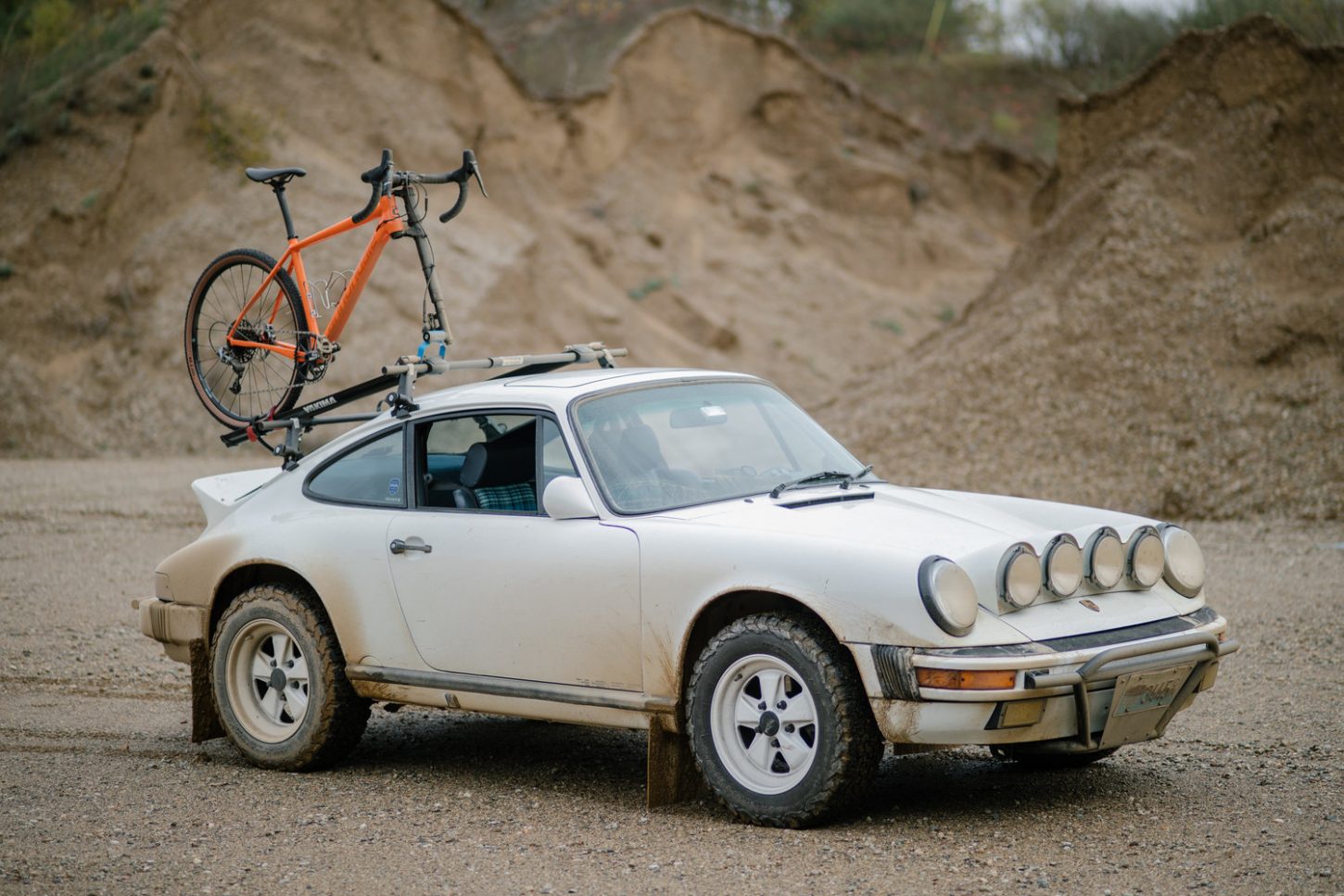 It’s quiet. Calm. Still. Bird song carries through the leaves. A tree falls in the forest. The Michigan gravel roads sit empty under overcast skies. An engine, off in the distance, cuts through the tranquility. The crunch of gravel under all-terrain tires. The throaty roar of an air-cooled flat-six echos, purrs. The car drifts round the bend, slightly askew, then rights itself and rips down the lane. Allan Thom passes by at the wheel, his aluminum spectacles shining. Window down. Doppler of sound. A dust cloud in his wake. The birds grow quiet. Reverent. The leaves quiver. The forest is still. Calm. Quiet.

Nearly a half-century ago, Allan Thom sat in the passenger seat. Ten years old. His father at the wheel, driving the North Dakota backroads Dad knew like the weathered back of his hand. The dust. The sound. The speed. It all quickened young Allan’s heart, then settled into his bones. The call of the gravel. The thrill of the dirt.

Thom the elder was a mechanic. Thom the younger became a mechanic. Allan Thom dreamed of being a rally driver, lusting after those Group B sports cars like every other red-blooded car nut in the ‘80s. He went to a rally school and he raced an ice-racing series in Minnesota, but he didn’t end up pursuing rally all the way to the main stage. He ran his shop, worked on race cars and raced as an amateur with the Sports Car Club of America (SCCA). A decade later, he settled down a bit. He married, had his first son and left his shop to work for a small — at the time — car -mat operation named Weathertech. “The racing thing was not easy to do anymore,” he said, referencing the growing demands on his free time. “But riding a bike was.”

“I kind of got away from cars, and now, in the last five or six years I got back into cars,” Thom said. During the two decades in between, Thom helped Weathertech expand their product line, move manufacturing to America, and grow from 30 employees to 1,200. Given his competitive spirit, he liked market competition as well. He worked his way up and became president of the company seven years ago; in that role he met a Weathertech driver named Leh Keen — a Porsche fanboy from Georgia. Keen and Thom got to talking German cars, rallying, dirt. Keen mentioned a project he’d started — modifying ‘80s Porsche 911s to be off-road ready. He was creating the Safari 911. “When the concept of the Safari 911 came out, I was like, ‘That’s exactly the thing I want,'” Thom said.

Thom signed up for Keen’s next car. “He’s the perfect Safari owner,” Keen said. “He uses his car a lot. He goes out and gets it muddy. And he enjoys it.” Keen kept Safari number one for himself. Thom owns Safari number two.

“I drive it everywhere, even in the winter,” Thom, who lives in the Chicago suburbs, said. “I don’t care. I’ll drive it to the city, because if someone bumps into it, backs into it; I’m not going to lose any sleep.” More frequently, though, Thom finds himself on the gravel backroads he loves. He drives that raised, big-tire 911 out to ride his big-tire bicycle. “The car and the bike are metaphors for each other,” Thom offered. And they are — they are both expertly modified machines that come alive when the pavement ends.

It’s hard to tell what Thom loves more: car or bike. They’re equal and complementary passions. Riding unlocks his competitive side. Driving unlocks his love of air-cooled, rear-engine machines. Both fuel his appetite for adventure.

“The Safari 911 is a perfectly suited, road-legal car, yet when you get it in it’s right element, you can be — to a certain degree — a race car driver,” Thom said. He waxed eloquent on the unique characteristics of a Porsche drive — even more pronounced in the Safari 911. “How does it drive? Well, those common Porsche attributes of understeer at the entrance of the corner and oversteer at the exit of the corner are still there. They’re just comically exaggerated. You’re laughing as you’re doing it.”

He’s also laughing once he hops on the bike and takes off on the rolling undulations near the Yankee Springs Recreation Area. Past the birds. Past the leaves. Past the rippling water on the ponds and lakes, stirred up by his zephyr of fast-moving air. He reaches the trailhead. He hops the low stone barrier and forges on, down the narrow path, racing away.