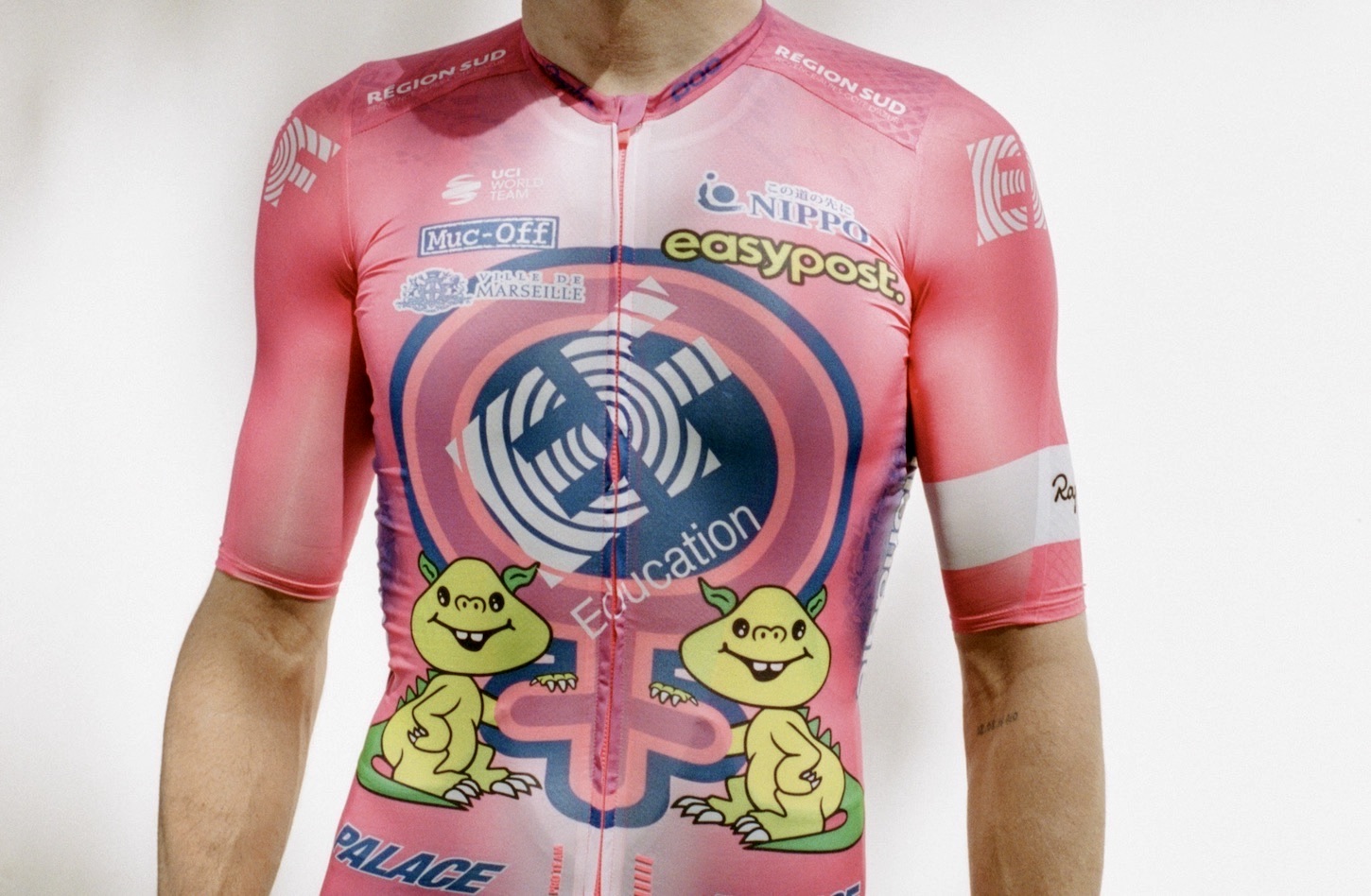 Rapha and Palace are celebrating the return of Tour de France Femmes with a collection of special edition kits, which will be donned by the EF Education-TIBCO-SVB  and EF Education-EasyPost teams.

“This year, the party doesn’t end in Paris when the men sprint onto the Champs-Élysées. For the first  time since the ‘80s, women will also get to race on cycling’s biggest stage at the Tour de France  Femmes. It’s a seminal moment for the sport, the fans and the riders, one that makes this race more  than just another Tour de France. Now that everyone is invited, the summer is set for a Tour de  Force,” says Rapha.

In addition, to the kits, both teams will see their fleet of Cannondale bikes, POC helmets and Crocs overhauled with a special edition livery, while team partners WHOOP and Wahoo have joined in as well, creating their own designs inspired by  the kit.

“I’m just thrilled with the kit that Rapha and Palace have designed to celebrate the return of the  women’s Tour de France. Women’s cycling has been growing steadily over the past couple of decades, but the  return of the Tour de France will accelerate this growth and further our search for equality,” said Linda  Jackson, the founder and owner of the EF Education-TIBCO-SVB team. “It’s a true honor to have the  EF Education-EasyPost men’s team racing their Tour de France in a jersey that celebrates women’s cycling.  It’s been a very long road to get to this point, and all of us, the riders, staff and management, realize the  significance of this jersey and will be proud to wear it.”

“The changeout is our way of celebrating women in sport and the Tour de France Femmes. It’s wild, it’s bold,  and it’s an exciting time for the cycling world and long overdue. It’s an honor for our team to race in this kit in  advance of the women’s Tour de France. Both races will be incredible, and we’ll fight to keep this kit and its  celebratory message at the front of the race this July,” said Jonathan Vaughters, the CEO of the EF  Education-EasyPost team.

The change out extends to the full range of team bikes from Cannondale to celebrate the return of  women to Le Tour. Every element of the frame desig|n of the SystemSix, SuperSix EVO and  SuperSlice is bold and intentional to seamlessly combine with the Rapha + Palace team kit that both  the men’s and women’s teams will don at the Tour. Unique touches extend beyond the obvious  elements of the design; each SuperSlice incorporates easter eggs for each ride to match their  personality and riding style.

Off the bike, there is a range of special edition casual wear from Rapha + Palace, which will be worn  by the teams at the Tour. The details of the off-bike collection will be revealed soon.

Both Rapha + Palace collections will be available through Rapha online, in select Rapha Clubhouses  and through Palace online and in store. The Cannondale SuperSix EVO frameset will be available  through rapha.cc, palaceskateboards.com and cannondale.com.

All of the Rapha + Palace items will be sold in very limited numbers and to give everyone the best  chance of accessing the collection there will be three drops at localized times in the UK, EU, Canada  and the USA and the Asia-Pacific region.

A select range of Rapha + Palace on-bike items will be made available exclusively to the Rapha  Cycling Club members who were active on or before the 28th of June or have renewed a previously  lapsed membership by the day preceding the commercial launch, the date of which will be  announced soon.