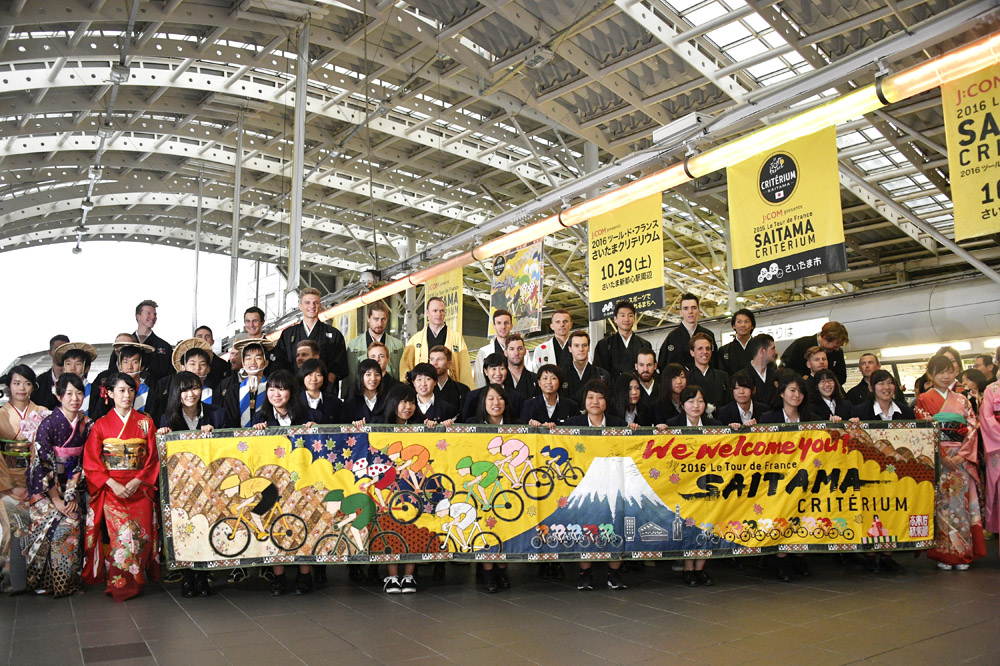 On the eve of the fourth Tour de France Saitama Criterium, it was all about media duties and cultural discovery for the Tour riders. An immense honour was accorded to Chris Froome, dressed in a kimono fit for an Emperor for a pretend wedding ceremony…

A TASTE OF THE TOUR FOR KUBOKI

Japan is still waiting for its fifth representative at the Tour de France, following Kisso Kawamuro (1926-27), Daisuke Imanaka (1996), Fumiyuki Beppu (2009) and Yukiya Arashiro (2009-16). He could well be found in the Saitama peloton, and his name might be Kazushige Kuboki. It’s very much his medium-term goal; for the time being he’s riding for Italian team Nippo-Vini Fantini, which is developing a Japanese training and scouting outfit. Japanese national champion in 2015, he split his 2016 between the road and the track so he could ride in the Rio Olympics, finishing 14th in the omnium. And he’s ending his season on a high note, mixing it with the likes of Froome, Sagan, Bardet and Kittel. “It’s an honour to be in the same peloton as them, the biggest names in the sport,” explains the Bologna-based rider. “My dream is to do the Tour, but it’s great to get a little snapshot, and in my home country too.” In the meantime, it would be logical for the Giro d’Italia to be his debut grand tour: “I want to do everything to earn my spot, and won’t be riding on the track next year. But there are five Japanese riders in the team, fighting for one place! Whatever happens, I’ll be putting my career on hold in 2020 for the Tokyo Games.”

A KIMONO MORE PRESTIGIOUS THAN THE YELLOW JERSEY!

The cultural programme put together for the Tour riders in Saitama began with a visit to the changing rooms to dress according to tradition in carefully selected kimonos. With most of them clad in black, they took part in a short procession through central Saitama to the Super Arena, where part of tomorrow’s race will unfold. A pretend imperial marriage ceremony was staged featuring the biggest names in the peloton… and some very rare kimonos. Romain Bardet, Marcel Kittel, Adam Yates, Rafal Majka and Peter Sagan wore kimonos usually reserved for ministers, while Chris Froome had the unprecedented privilege of celebrating the ritual in a Noshi, a kimono pattern that only the Emperor of Japan can wear. Although dressed in a prestigious outfit, the Yellow Jersey admitted beforehand that he “felt a real pressure… not even Obama got to wear a kimono like this!” Good things come to those who wait, and Froome was also accompanied by actress Aya Murata as his partner for the day! The solemn atmosphere lightened considerably when the riders entered the “kitchen”. This time they cooked Mochi, a cake made from rice dough served on New Year’s Day. Traditionally, the dough has to be pounded for two hours using a huge mallet to obtain the sticky, glue-like consistency characteristic of this festive dish. The riders were spared such a long workout, but did not miss out on tasting it. “I’ve never eaten anything like it in my life,” said Marcel Kittel. “But it’s actually lovely.”

J-Sports viewers tune in during July to follow the stages of the Tour de France, broadcast by the sports channel since 1998. They’re also in the habit of immersing themselves fully with Nuit du Tour, a show broadcast since 2006 after the route presentation. The birth of the Saitama Criterium in 2013 allowed the show to take on a new dimension, with the participation of the leading riders. The four winners of the distinctive jerseys were invited yesterday to talk about their plans for next season, and for the Criterium. Finally, a more relaxed section was devoted to less-than-serious quizzes… and a caricature competition. Their task for the day: to sketch a portrait of Bernard Hinault, in attendance in Saitama for his last duties as Tour ambassador.