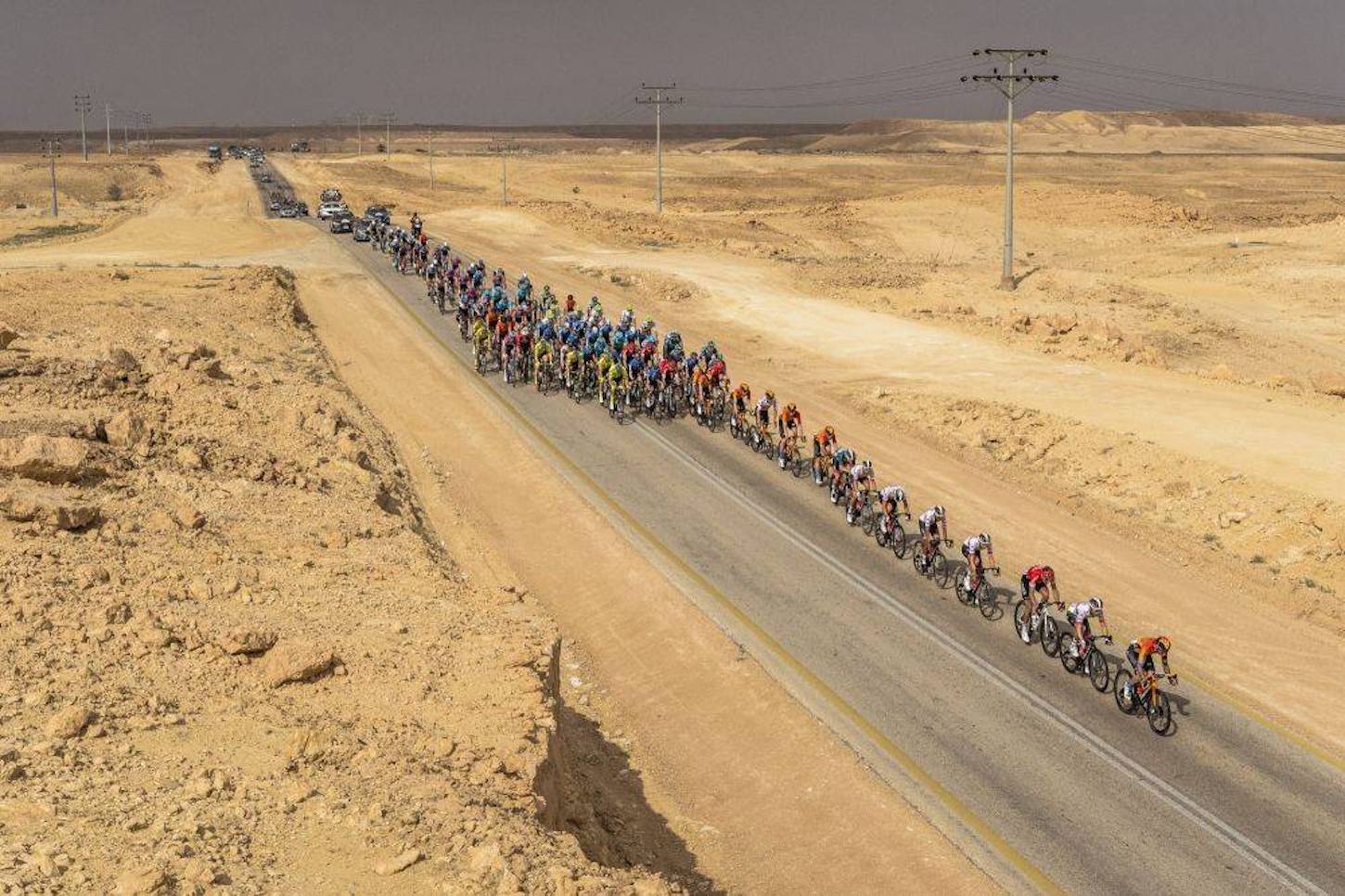 After a breathtaking day highlighting some of the beauty of Saudi Arabia, Rui Costa claimed the first “windy” stage of the inaugural Saudi Tour. The Portuguese made the best of the final uphill kilometer to conquer his first victory of the season beating Heinrich Haussler and Nacer Bouhanni to the line in Jaww. The former road World Champion becomes the first leader of the 5-day event and will be proudly carrying the green jersey on tomorrow’s stage.

The inaugural Saudi Tour took off under a perfectly blue sky and a bright sunshine from the Saudi Arabian Olympic Committee. On the day’s menu: 173kms of racing all the way to Jaww, south-west of the nation’s capital Riyadh. Perfect conditions and an entertaining wind for the 123 riders registered for this brand-new 5-day event.

It only took a few kilometers for six men to break away: Guerrero (Burgos-BH), Bassett (Rally-Cycling), Batmunkh (TSG Cycling Team), De Rooij, Holler (both Bike AID) and Moors (Ribble Weldtite Pro Cycling). Not too concerned by this group, the main bunch let the gap increase. The escapees could indeed enjoy a 4’50” advantage at km 25 and a maximum 7’ at km 55.

From there, several teams including Arkea-Samsic and Bahrain-McLaren started chasing and the gap dropped. As the bunch entered the feeding zone, the front men only had a 1’45” lead.  Making the best of a change of direction and strong enough wind, the Bahrain-McLaren team powered to the front and managed to break the peloton into several groups. 17 riders including Cavendish (Bahrain-McLaren), Rui Costa (UAE Team Emirates) Gasparotto (NTT Pro Cycling) and Slagter (B&B Hotels – Vital Concept) broke away leaving the likes of Terpstra (Total Direct Energie) and Bouhanni (Arkéa-Samsic) stranded behind. They eventually caught the escapees at km 101. After a fantastic battle between the big guns of the race, things settled down and the dropped groups reconvened again.

At the Most Aggressive Rider sprint (km 126), Paaschens (Wallonie Bruxelles) conquered the most points ahead of Soupe (Total Direct Energie) and Bassett. With 20kms to go, four men managed to take off: Haussler (Bahrain-McLaren), De Backer (B&B Hotels – Vital Concept), Siskevicius (Nippo Delko Provence) and Kron (Riwal Readynez Cycling Team). Five kilometres later it was looking good for the breakaway riders enjoying a 30” advantage. They still had a 15” lead with 5kms remaining.

But in the final kilometre just after going through Jaww, the front men saw the pack move closer and closer. They were eventually caught with under 500m to go. Making the best of the finishing climb, Rui Costa flew to victory. The Portuguese from the UAE Team Emirates who hadn’t won a race since 2017 during the Abu Dhabi Tour starts his season in style. His first race day of the season is a glorious one as he beats Haussler and Bouhanni to the line.

The 2013 World Champion conquers the overall leader’s Green jersey and will start day 2 of the race with a 1” lead over Haussler and 6” over Bouhanni. Meanwhile Haussler takes command of the Most Aggressive Rider classification while Andreas Kron will be wearing the best young rider’s White Jersey.

Just a day after crashing hard during the opening stage of the Saudi Tour, Niccoló Bonifazio hit back in style. The Italian powered to the line in impressive style to claim his first win of the season in Al Bujairi. In a final bunched sprint the Total Direct Energie rider beat Phil Bauhaus (Bahrain-McLaren) and Nacer Bouhanni (Arkéa-Samsic) to the line. Finishing in the pack, Rui Costa keeps the overall leader’s Green jersey with three days to go.

After yesterday’s opening stage, the 118 remaining riders of the inaugural Saudi Tour gathered by the splendid Sadus Castle for the start of stage 2. The riders took off at 11:22 for a 187-km stage heading back south-east towards Riyadh.

As soon as the first kilometer, four riders broke away: Van Melsen (Circus-Wanty Gobert), Fuentes (Burgos-BH), Holler (Bike AID) and Nicolau (Caja Rural Seguros RGA). Their advantage increased very rapidly from 1’40” at km 5 to 3’15” at km 30. The first two intermediate active sprints were claimed by Fuentes while the pack reached km 75 with a 3’45” time deficit. That was just after Mark Cavendish (Bahrain-McLaren) recovered from a 10-man crash and moved back into the peloton.

The gap carried on growing and reached 5’25” at the third sprint where Fuentes again conquered the most points, comforting his lead in the Most Active Rider classification. But from then on teams UAE Emirates, Arkea-Samsic and Bahrain-McLaren moved to the front of the pack and started chasing. With 25kms to go, the gap had dropped to 1’10”. The front four were eventually caught with 12 kms remaining.

The pack remained intact all the way to the final straight situated in Al Bujairi close to where heavy-weight boxing World champion Anthony Joshua won his rematch against Andy Ruiz last December and where the Dakar rally bivouac settled for its rest day in January. On the slightly uphill straight, Niccolo Bonifazio (Total Direct Energie) remained in the wheel of Haussler before powering to the line. The Italian competing in his first race of the season eventually beat Phil Bauhaus (Bahrain-McLaren) and Nacer Bouhanni (Arkea Samsic) to the line.

After finishing in yesterday’s stage, Phil Bauhaus got his revenge in Al Bujairi conquering an impressive bunched sprint. The German made the best of the final uphill straight suited to his power and a perfect lead out by his Bahrain-McLaren team mates Heinrich Haussler and Mark Cavendish. The 25-year-old eventually beat Reinardt Janse Van Rensburg (NTT Pro Cycling Team) and Youcef Reguigui (TSG) to the line. Despite being extremely active all along the day’s stage, previous race leader Rui Costa loses his green jersey to Bauhaus who now had a 3” lead with two stages to go.

Stage 3 of the Saudi Tour was to be a rather short one starting from the King Saud University and heading south-west before returning to Al Bujairi after 119kms of racing. Short but extremely entertaining! The 116 remaining riders took off just before 1 o’clock for an intense battle. Indeed despite several breakaway attempts, it took over 20 kilometres for a breakaway to build a big enough gap over the pack. At km 22, Suter (Wallonie-Bruxelles), Ellsay (Rally Cycling), Batmunkh (TSG), Holler and Kangangi (Bike AID) powered away. Their lead reached 1’45 at km 30 and then 2’ at the first intermediate active sprint won by Suter ahead of Batmunkh and Holler.

However, on the long uphill portion heading to the second intermediate sprint, team UAE Emirates took command of the pack and chased hard, launching overall leader Rui Costa who took off on a counter-attack. The Green jersey made it first to the sprint with a 5” advantage over the first chasing group. The Portuguese rider was eventually caught at km 85 by the pack that had brought back together again.

The third active sprint was then claimed by Nicolau (Caja Rural-Seguros RGA) ahead of Madrazo (Burgos-BH) and Hailemicheal (Nippo Delko Provence) with the last two insisting and managing to pull away from the pack. With 25kms to go the Spaniard and the Ethiopian could enjoy a slim 20” advantage. They were to be caught at km 100.

Again as the road started rising, Rui Costa powered away on his own. He went on to claim the bonus sprint and the all-important 3” going with it. After having a 20” lead with 7kms to go, the overall leader was caught by the hungry bunch before the final 5-km mark. The peloton remained bunched all the way to the final straight, the same one as yesterday’s stage 2. Nicely led out by his teammates Heinrich Haussler and Mark Cavendish, Phil Bauhaus managed the perfect sprint, beating Reinardt Janse Van Rensburg (NTT Pro Cycling Team) and Youcef Reguigui. A winner last year of the Copa Bernocchi but also of stages on the Abu Dhabi Tour and Criterium du Dauphiné in previous seasons, Bauhaus wins his first race of 2020.

Thanks to the bonus seconds of his stage win, the German takes command of the general classification and will be wearing the green jersey on tomorrow’s fourth stage. He also leads the points classification while Kron (Riwal Readynez Cycling Team) remains best young rider and Fuentes (Burgos-BH) the most active rider of the event.