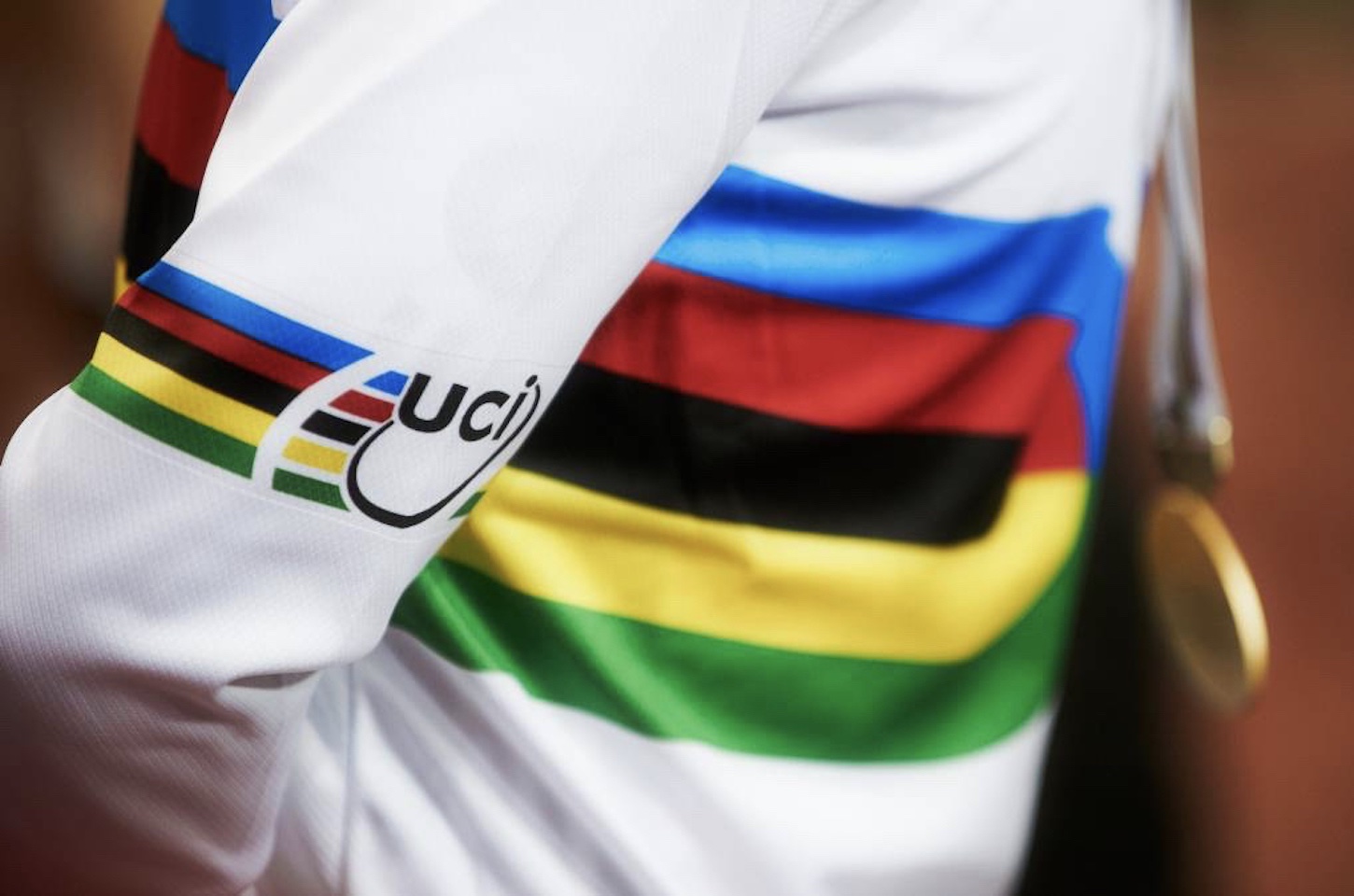 Scotland has been awarded the host of the revamped UCI Cycling World Championships for 2023.

The Championships, which will take place at venues in Glasgow and across Scotland over two weeks in August 2023, has been awarded in recognition of the country’s proven expertise in delivering world-class and ground-breaking events.

The vision of UCI President, David Lappartient, this historic and innovative event will bring together 13 existing individual World Championships cycling disciplines into one mega event for the first time. The Championships will bring together thousands of the world’s best cyclists all vying to win the iconic rainbow jersey, in what will become the world’s biggest cycling event, broadcast to a global audience.

Speaking at today’s announcement at the Sir Chris Hoy Velodrome, UCI President David Lappartient, said, “I am delighted that the UCI has today awarded the 2023 UCI Cycling World Championships to Glasgow and Scotland. The creation and the implementation of this event was one of the commitments I had made during my campaign for UCI presidency and I am proud to have fulfilled it. I wish to thank EventScotland, Glasgow Life, UK Sport and British Cycling for their enthusiastic involvement in the very first edition of this historic event, which will uniquely showcase our sport and its different disciplines on an international stage. Glasgow and Scotland has a great deal of experience in the organisation of major sporting events, notably multi-sports, such as the first edition of the European Sports Championships that it organised in 2018. I am convinced that the UCI Cycling World Championships will be a great success, and I look forward enormously to preparing them with our Scottish partners.”

Both Glasgow and Scotland’s records are self-evident when it comes to delivering mega events, having hosted some of the world’s biggest sporting events in recent years; including the 2014 Commonwealth Games, the 2014 Ryder Cup and Glasgow 2018 European Championships, with the 2019 Solheim Cup and UEFA EURO 2020 to come over the next 18 months.

It is this unrivaled events experience, which also includes such cycling events as the annual Mercedes Benz UCI Mountain Bike World Cup at Fort William, the 2007 UCI Mountain Bike World Championships, OVO Energy Tour of Britain and the Tissot UCI Track Cycling World Cup in recent years, which made Scotland the UCI’s destination to host the maiden edition of what is destined to become every four years an outstanding fixture of the international cycling competition calendar.

Combined with Glasgow’s existing investment in world-class cycling infrastructure such as the Sir Chris Hoy Velodrome and the Glasgow BMX Centre in Knightswood, this ensures that Scotland will be able to host this event without having to build any new venues.

The opportunity to be the host of the revamped  the UCI Cycling World Championships will also provide a visible focus to support the acceleration of a range of local and national policy initiatives across the areas of health, transport, sport and tourism, and which would see Scotland aspire to become one of Europe’s top cycling nations.

Reacting to the news, Cabinet Secretary for Tourism, Culture and External Affairs Fiona Hyslop said, “as the first ever host of this event, Scotland will cement its position as a leader and innovator in the planning and delivery of major sporting events. It builds upon the successes of the 2014 Commonwealth Games, the 2014 Ryder Cup and last year’s European Championships.

“Our overall aim is for Scotland to become one of Europe’s top cycling nations with cycling firmly embedded across Scotland as the favoured way to travel to school and work, as an enjoyable leisure activity and an efficient way to improve health.”

Chris Hoy, six-times Olympic gold medallist, said, “to see Glasgow build on the legacy of the Commonwealth Games in 2014 – and more recently the European Championships – to become the first city to host a combined cycling world championships is a real coup for the city and Scotland. I’m looking forward to witnessing first-hand what I know will be another fantastic event not only on the velodrome track in 2023, but across all disciplines of our great sport.”

Katie Archibald, Olympic gold medallist and three-time world champion, said, “I’ve competed in a few major events in Scotland, and they are amongst some of my career highlights thanks to the amazing support myself and my team mates get from the home crowd. The UCI World Championships 2023 sounds really exciting, it’ll be the year before the Paris Olympics, meaning all the nations will be ramping up their preparations so the racing will be great to watch. I also like the idea of being able to support my team mates from other disciplines in their world championships.”

Councillor David McDonald, Chair of Glasgow Life and Depute Leader of Glasgow City Council, said, “this is a huge announcement and achievement for the city. Being the first ever hosts of this event – which will become the pinnacle of the international cycling competition calendar – will cement Glasgow and Scotland’s position as a worldwide leader and innovator in the planning and delivery of major sporting events.

“Our city is one of the top five sporting cities in the world, and events like the 2023 UCI Cycling World Championships will help us continue to climb these rankings and realise our big aspirations. This event will be the biggest event staged in the city, and indeed the country, in the coming years – and we cannot wait to welcome athletes, officials, and spectators from around the world to Glasgow.”

Today’s announcement follows months of work by EventScotland, Glasgow Life, UK Sport and British Cycling to secure the event after the UCI announced its ambition to create this brand new cycling concept back in 2018.

Dame Katherine Grainger, Chair of UK Sport said, “UK Sport is delighted to see that Scotland has been chosen as the first ever host of the exciting new concept that is the 2023 UCI Cycling World Championships.”

“The decision from the UCI demonstrates once again that the UK remains a world leading innovator when it comes to hosting global sporting events as well as an open and welcoming place for athletes, coaches and fans across the globe.”

“This move provides real confidence as we look to deliver our ambitious event hosting strategy and I would like to thank National Lottery players for their support because it is their backing that will allow us to bring more of the world’s top sporting competition to the UK.”

Paul Bush OBE, VisitScotland’s Director of Events, said, “we are delighted that Scotland has been chosen to host the inaugural UCI Cycling World Championships in 2023. I’d like to thank President Lappartient and the UCI for awarding the event to Glasgow and Scotland and for trusting us to bring the vision of this exciting and historical new event to fruition. Securing a competition of this global magnitude reinforces Scotland’s position as the perfect stage for events and one of the world’s leading sporting destinations.”

“The competition will once again provide another significant opportunity for both visitors and locals to celebrate some of the world’s elite cycling talent across a range of events. We look forward to working closely with UCI and wider partners to deliver this landmark event for Scotland.”

It will also provide opportunities including volunteering and workforce development, as well as supporting British athletes in their preparation and qualification for the Paris 2024 Olympic Games.

Frank Slevin, Chair of British Cycling, said, “at British Cycling, we do not judge the success of major events only by the medals won, but by the numbers of people inspired to get active by getting on their bikes. Hosting the 2023 UCI Cycling World Championships reflects the pioneering success of Scotland’s national events strategy, Scotland the Perfect Stage, and also represents an amazing opportunity to transform a whole nation’s relationship with the bicycle. We look forward to working with our colleagues at Scottish Cycling to ensure the benefits of this event will be felt in Scotland long after the final race has been won.”