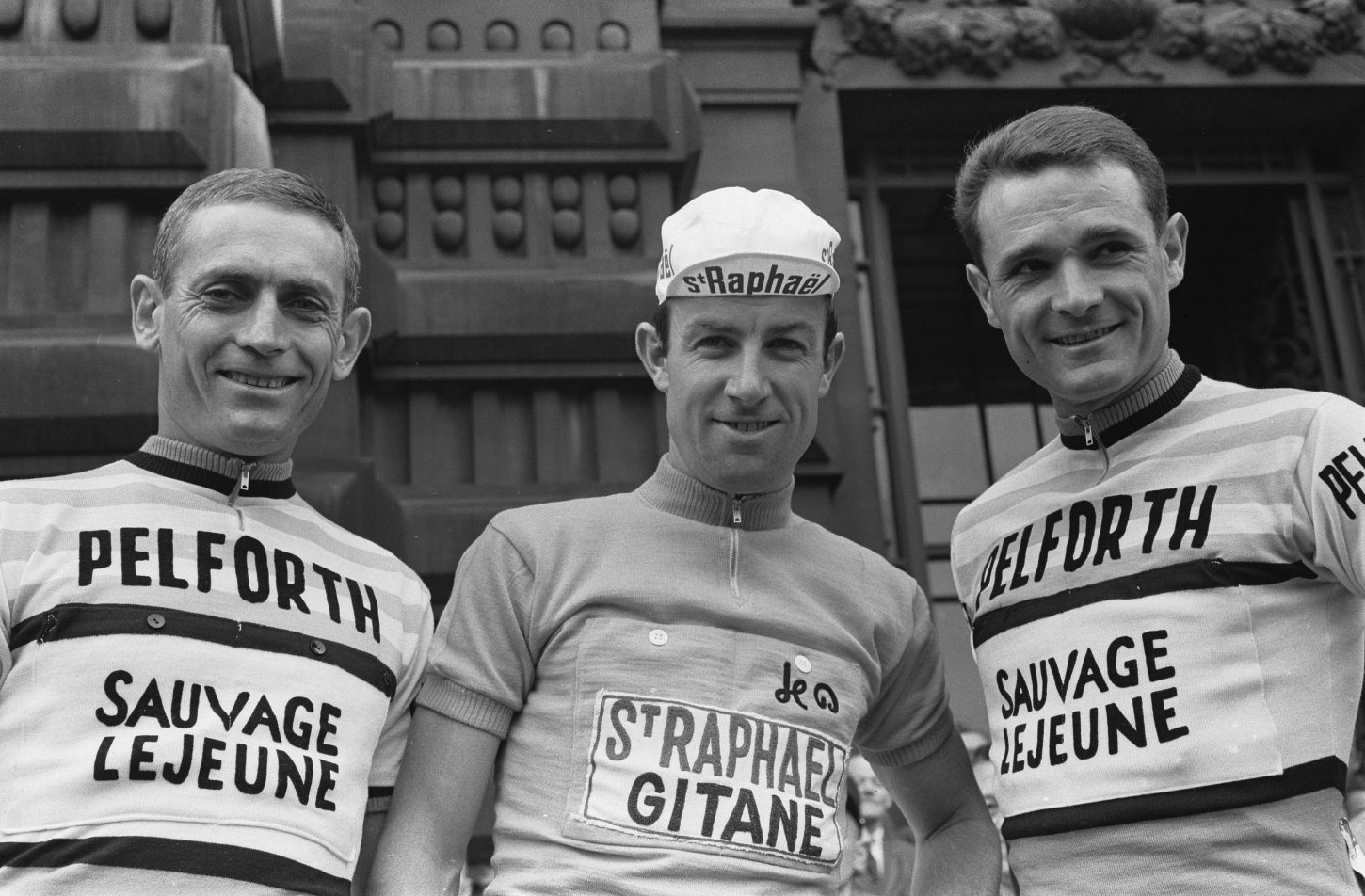 Elliott is best remembered as being the first Irishman to establish himself as a professional rider in continental Europe, albeit riding in the shadows of such luminaries as Jacques Anquetil and Jean Stablinski as a domestique.

Nevertheless, he managed to win stages in all three Grand Tours, while also finishing 2nd to Stablinski in the 1962 World Championship Road Race in Salò, Italy.

Additionally, he became first Irish rider to wear the yellow jersey in the Tour de France, capturing the maillot jaune during the 1963 race, while also finishing third in the Vuelta a España the previous year.

Elliott was born in Dublin, the eldest son of James and Ellen Elliott.

His first exposure to cycling came at the age of 14, relying on a bike as his only means of transportation to get him to the Town of Naas so he could participate in soccer and hurling events.

He later joined a small cycling club attached to a local parish in Coolock when he was 16, taking part in short races that the church organized around the city streets.

Story has it, he finished 2nd during his first race, riding a scrap bike with a single fixed wheel that caused his pedals to hit the road when navigating corners, while the winner rode a premium racing bike.

Now armed with a capable bike, the adolescent Elliott joined the Southern Road Club the following year, winning the 50 kilometer Grand Prix of Ireland race which was held in Phoenix Park.

The club broke up soon afterwards, prompting Elliott to join the Dublin Wheelers in March 1952. That summer he won the Mannin Veg, a race that was held along one lap of the famous Isle of Man motorcycle time-trial circuit. He also won the Dublin-Galway-Dublin two-day race, winning the race back to Dublin in a sprint.

In 1953, Elliot rode the Manx International while representing Ireland. And, despite falling during a tricky turn, he still managed a 4th place finish. Later that season, he won the Irish amateur road championship, as well as finished 2nd in the Tour of Ireland, which earned him a trip to the Simplex training camp in Monte Carlo the following spring.

After finishing the training camp, Elliott decided to embark on a professional career after consulting with former French professional rider, Francis Pélissier.

According to Elliott, Pélissier encouraged him to compete in as many races as possible, especially in France. But, advised him to avoid racing in Ireland, as it was considered backwater.

As a result, Elliott planned to move to Ghent in Belgium, where he could race several times a week and earn money as an amateur.

However, while training at a camp, he met the journalist and race organizer, Jean Leulliot, who told him he would burn himself out riding the kermesse races in Belgium and urged him to move to Paris.

Moving to Paris and later competing in his first Tour de France proved to be an excellent decision by Elliot, which saw him win the Tourmalet stage in that year’s French Grand Tour.

Leulliot was so impressed with Elliot’s performance, that he wrote in his paper, Route et Piste, “the Irishman is soaked with class and has a great future before him.”

This in turn garnered the attention of Paul Wiegant of the Athletic Club Boulogne-Billancourt in Paris, France’s top amateur team, who quickly signed Elliott that season.

From there, Elliot went on to win five One-Day amateur classics the following season, along with setting a new 10 kilometer amateur World Record at the Vélodrome d’Hiver in Paris.

Elliot turned professional the next season with the Helyett-Félix Potin team, winning his first race, the GP d’Echo Alger in Algeria, after out-sprinting André Darrigade. He also won the GP Catox and the GP Isbergues.

Another highlight that season involved an early breakaway attempt during the Omloop Het Volk race alongside the British rider Brian Robinson.

While the duo was eventually caught by the peloton, Elliott’s form was duly noted by the cycling press.

Later that season, Elliot won the Circuit de la Vienne, which resulted in him becoming teammates with Anquetil and Stablinski, a role that he would remain in under different sponsors for much of his career.

In 1959, he finally won Omloop Het Volk, earning him the distinction as the first foreigner to triumph in the Belgian race.

Cycling historians recount how he attacked on the Mur de Grammont with 30 kilometers to go, dropping all his rivals except the Belgian rider Fred De Bruyne. The pair raced together to the finish where Elliott easily vanquished him.

That season Elliott rode his second Tour de France, but for a national team that included a mix of riders from Great Britain, including Robinson again.

Robinson was reported to have exhausted himself across the Massif Central, causing him to lose considerable time in the general classification. Elliott didn’t fare much better.

As a result, both men finished well outside of the time limit, and were expected to be sent home. The team’s manager, Sauveur Ducazeaux, insisted the judges apply a rule that no rider in the first ten should be eliminated. Since Robinson had started the day ninth, it was Elliott who was sent home.

“The mother hen was cooked; the chick avoided the pot”, the cycling journalist William Fotheringham said.

Elliot came in 3rd in the 1962 Vuelta a España, winning the fourth stage and coming second in the points classification. He led the race for nine days.

Later that season, Elliot found himself in the winning break with Stablinski during the 1962 World Road Championship at Salò in Italy. Interestingly, although Stablinski was normally Elliot’s teammate in the professional peloton, riders rode for national teams during that year’s  World Championships.

Nevertheless, the duo worked together to wear down the other members of the breakaway group. When Stablinski attacked, Elliott refused to chase and the Frenchman won alone. Elliott eventually broke away to take the silver medal. Elliott admitted he had sacrificed his chances to win for Stablinski.

“Team loyalty was a theme that ran throughout Elliott’s career,” noted the editor of Cycling Martin Ayres. Elliott said, “I’m not supposed to say that I helped Jean, but he’s the best friend I’ve got in cycling and godfather to my son, Pascal. So I couldn’t very well go after him, could I?”

The following season, Elliot claimed the yellow jersey in the Tour de France, holding onto it for three days. Again, making him the first Irish rider to don the maillot jaune.

It would be another twenty years before another Irishman, Sean Kelly, would put on the yellow jersey again.

Much of Elliott’s career during the ensuing years was relegated to the role of a domestique, sacrificing himself for his team leaders.

In 1965, Elliott was contracted to ride London-Holyhead. At 275 miles, it was the longest single-day race in the world, which didn’t allow “pacers”.

The famous British rider, Tom Simpson, won the race, beating Elliott and a domestic professional, Albert Hitchen. But, not without controversy.

Indeed, Cycling featured a picture of the final sprint, wherein Elliott’s hands could be seen pulling on his brakes before the finish. This in turned conjured all sorts of speculation that the race had been “fixed”.

Elliott later wrote a newspaper article admitting that he made more money by selling races than winning them.

Elliott’s career started to fade during the mid-1960s.

During that period, Elliott planned for his retirement by opening up a hotel in Loctudy in Brittany. This became such an undertaking for him, that he was only able to compete in local races. This put a strain on his relationship with Mercier-BP.

To make amends, he agreed to race in that year’s World Championship Road race.

Unfortunately, Elliot experienced a mechanical problem (his chain came off) at the Worlds, which resulted in a paltry 15th place finish.

His career continued to spiral downwards from there with a failed marriage. The hotel also failed, leaving Elliott broke.

Desperate for money, Elliot later sold a story to the British newspaper, The People, which involved tales of drug-taking and bribery.

Despite the fact that the article went into few details, it was enough for him to be snubbed by other professionals. The same had happened to Simpson when he sold his story to the same paper. Yet, Simpson rebounded from the story, while Elliott’s career never regained momentum.

British cycling journalist Jock Wadley, who had shared a room with Elliott at the Simplex training camp, said, “I knew times were hard for him but nobody knew just how hard until he had to do that.”

Elliott returned to Dublin in 1967 and set up a metal-working business with his father, while his ex-wife and son remained in France.

Elliott tried a racing comeback in Britain in 1970 with the Falcon Cycles team, riding in domestic professional races, while also continuing with his full-time business.

He also continued to race, train juniors and formulate plans for Irish cycling.

In eyes of those who were close to him, Elliot’s grief led to disappear, which turned into depression.

Two weeks after his father’s death, Shay Elliott was found dead in the living quarters above the family business on May 4th.

The cause of death was from a shotgun wound. He was laid to rest alongside his father at St Mochonog’s Church, Kilmacanogue, County Wicklow.

The Shay Elliott Memorial Road Race is held every year in Ireland in his honor. The race was originally known as the Route de Chill Mhantain (Circuit of Wicklow).

A monument of Elliot was later erected at the top of the race’s climb at Drumgoff Bridge in Glenmalure.