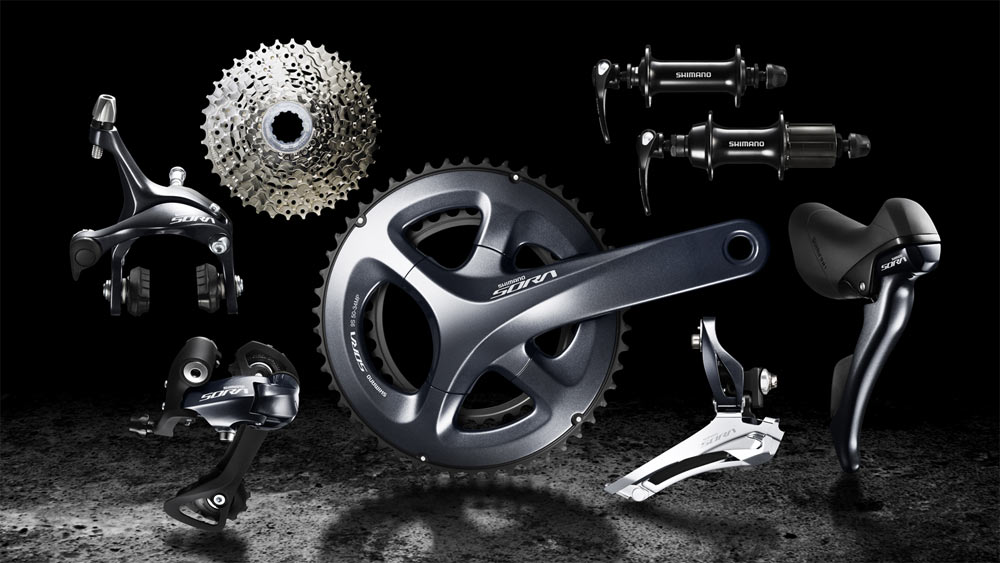 29 Feb 2016
By Campionissimo - In LATEST ARTICLES, THE DOUBLE DIAMOND

Shimano announced today, that its entry-level road groupset, SORA, will receive the trickle down effect for 2016.

Additionally, Shimano has also treated the new SORA to the same four-arm chainset design that first appeared on Dura-Ace a few years ago, and was introduced to Tiagra last year. Furthermore, there’s also a new two-tone black and grey gloss finish for the chainset, shifters, levers, brakes and rear derailleurs.

Another big upgrade to the grouspet, lies in the shifters, wherein the new SORA will have the same “under the bar tape” cable routing, as its bigger brothers, for a cleaner more upscale look.

According to Shimano, the goal of the new SORA was to satisfy a swarth of different cyclists, by offering several applications that range from “flat-bar” commuters, to those wanting a 50-34t or 50-39-30t four-arm crankset, along with a five-arm crankset in either 50-34t or 50-39-30t configurations as well, with the latter having an integrated chain guard.

Shimano is also offering a new 11-34t cassette, along with a long cage rear derailleur and a long arm front derailleur.

“Spinning up hills suddenly got easier with two extra teeth over the previous SORA, while the small 11T sprocket makes sure you have enough high-end range to put the power down,” says Shimano.

Additionally, according to Shimano, the new flat-mount disc brakes can be used with either steel of stainless steel rotors.

Lastly, Shimano has updated the RX31 wheelset with new AX720 hubs with existing E-Thru technology, based around 12mm thru-axles.

No word on pricing as of yet, but Shimano says the groupset will become available later in the season.