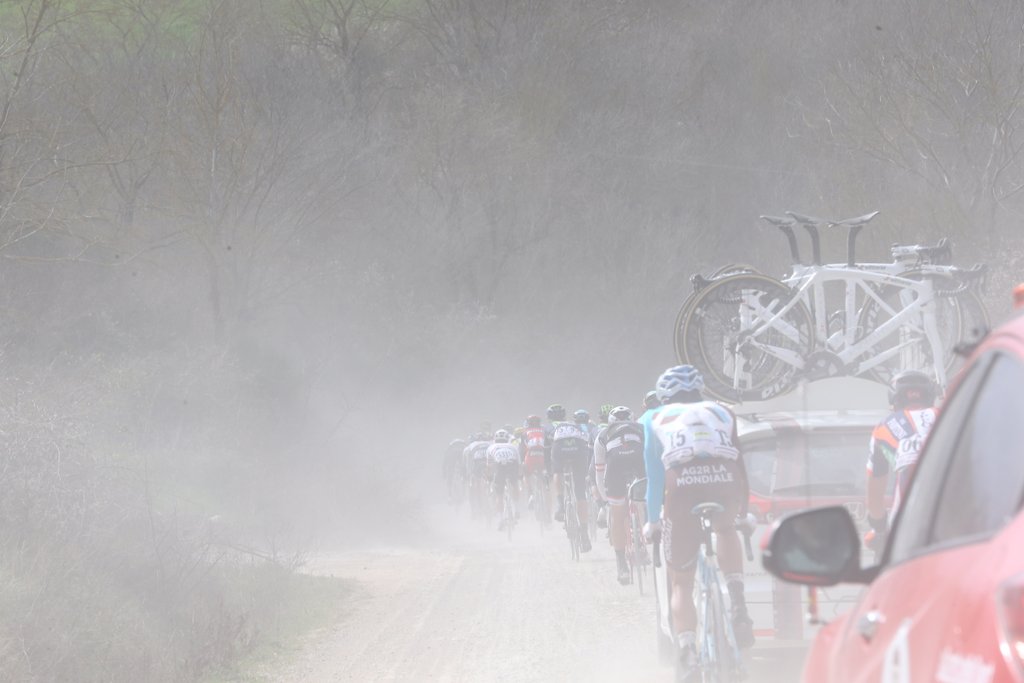 “This day is special,” Cancellara said after the race. “I had to play my best cards. I’m speechless. I knew that I couldn’t let Brambilla get too far ahead, despite Etixx-Quick Step outnumbering me.

“I used my experience and confidence to leave it to the very end. It’s because I know myself very well. To win it for the third time means that I have made history as I’ll now have my name on a gravel road. I put my mark in Siena forever. It makes me happy.”

Not long after, Puccio suffered a mechanical problem, which brought a quick close to the Italian rider’s time in the breakaway.

With 35 kilometers to go, the lead quartet was holding onto a slight lead of less than a minute, as riders from Sky and Astana were busy setting the pace back in the chase group.

With less than 22 kilometers remaining, Brambilla decided to attack his breakaway companions along the penultimate gravel sector.

From there, he was joined Etixx-QuickStep team-mate Stybar, Cancellara and Peter Sagan from the lead chase group.

Behind, the peloton had become strung-out as a result of the pace being set by Vincenzo Nibali (Astana), Michal Kwiatkowski (Sky) and Greg Van Avermaet (BMC).

Back up front, Sagan led the leaders into the final gravel sector with its steep climb, as they continued to cling on to a 13 seconds ago over the chase.

Inside the final 10 kilometers, co-operation amongst the four lead riders began to falter, with Cancellara gesturing to the Etixx duo to hasten the pace.

Shortly after, Brambilla answered with an attack, while Stybar proceeded to sit on Sagan and Cancellara’s wheels.

Back in the chase, cohesion was also faltering, as the four leaders were seemingly allowed to remain out front.

Brambilla hit the final climb in a solo effort, but was unable to shake off either Cancellara or Stybar behind.

Sagan meanwhile began to fade, as he failed to catch Brambilla.

Cancellara and Stybar turned the final right-hand corner neck and neck, but Cancellara’s final sprint into the Piazza del Campo proved unassailable for the Czech rider.