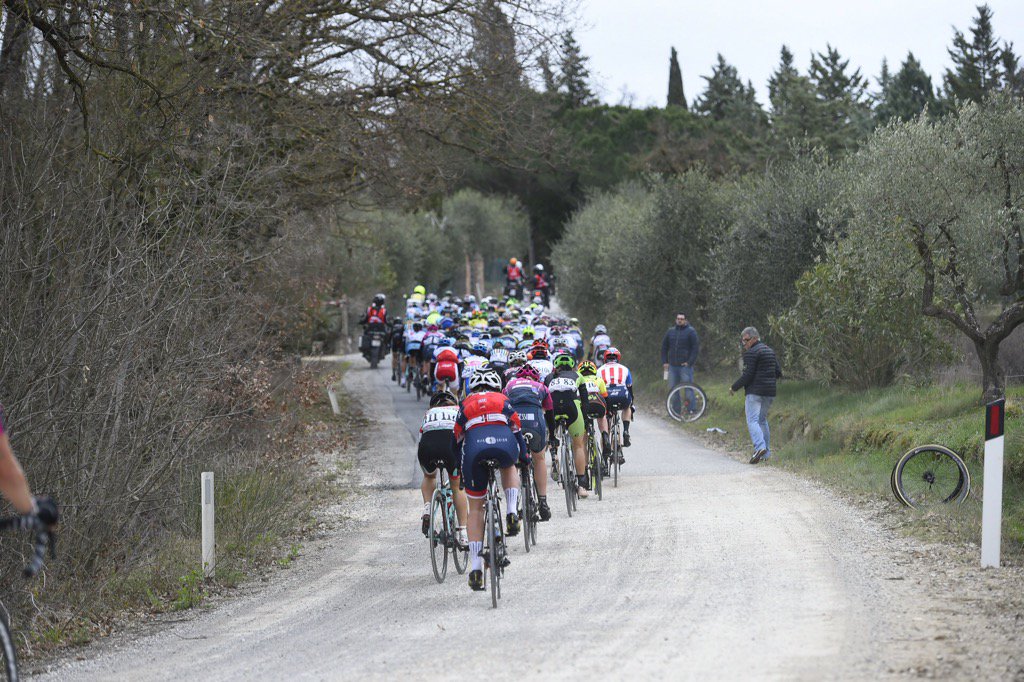 Elisa Longo Borghini (Wiggle-High5) won the women’s edition of the Strade Bianche today, after out-sprinting Kasia Niewiadoma (WM3) and Lizzie Deignan (Boels-Dolmans) to claim her first victory of the season.

Longo Borghini, Niewiadoma, Deignan, Annemiek van Vleuten and Katrin Garfoot formed a small breakaway group along the final sector of gravel during the run-in to the finish in Siena.

However, the quintet was soon joined Lucinda Brand and Shara Gillow.

From there, Brand attacked almost immediately, quickly opening up a slight gap on the final climb to the citadel. But, the determined chase group easily clawed their way back into contention over the top, where Longo Borghini delivered her winning move to seize the first Women’s WorldTour race of 2017.

Today’s 127 kilometer race got off to a fast pace, with several riders getting dropped along the first sector of gravel.

It wasn’t along the fourth sector of gravel however, that the attacks started to get underway, subsequently stringing out the peloton.

But, it was along the fifth sector where the peloton really started to fracture, with a large group of 40 riders emerging to leave the rest of the field behind.

However, during the final 25 kilometer approach into Siena, the trio’s advantage began to dwindle.

Vieceli was the first rider to lose contact with the escape group along the steep sixth sector, while her former breakaway companions saw their lead drop to just 30 seconds.

The remaining two riders were eventually caught along the seventh sector, where they were joined by Deignan, Longo-Borghini, Niewiadoma, Katrin Garfoot and van Vleuten.

From there, the leaders proceeded to reestablish a gap of around 30 seconds.

However, as they returned to the streets of Siena they were passed by Shara Gillow (FDJ-Nouvelle Aquitaine Futuroscope) and Omloop Het Nieuwsblad winner Lucinda Brand (Team Sunweb), who quickly opened up a slight gap for themselves.

But, despite their valiant effort, both were caught and dropped by the three chasers during the final climb into the city center, where Longo Borghini commenced her winning move.

Speaking seconds after the finish, a victorious Elisa Longo Borghini (Wiggle High5 Pro Cycling Team) said: “This is amazing! I had a bad crash in the longest gravel road section – I thought I couldn’t make it but I had super team-mates. Audrey Cordon gave me her bike; eventually, after some kilometers, I was able to get my spare bike from the car. The team was just amazing. This victory is for my them because, from the start, the girls rode so well. This is such a prestigious victory: I think I will remember this for ever. In the finale I was sure I was one of the strongest at the front as I knew that when riders attack like this [like Shara Gillow and Lucinda Brand did within two kilometres to go], it’s because they’re running out of gas. So I went full gas in the last climb. Between the Tour of Flanders and the Olympics, this is one of the most beautiful victories because this is such an incredible place and such an amazing race.”