“Super Cycling Man” Continues His Ride Around the World 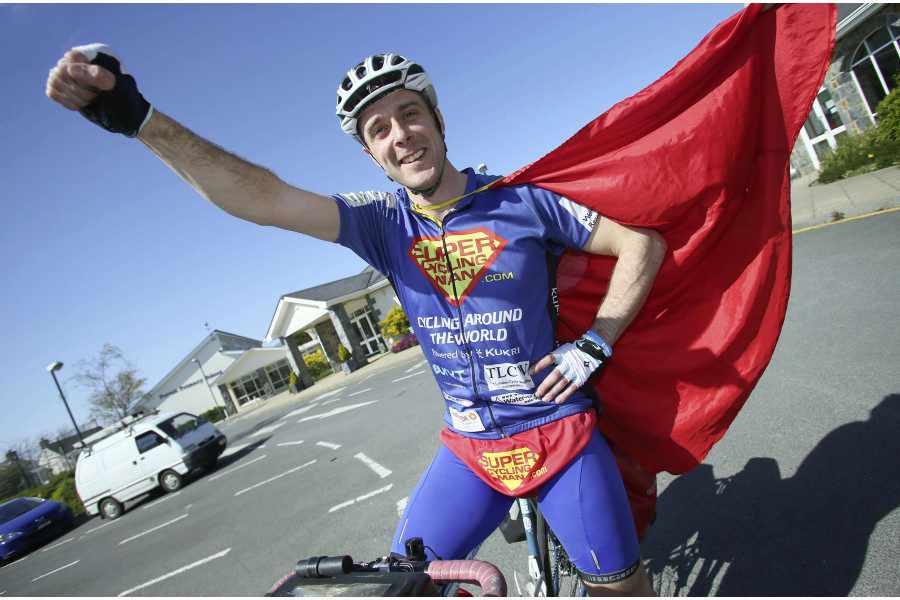 Last we checked in with our friend Will Hodson, aka Super Cycling Man, he was just leaving his home in the UK to embark on a 100,000 kilometer trip around the world.

As of late, “Super” (as we like to call him), has been making his way through eastern European, and is currently stopped in Istanbul, Turkey, where he hopes to have a down jacket made to complement his “Super” ensemble.

Along the way, Super has been met with all kinds of support and generosity. In fact, in some instances, he’s even been featured on various television networks – making him somewhat of a celebrity, as he passes through each country.

“I was a D-list celebrity in the Balkans! Serbian TV was filming the refugee crisis on the border with Hungary when I rode through the opposite way. They filmed from the car and the next day I watched myself on the news!” he said.

“Then I bumped into a TV presenter in Macedonia and he asked me to appear on a daytime TV show, which I did. Random things keep happening!

“When I look back at the photos of the last four months, it’s been such a lot of fun. I’ve met the nicest people.

“The act of kindness is amazing,” he revealed. “People have packed me off with homemade jam, enough sandwiches to last two days, wooly hats, and some even ride with me for a day. It’s the ultimate generosity.

“My hosts sometime ask me to go into their kids’ schools. Some have also organised local press and TV for me.”

A school teacher himself, Super has made it a priority to stop and visit at schools along the way, where he hopes to make a positive impression on the  children.

“I’ve been to about ten schools and I show them a presentation of where I’m from, asking them if they recognise Tower Bridge and who can name the seven continents, et cetera,” he added.

“I tell them that this is a dream and they can do what they want to do. They can dream, too.

“I’m an ordinary guy having an adventure of a lifetime. An adventurer doesn’t have to be a bearded weirdo.

“Teachers give me contacts in other parts of the world, asking me to take things to other schools.

“The kids follow me on Twitter and Facebook, asking silly questions and tweeting me saying that they’ve been on their first bike ride or a micro-adventure.”

Throughout his adventure, Super has been raising money and awareness for the World Cancer Research Fund, Parkinson’s UK, World Bicycle Relief Fund and Sustains.

We can’t wait until he reaches the USA!

You can donate here.