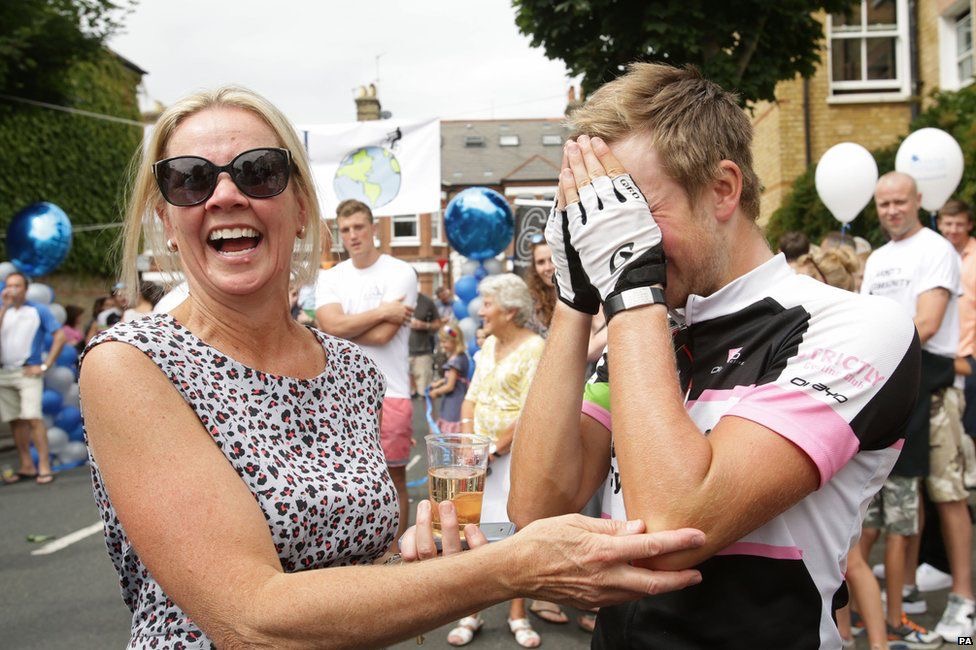 A teenage cyclist raised his arms in triumph, while arriving in London yesterday, after completing an 18,000-mile journey that will likely make him the youngest person to cycle around the world.

Tom Davies, 19, was cheered home by about 100 family members and friends, after he completed the final leg from Poole, Dorset in the UK – after 174 days on the road.

Davies, who experienced all kinds of people and animals during his passage through various contents during his seven months in the saddle, was overcome with emotion after stepping off his bike at the end of the challenge.

“I’ve just cycled around the world. It’s the best feeling,” Davies said. “It’s been a lot of pain, a lot of suffering, so it’s amazing to finish.

“My legs are tired. It’s hard. Snow, rain, wind, hills, other drivers,” he said when asked about his achievement. “I’m going to give my legs a couple of days off but I’ll be back on the bike soon.”

Davies has raised nearly £60,000 for charity, while pedaling about 100 miles a day at at an average speed of around 17mph.

“The trip has been amazing, but I didn’t really know what to expect heading into it,” Davies said. “It has been incredible to see the countries and experience the different cultures in this way, while also pushing myself harder than I ever thought possible.

“I have been overwhelmed by the hospitality of people all around the world, which is something I didn’t necessarily expect but has made it much more rewarding. I am delighted that the three charities will benefit from my trip, and cannot express how grateful I am for all the support from my family, friends and almost everyone who has heard about it.

“The last seven months have been very intense and I am looking forward to a few weeks off before heading to university.

He said he had discovered cycling was his passion after being inspired by his father, with whom he cycled from London to Chamonix in the Alps, aged 15.

“Since then I’ve done quite a few amateur road races around the UK and have spent a lot of time riding with Strictly CC, a cycling team based in south London,” Davies said.

The trip raised money for charities including Prostate Cancer UK; Carney’s Community, which works with disadvantaged young people; and the Sohana Research Fund, set up to support Sohana Collins, a teenager who suffers from recessive dystrophic epidermolysis bullosa, an incurable and often fatal illness that causes severe blistering of the skin.

Davies broke down in tears after the cycle and said: “I met Sohana herself and it’s just inspirational what she goes through every day. I’ve had a hard seven months but she puts up with it her whole life.”

Davies’s mother, said she and her husband spent more than a few moments worrying about their son, but were proud of what he had achieved.

She said: “He had a few hairy moments, like being chased by dogs in Albania. He recovered from it OK, although I think his heart was pounding a bit.

“There was a very special moment when he found himself riding alongside an emu in Australia. The emu was right next to him and running parallel.

“It certainly is not just any gap year. We are incredibly proud. It feels a bit surreal, Tom certainly feels it is surreal.”