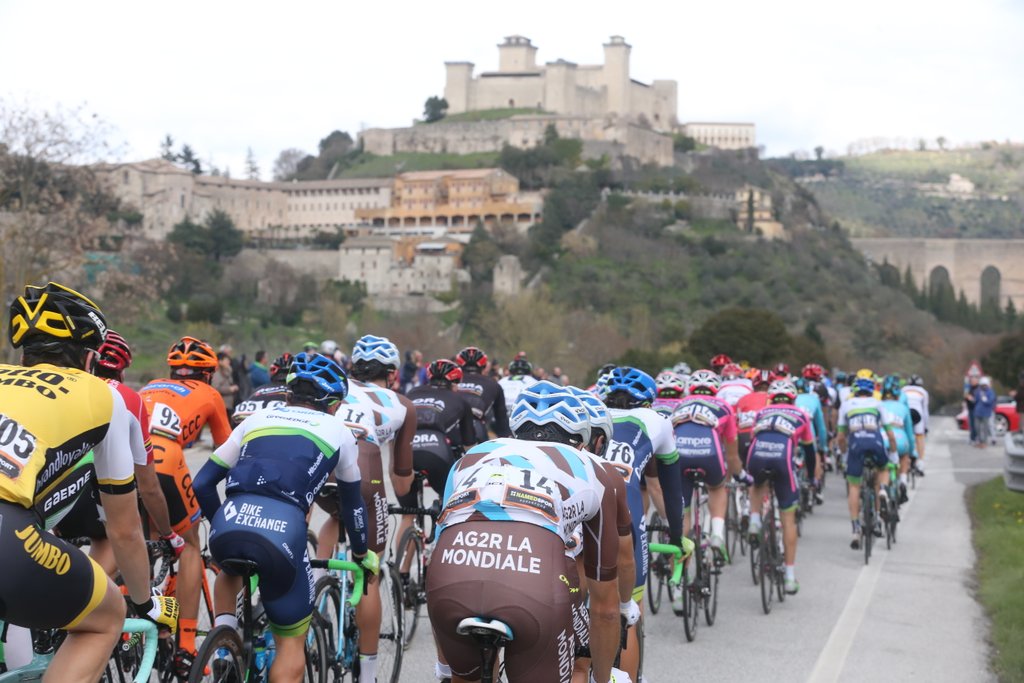 Steve Cummings (Dimension Data) claimed stage 4 of the Tirreno-Adriatico today, in a solo finish after executing a late attack during the final 3 kilometers.

Indeed, the British rider accelerated out of a small escape group with 3.6km remaining, ultimately riding clear to win by 13 seconds ahead of Salvatore Puccio (Team Sky).

Cummings had initially been working for team-mate Edvald Boasson Hagen and was only in the breakaway to slow it down and keep his team represented.  However, since the peloton failing to organize a chase, Cummings decided to attack and once he gained a small gap over his fellow escapees, a first victory of the season never looked in doubt.

“We were trying to do a stage for Edvald Boasson Hagen. We thought he was the best chance today. He is in super form.

“I was there as the policeman really, but then it came to 3km and normally I can do 3km alone, so I tried to do that strategy. I don’t know if that was OK, but it seemed to work out all right.

“I was pretty confident. I sit pretty aero on the bike. Everyone else had been pulling, but I hadn’t been pulling. It worked.

“It was good having Edvald behind because it meant we didn’t have to do anything. It was a great team performance. I was just lucky at the end.”

Meanwhile, Zdenek Stybar (Etixx – Quick-Step) finished safely in the peloton in 10th place, 25 seconds behind Cummings, to retain his grip on the overall lead of the race, nine seconds ahead of BMC Racing duo Damiano Caruso in second and Greg Van Avermaet in third.

The seven-day race had been due to continue on Sunday with a crucial 178 kilometer fifth stage ending with a summit finish on Monte San Vicino, but snow in the mountains has forced organizers to cancel it.

Instead, the race will resume on Monday with a rolling 210 kilometer stage from Castelraimondo to Cepagatti and then conclude on Tuesday with a flat 10 kilometer individual time trial starting and ending in San Benedetto del Tronto.

Race organisers had a Plan B and Plan C in place for stage five, but both alternative routes were also affected by snow.

The stage’s cancellation is a major blow to climbers such as Vincenzo Nibali, Tejay van Garderen and Wout Poels, who had been attracted to ride the race by that stage in particular.

Earlier in the day, a four man breakaway of Cesare Benedetti (Bora-Argon 18), Manuel Bongiorno (Bardiani–CSF), Valerio Conti (Lampre-Merida) and Ricardo Vilela (Caja Rural–Seguros RGA) had over 5-30 on the peloton at the peak of their escape. Not wanting to hang around while his break companions were caught, Conti went solo and almost held a two minute gap over the charging peloton.

The gap dropped below one minute, causing the race vehicles to come out of the gap, at which point Pim Ligthart (Lotto-Soudal) attacked from the front of the main pack. The young Dutchman’s move soon came unstuck, and shortly after Conti was drawn back into the peloton.

Movistar moved to the front and set the pace on the Trevi climb before Fabian Cancellara (Trek-Segafredo) came through and put in a huge turn.

With under 15 kilometers to go, two riders attempted to go clear but Cummings brought them back on a descent.

After multiple attacks and counter-attacks from the reduced main group, Peter Sagan (Tinkoff) stretched his legs with 8 kilometers to go, but the other riders were alive to the danger. Next to have a go was Puccio and although he gained a gap the rest of the group was back together before the 5 kilometer to go marker.

With less than 4 kilometers to go, Cummings launched his winning move – quickly creating a small gap. And, from there, the Dimension Data rider went into full time trial mode.

Once he went under the 1 kilometer to go marker, his victory was never in doubt.