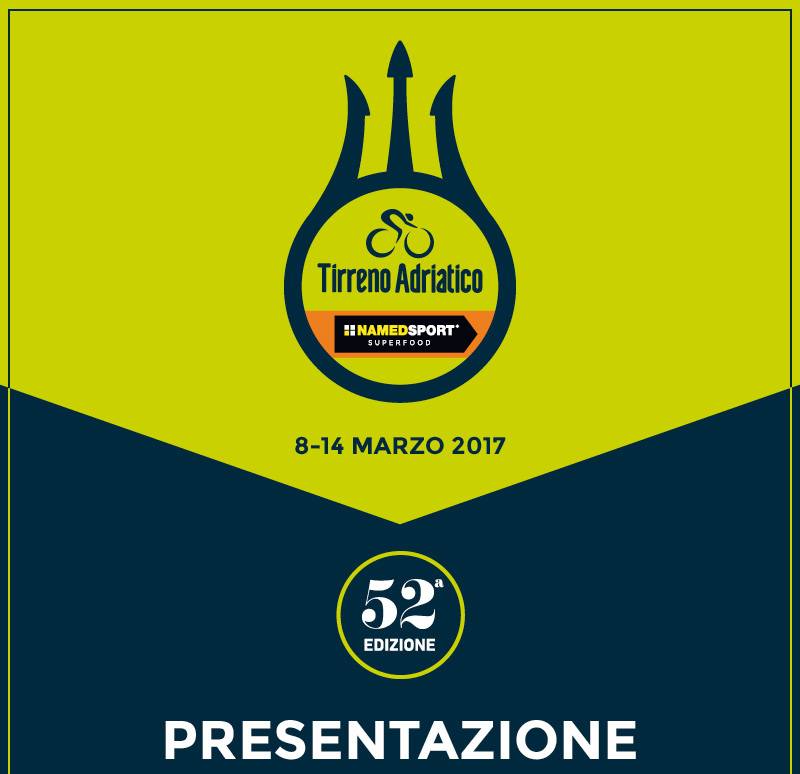 Organizers for the Tirreno-Adriatico announced the details of the 2017 race during a presentation in Camaiore, Italy today.

The 52nd edition of the “Race of the Two Seas” will again start with a team time trial in Lido di Camaiore on the Tuscany coast, and end with the traditional, short individual time trial on the sea front of San Benedetto del Tronto.

In addition, next year’s route will include over 1,300m of climbing, making it a much more challenging race than in recent years.

The year before that, Nairo Quintana won the race, after a stunning solo performance up the snow-covered summit of Terminillo – to claim the both the stage victory and the final race honors.

Tuscan sprinter Daniele Bennati was at the route presentation and hinted that Quintana would be back to race for overall victory in 2017. Vincenzo Nibali (Bahrain-Merida) and Fabio Aru (Astana) are expected to clash for the first time as rivals at Tirreno-Adriatico before their highly anticipated rivalry at the Giro d’Italia in May.

The head of RCS Sport, Mauro Vegni, hinted that Team Sky has promised to send a “strong squad” to Tirreno-Adriatico which is likely to reflect their line-up for the Giro d’Italia. Vegni refused to reveal if that includes Chris Froome but hopes to have many of the biggest Grand Tour riders at Tirreno-Adriatico. World champion Peter Sagan is also expected to ride again as he prepares for the spring Classics.

“The route follows the one proposed in recent years with the initial and final time trials, two sprint stages, two stages for finisher  and an uphill finish that this year returns to the Terminillo,” race director Stefano Allocchio explained at today’s presentation.

Tirreno-Adriatico crosses central Italy from Tyrrhenian coast to the Adriatic with the Apennines offering some stunning climbs. The 2017 opening team time trial is again on a flat and fast course with just four corners slowing the riders. The following day is a rolling stage from Camaiore to Pomarance near the Tuscan coast, with four climbs along the route. The last climb is particularly suited for top climbers known for their breakaway ability.

Former world champion, Paolo Bettini, revealed that the second stage will include two testing climbs in the final 70km before the uphill finish in Pomerance, making the 228km a grueling day in the saddle.

The third stage goes from Monterotondo Marittimo to Montalto di Castro, and is expected to again finish in a sprint as it did in 2016, when Fernando Gaviria confirmed his talent.

Saturday’s queen stage starts from Montalto di Castro, and features two intermediate climbs plus the final climb of Terminillo, which is 16km long with an average gradient of 7.3% and maximum of 12%.

Sunday sees what RCS Sport calls the “Muri” stage, which includes a series of short but steep climbs. The stage from Rieti to Fermo passes through the areas devastated by two earthquakes in August and October, in a sign of support to the area that has hosted numerous stages of the race over the years.

The finish in Fermo comes after 209km of hilly racing, with the steep climb up to the finish line covered three times. The sprinters get a final chance to test their legs before Milan-San Remo with a finish in Civitanova Marche after a late but easy climb. The final 10.1km individual time trial of 10.1km is around San Benedetto del Tronto.