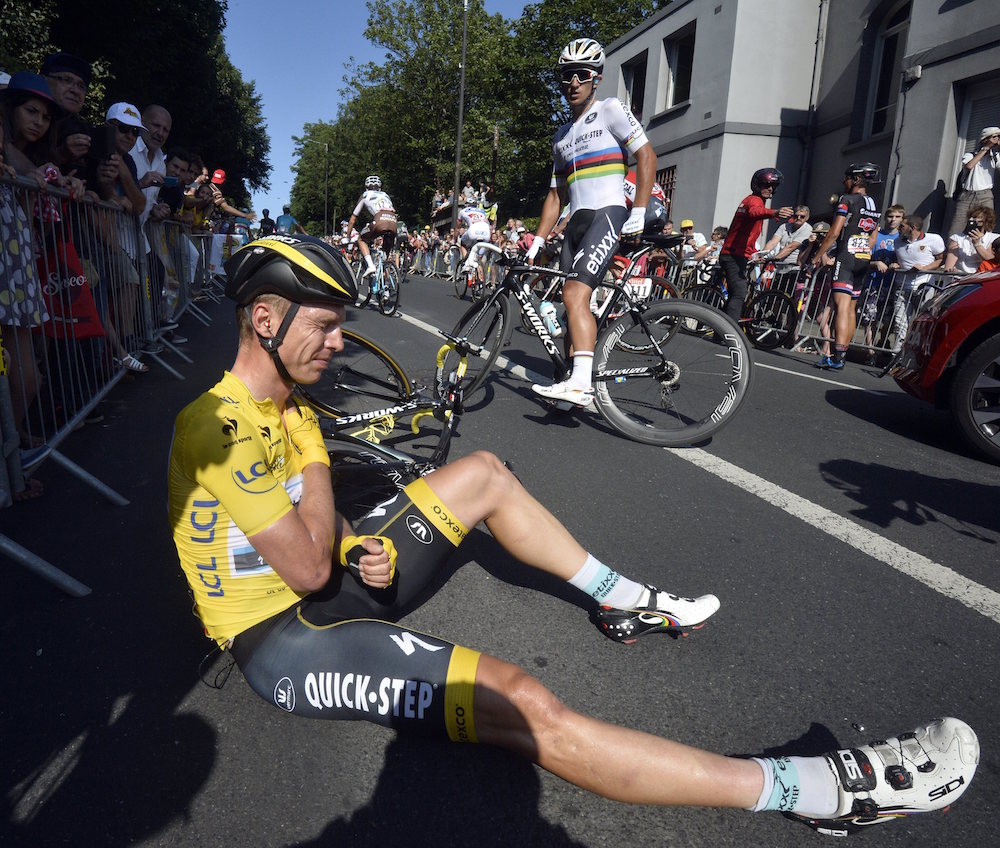 10 Jul 2015
By Campionissimo - In LATEST ARTICLES, THE GREAT RACE

Tony Martin is out of the Tour de France after breaking his collarbone in a dramatic crash at the end of today’s stage six.

Not long after the crash, Martin was flown to a hospital in Germany for surgery, bringing a close to his reign in this year’s Tour.

Etixx later confirmed Martin’s withdrawal from the race, along with the extent of his injuries on its website.

Etixx – Quick-Step rider Tony Martin will fly to BG Hospital in Hamburg immediately for surgery, and must withdraw from Le Tour de France. Martin, in the yellow jersey as race leader since a Stage 4 solo victory, was diagnosed with a collarbone fracture on the left side of his body that was suffered during a crash inside the final kilometer of the 6th Stage.

“Unfortunately, the collarbone is a lateral fracture,” Team Doctor Helge Riepenhof said. “The collarbone is in lots of pieces, so it was a major impact. One of the pieces came through the skin, which means it’s an open fracture. Therefore, even if it was Tony’s wish to start tomorrow, I have to say he is not allowed to. Riders always want to race. Tony especially. He’s shown in the last years that even with broken bones that he will race if possible. But this is a medical situation where this is impossible. He needs surgery straight away, and that is why we are going to the hospital now. We will fix the collarbone there. He is already on antibiotics. It’s a serious injury, and that is why we can’t risk anything and why he cannot be at the start tomorrow.”

“I can’t remember exactly what happened,” Martin said. “The team put me in a really good position. On the last kilometer no one had the energy left to continue the speed. Everything slowed down, everyone was waiting. Then suddenly I hit the rear wheel of the rider in front of me. I thought I almost could stay upright, but then I went into a rider of Giant-Alpecin and I had no balance anymore. I crashed at relatively low speed, with my full weight on the left shoulder. I felt directly that something was broken. We went to make an X-Ray directly after the finish because i was thinking ‘OK, maybe I am wrong. Maybe I can start tomorrow.’ But now it is confirmed my clavicle is broken. This has been like a movie, an emotional roller coaster at this Tour. Now I am really sad. The team gave everything to protect the jersey today. We had again the chance to do it and try to keep it a few more days. It’s really been a big success up to this point. With Stybar it was such a good moment. It’s so strange to be so sad and happy together. I told Stybar to not be sad for me. I told him to enjoy his day, as he deserves it. I am sure the team will keep the morale high. That’s the Tour de France. I really wish I could continue, to even just start tomorrow, even if it is broken. I wish I could honor the jersey and show it one last time with a ceremony at the start. I could enjoy it a little more than I have the last days and then stop. But it is now clear I need to go to the hospital for surgery immediately, and my race is over. It’s hard to accept. I’d like to keep fighting. But the doctor has the last word, and when he says there is no way to continue I must accept this.”