Tour Down Under 2017 People’s Choice Classic 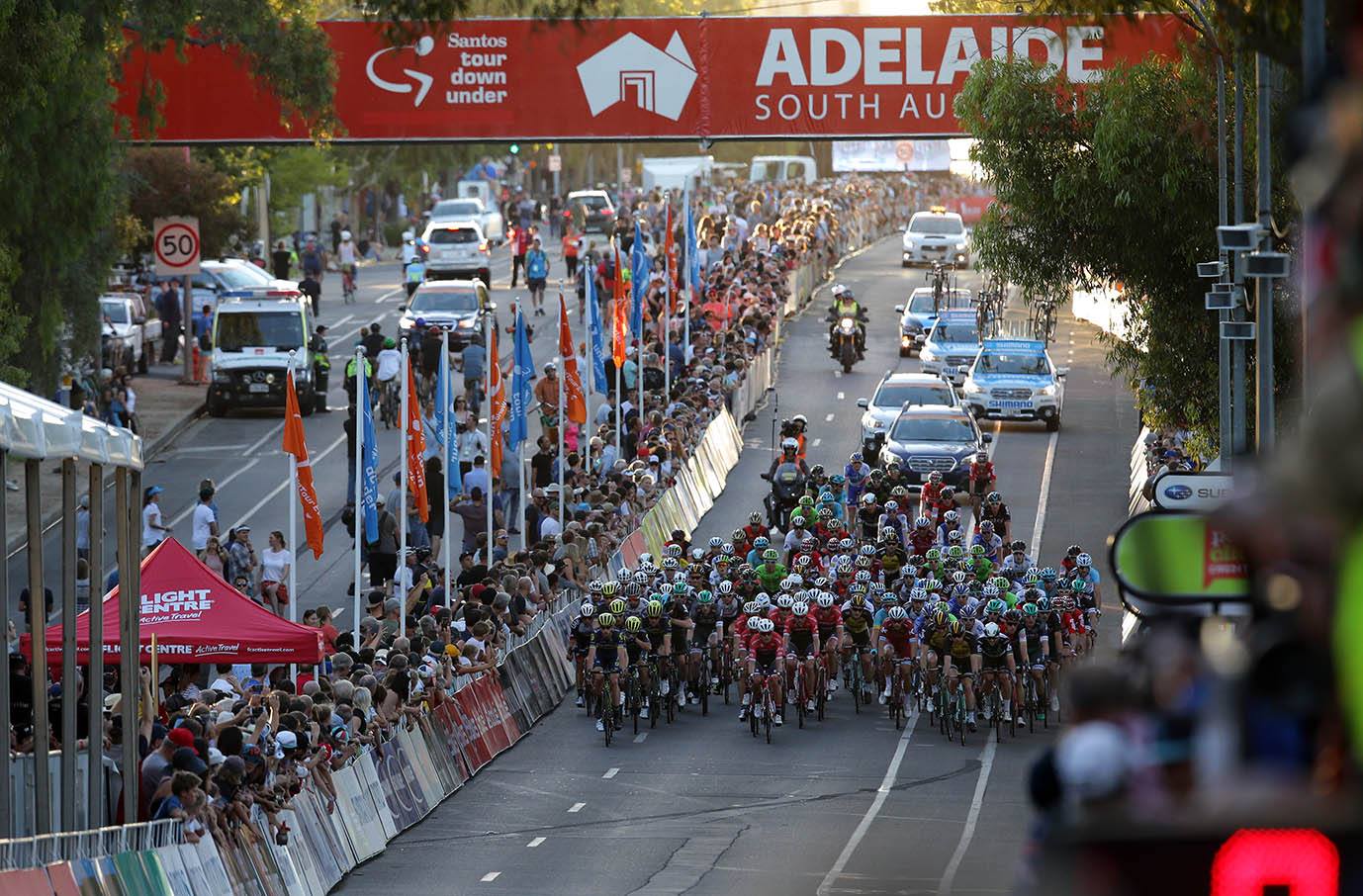 Australian Caleb Ewan produced a sensational sprint off the back of some brilliant work from his ORICA-SCOTT team to win the People’s Choice Classic in Adelaide today.

But as the sun continued to set over the finish in Adelaide’s East End, the name ‘Peter Sagan’ was on so many peoples’ lips – from those of Ewan, to Sagan’s Irish BORA-hansgrohe teammate Sam Bennett who the Slovakian World Champion led out in the sprint finish and all who heard the race caller erupt in excitement when Sagan entered the fray of a finale.

Afterwards Ewan, wearing the Australian national criterium champion’s jersey that he won at Ballarat 10 days ago, said the sight of Sagan in his World Champion’s strip up with him in a bunch sprint added extra spice to the sprint finish in which Bennett finished second place and Sagan took third.

“It’s a nice feeling because at the moment he is the best rider in the world, and to beat him in the sprint … it feels great,” said Ewan for whom the win was his third so far this season after winning the final of three Michelton Bay Classic series races in Williamstown in Victoria before the national title.

Meanwhile, Bennett was still in appreciative awe that a rider of the stature of Sagan had offered to lead him out as he did.

“He is such a big rider and to have him leading me out was nerve racking …” Bennett said.

“He was so willing to lead me out. He was so happy to do it and I just didn’t want to mess it up.

“I didn’t want to take away an opportunity from him.

“It’s the season opener really and everybody is watching it.

“It is Peter Sagan leading me out … I was shaking.”

Bennett said Sagan’s presence in the finale had also attracted plenty of attention from rivals in the field that will reconvene on Tuesday for Hostworks Stage 1 of the Santos Tour Down Under.

“He was marked so even when he was trying to do the lead out in the last corner they were still pushing for his wheel,” explained Bennett with a wry smile, and then adding with a laugh: “I was kind of like, well … ‘Hello …’. He had to hang back until a ‘K’ to go because the fight was for his wheel.”

Sagan refrained from looking too much into the outcome, saying: “It was good, not super good but it was okay.”

But he gave Bennett the thumbs up for his finish. “We did good job but still a little bit mess in the last two laps, then we wanted to do a sprint for Sam Bennett,” Sagan said. “Then he was second … is okay for first race. Not bad.” As for his own form? “We will see. I am going to recover now,” Sagan said.

Ewan was also typically praiseworthy of his teammates – and justifiably – after they had to set him up for the finish after Sky tried to take control of the race in the 20th of 22 laps of the 2.3km circuit, followed by Trek-Segafredo team and then BORA-hangrohe. “They rode absolutely perfectly,” said Ewan.

Ewan is now prepped well in mind and body for the Santos Tour Down Under in which he won stages two and six last year.

“Obviously this is a great race to build your confidence in,” Ewan said. “I have just a whole lot of confidence going into the next week of racing. I can’t wait to get it started.”

Ewan benefited from a dedicated team which lead him around the entirety of the course, and still had more support riders than rival teams’ sprinters as the race rounded the final bend.

Peter Sagan did his best to setup Bennett for the win, but as Ewan was dropped off by a teammate on the front of the bunch on the left side of the road, there was nothing anyone was able to do and he powered his way to a second victory.

The rest of the race had been a fairly sedate affair. Neo-pro Ben O’Connor (Dimension Data) got away into the break with Will Clarke (Cannondale-Drapac) on lap three and admirably continued on his own with a massive solo effort until lap 19 of 22, when he was inevitably caught.

The riders will now take a rest day tomorrow before the Tour Down Under race proper begins on Tuesday with a 145 kilometer route from Unley to Lyndoch that should end in a sprint.