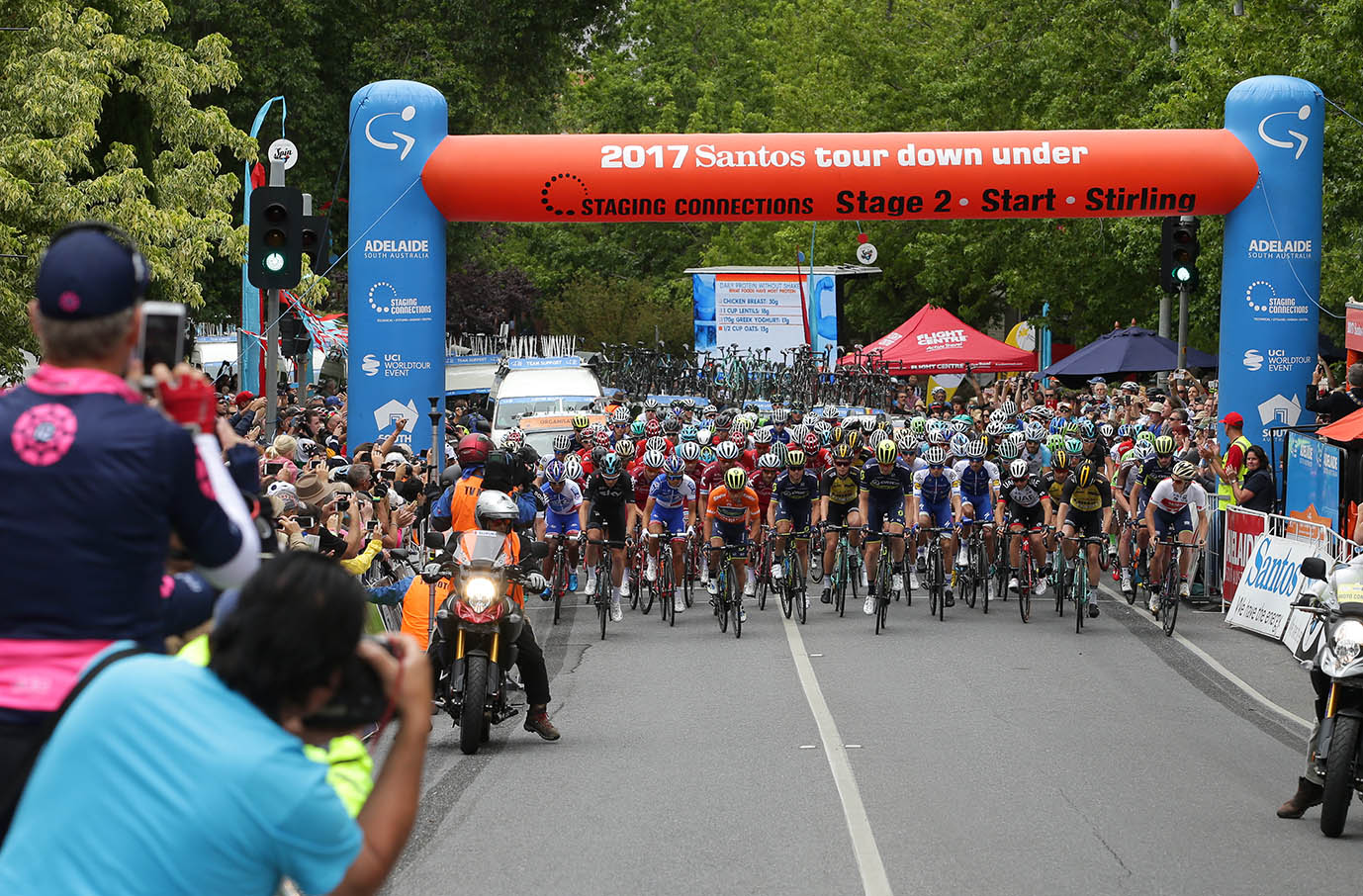 Richie Porte has erased the memories of 2015 to snatch stage honours and the overall race lead after the Staging Connections Stage 2 of the Santos Tour Down Under.

“I had nightmares from two years ago when we played cat and mouse there and it didn’t work,” said Porte who on that occasion was riding for Team SKY and placed sixth. “But the boys from BMC Racing Team are just incredible, they looked after me the whole day (and) I finished it off up to Paracombe.”

“It’s good to get a win this season and now we try and defend this (leaders) jersey.”

Porte broke clear in the final 1500 meters to win the 148.5 kilometer stage into Paracombe by an impressive 16 second margin from Spaniard Gorka Izaguirre (Movistar) who overtook third placed Esteban Chaves of ORICA-SCOTT in the final 400 meters.

Yesterday the race battled searing heat but this morning it was a chilly start in the Adelaide Hills hamlet of Stirling and conditions stayed mild throughout the day providing perfect conditions for the 105 thousand fans who flocked to the spectator friendly stage that included five laps of an undulating 20 kilometer circuit.

“We didn’t really race that hard around Stirling which is a bit of a shame but at the end of the day I think I got a good gap on GC (overall),” said Porte. “I know it’s not over, there’s a few quite hard stages but the guys, the team, are fantastically strong so I’m quite confident.

Porte looked behind several times as he kicked clear to gauge the impact of three attacks he launched in the wake of a big effort from Dutchman Wilco Kelderman (Team Sunweb).

“Credit to Kelderman, he put in a big turn at the bottom there and kind of blew it apart but you know I’ve got good climbing legs and didn’t really want to wait around.”

Porte is happy with the way he rode clear of his rivals but recognises there is work still to be done if he is to claim the race crown.

“There’s some stressful days coming up so I won’t be counting our chickens until they hatch.”

Porte goes into tomorrow’s Hansgrohe Stage 3 with a 20 second lead over Izaguirre with Chaves, a further two seconds back.

“It was a good effort by (Gorka)Izaguirre, but Porte was stronger today,” said Movistar Team Manager José Luis Arrieta. “Porte made one more acceleration and Gorka could not follow but it’s a good sign for the team and we will keep fighting.

“Willunga (on Saturday) is a different climb, but we will race to at least keep (a place on) the podium.”

As expected sprinter Caleb Ewan lost his overall race lead instead working today to help his team mates including Chaves.

“Richie (Porte) made three accelerations very fast, but I could not stay with him. It is like this,” said Chaves. “The guys worked really well for me today. I am happy for the third, and we will continue to try for the win.”

While Chaves acknowledges 20 seconds is a significant margin to claw back, he refuses to concede defeat.

“You never know what will happen and we will keep fighting like always,” said the popular Colombian. “Willunga is like seven minutes (of climbing) but today was harder, because it was climbing all day. I am excited (about the coming days) so we will see.”

At the start of the stage it took a little time for the race to warm up. But ten kilometers into the first circuit Czech rider Ondrej Cink (Bahrain – Merida) and 2011 Tour champion Cameron Meyer (UniSA-Australia) launched the first attack of the day.

They rode out to a 35 second lead before the ORICA-SCOTT team upped the tempo on the front of the bunch to reel them in ahead of the first iiNet intermediate sprint at Heathfield (24km).

However it was Team SKY’s Ben Swift who pounced for the points and the three second time bonus ahead of Australian Jay McCarthy (Bora-Hansgrohe) and Sean de Bie of Lotto-Soudal.

German Jasha Sutterlin broke clear soon after the sprint and the bunch was content to let the Movistar rider go. By the 50 kilometer mark he was 4:30 ahead but as he approached the 65 kilometer mark for the second iiNet sprint of the day, again at Heathfield, his lead was diminishing. Sutterlin nabbed the points with Michael Kolar second across the line with his Bora-Hansgrohe team mate Rudiger Selig behind him in third.

The bunch settled down after the sprint allowing Sutterlin’s lead to stretch out past four minutes again as he raced over the last of the five laps. But any hopes of him staying clear were dashed as the peloton hit top speed and 20 minutes later reeled him in.

“It wasn’t exactly part of a team plan that I’d go away solo but nobody went and nobody came across so I ended up alone,” said Sutterlin who, for his efforts, was named the Most Competitive Rider of the day. “I kept going until about 30km before the finish and then I just did my best to hold the wheels in the peloton and help my team-mates.”

That set the race up for a thrilling finale as the peloton swept down the long, twisting descent of Norton Summit Road.

Mads Pedersen came unstuck on the way down but the Trek-Segefredo rider was soon back on his bike. As the race headed into the final 20 kilometers Rohan Dennis needed a new wheel which put a spoke in his hopes of repeating his 2015 win in Paracombe but with support from Miles Scotson he rejoined the race soon after and recovered to place fourth on the stage 19 seconds behind BMC Racing team mate Porte.

The Subaru King of the Mountain contest of the day was a short, steep 1.6 kilometer Category 2 climb that crested 400 meters from the stage finish line and it was Porte who collected the points on his way through ahead of Chaves. That means Porte also leads the Subaru KOM classification.

“I had some bad luck with a puncture on the final descent and then we changed the wheel that one punctured too,” said Henao. “What can you do? That’s racing and we have to turn the page.”

“We had the team working to bring me back but it was a big effort,” explained the Colombian climber.

“There is still Willunga, so we have to stay concentrated and see if we can arrive to the podium. Maybe first place on GC (overall) is too far, but the podium is still possible.”

Porte’s performance today also gives him the lead in the iiNet Sprint category, on a count-back with both him and Ewan both on 15 points.