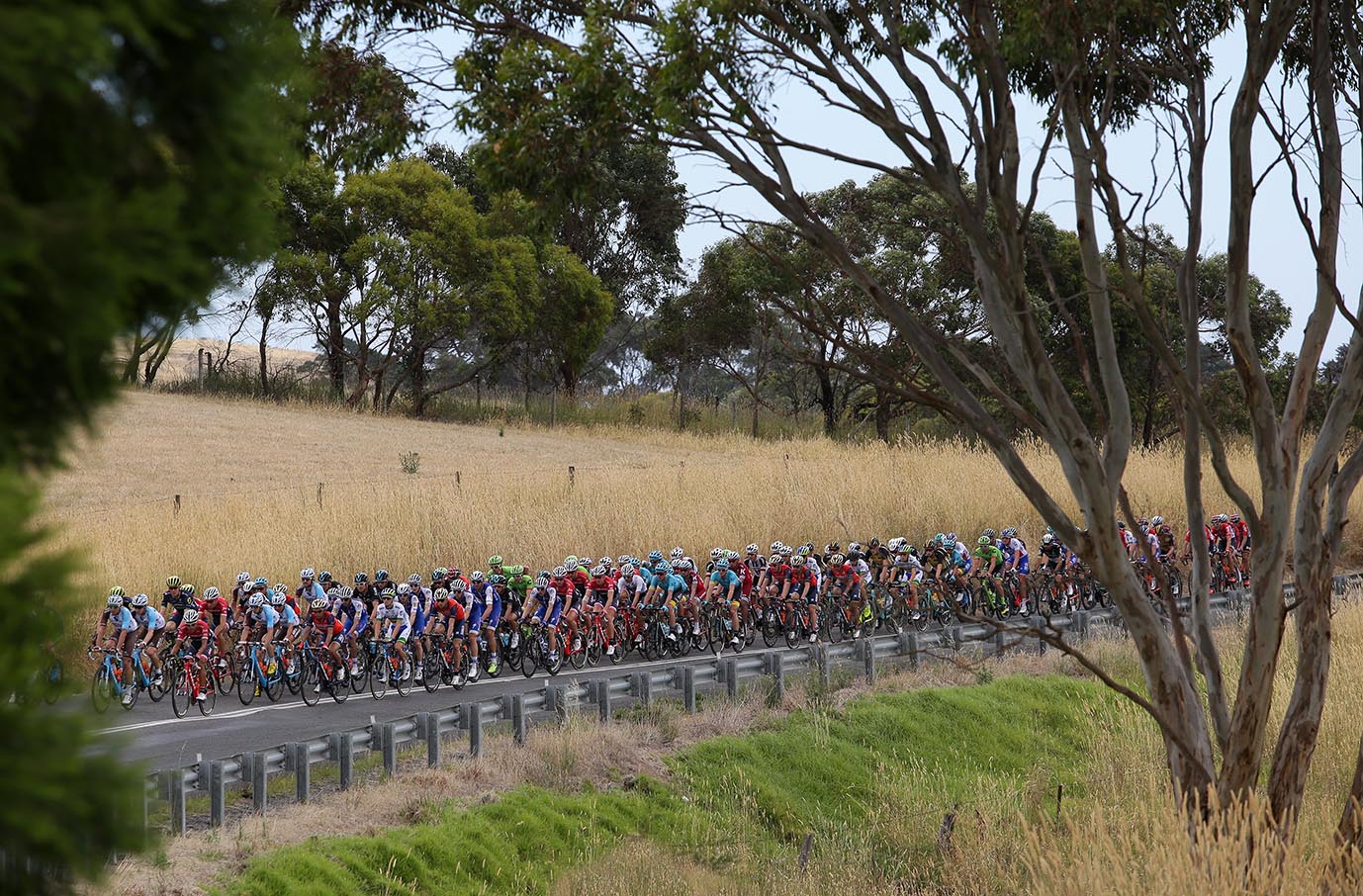 Caleb Ewan unleashed an unbeatable burst of speed in the final 200 meters to claim his second stage win of the 2017 Santos Tour Down Under in the coastal town of Victor Harbor.

Reigning World Champion Peter Sagan was keen to win Hansgrohe Stage 3 for his Bora-Hansgrohe team sponsor but he couldn’t match the sizzling speed of the Australian Champion.

The ORICA-SCOTT star, who also took out Hostworks Stage 1 into Lyndoch on Tuesday, crossed the line at the end of 144 kilometers in a time of 3:24.45, a wheel clear of Sagan with Italy’s Niccolo Bonifazio (Bahrain-Merida) close behind in third.

114 thousand fans flocked to support the riders who set off from the beachside Adelaide suburb of Glenelg before heading along the Fleurieu Peninsula, through the McLaren Vale wine region to contest four laps of the finishing circuit around Victor Harbor.

Ewan had to fight for position after he lost his way in the frenetic pace but once he found a route through the traffic he focussed on the finish line with laser precision.

“I lost a few of my team-mates in the downhill and it was a messy sprint,” said Ewan. “Luke Durbridge took me back to the front with 3 or 4km to go and he positioned me perfectly in the end. I was jumping around the wheels and I’m delighted I made it again.”

Sagan concedes he is not in the same form as Ewan.

“My legs are not bad (but) I am still not in the best shape and for that I am happy because the season is very long,” said Sagan. “You have to be positive and we still have time to get into the good shape.”

“Caleb? He is riding at home and he was all (European) winter in Australia and he was training in good weather,” explained Sagan who resumed training in December after a month off the bike for his annual holiday.

“I am happy with how I am racing now, and he (Ewan) is motivated to be racing here at home,” said Sagan. “He is winning a lot, because he is the best here.”

ORICA-SCOTT Team Director, Matt White, says that while Sagan is deservedly the World Champion, Ewan is doing a superb job.

“Caleb made a great sprint, with great teamwork,” said White. “It was a very hectic sprint in the finale and the most promising thing is that in the last 600 meters, he read the sprint very, very well. He was on the seventh wheel and made up the last 400 meters by himself.”

“Everyone knows Peter Sagan is the best rider in the world, and we also know we are in January, so we’ll see what it means when we get back to Europe,” said White. “But winning is winning, and that’s what he’s doing here.”

Sagan was thankful he arrived at the line unscathed avoiding a crash in the peloton within three kilometres of the line. “I was lucky my team didn’t crash there, it was really fast speed and a dangerous crash,” said Sagan. “I hope the guys who crashed are OK.”

Ewan’s win was even more impressive coming after he spent yesterday’s hilly stage being a helper to support the team’s aspirations of an overall victory through his team mate Esteban Chaves.

“It took me quite a lot of time during the race to recover from the efforts I did for the team yesterday,” said Ewan. “Then at the end we had to ride back a super strong breakaway and It was hard to catch the last guy up the road.”

The ‘last guy up the road’ was Norwegian Stake Vegard Laengen (UAE-Abu Dhabi) who had broken clear of a four man break away that formed soon after the flag dropped to signal the official race start.

The quartet set up a handy lead of more than four minutes by the time they reached the only Subaru King of the Mountain climb of the day, a category 2 climb up Sellicks Hill. Over the top at the 43 kilometer mark it was De Gendt who took the points ahead of Maison and Chevrier.

Three kilometers later the leaders sprinted into Myponga to contest the first of two iiNet intermediate sprints. This time it was Maison in first place ahead of De Gendt with Chevrier again in third.

At 73 kilometers, close to the halfway mark of the stage, the four escapees competed for the iiNet points at Inman Valley. De Gendt rode across first ahead of Laengen and Maison.

As the race went under the arch for the start of four laps of the finishing circuit the leaders were just under four minutes ahead of the peloton with the chase about to begin in earnest.

Two laps, or 26 kilometers from the finish, the gap was under two minutes when Laengen launched a solo attack.

He made a valiant attempt but the peloton behind was in top gear and demolishing his lead. At the bell lap De Gendt, Maison and Chevrier were back in the main bunch and the lead for Laengen was down to 30 seconds.

“Today’s stage was quite short so even though I was in a breakaway all day, it didn’t feel like a long day,” said Laengen who was swamped by the chasing peloton less than 10 kilometers from home. “I felt I was in quite a good shape, that’s why I attacked from the front group because I was convinced I’d go faster alone.

“I came to this race to help my leaders Diego Ulissi and Ben Swift but I was given a free role today so I took my chance.”

His reward for effort was to be named the Most Competitive Rider of the day.

Meanwhile Richie Porte remains in the Santos Ochre Leader’s jersey after his BMC Racing Team did their job to protect him throughout the day. Porte also remains in the lead in the Subaru King of the Mountain classification.

“It was a quite nervous and stressful day,” said Porte. “Sometimes the flat stages are the most dangerous. I’m glad I didn’t crash. Even at the front there were crashes in the finale.

“There is so much to lose on a day like that and I’m relieved I’m still in the lead,” said Porte.

While Porte finished with the first twenty across the line to retain his 20 second lead over Gorka Izaguirre (Movistar), the Spaniard didn’t fare as well, crashing heavily at high speed and losing a lot of skin from his left shoulder.

He has been taken to hospital as a precaution and will have x-rays to rule out any fractures. Race Doctor Mark Fisher says it totally depends on his hospital assessment as to whether he will start tomorrow and a decision is not expected until late this evening at the earliest.

He was credited with the same time as the winner because the crash happened in the final three kilometres as were AG2R – La Mondiale riders Jan Bakelandts and Francois Bidard who lost some skin in the crash.

Ruben Guerreiro (Trek Segafredo) kept out of trouble to place ninth on the stage to remain in the Best Young Rider jersey.