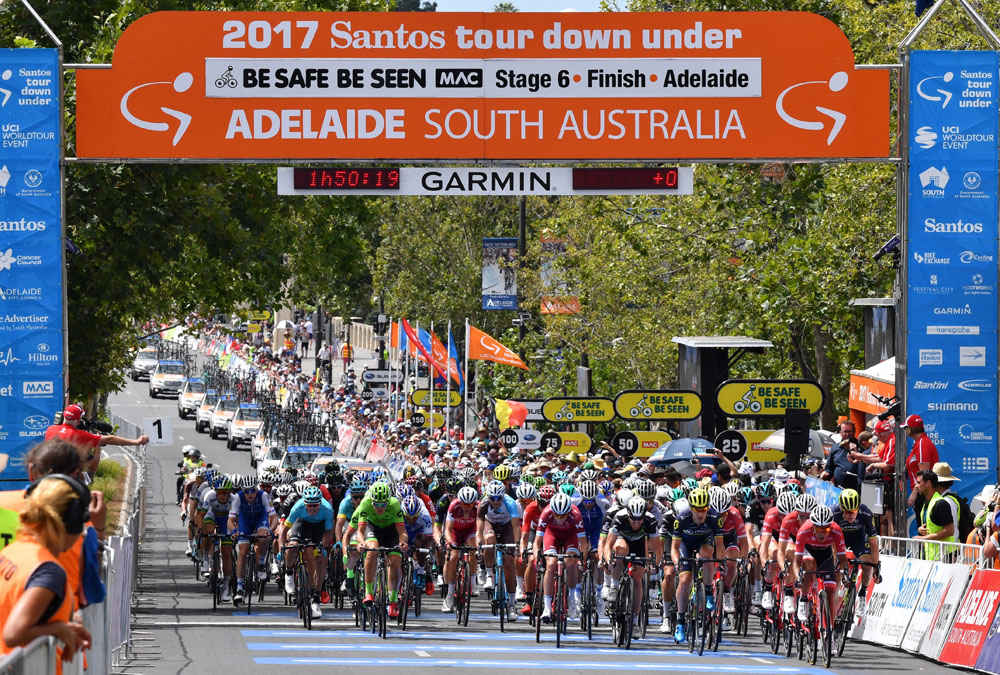 He’s been second twice but today Richie Porte finally took home the trophy, winning the 2017 Santos Tour Down Under by an impressive margin.

It was Porte’s first race back after breaking his shoulder blade five months ago in the Olympic Games road race.

“After crashing in Rio and injuring myself in a nasty crash, it wasn’t too hard to motivate myself for this race,” said Porte. “I had a good break and I came here fresh, physically and mentally.”

“It was a dream for me to win this race.”

But the dream only happened because of superb riding both by him and the BMC Racing Team.

“It’s incredible to come back here and win the Santos Tour Down Under after being so close in the last two years,” said Porte. “I owe each day of racing successfully here to my team-mates. They took me to the line every day and it’s a massive credit to them.”

While Porte has twice won Paris-Nice (2013 and 2015) and in 2015 also won the Volta a Catalunya and the Giro del Trentino, a win in Australia’s prestige WorldTour event has eluded him until today.

“The journalists were saying that the race was over yesterday but by no means was it over,” said Porte despite going into the stage with a 48 second buffer over ORICA-SCOTT’s Colombian climber Esteban Chaves after winning both mountain stages of the Tour in emphatic fashion.

“This is a hard criterium and I’m glad I came out of it unscathed,” said Porte. The Tasmanian crossed safely in 48th position in the bunch at the end of a hectic finale that gave Caleb Ewan (ORICA-SCOTT) his fourth stage win of the tour.

“I can’t believe it,” said Ewan after again edging out reigning World Champion Peter Sagan (Bora-Hansgrohe) on the line ahead of Slovenian Marko Kump (UAE Abu Dhabi) in third. “Actually, coming to this Tour I joked with my girlfriend saying that I’d win four stages and I’ve done it but I didn’t believe I would with the level of sprinters that are here.”

“Maybe Sagan isn’t in his best form but he’s still the world’s best rider at the moment (and) it’s been great having him here. All the people love him. The World Champion racing here, it’s fantastic.”

Sagan, meantime, went into the final 90 kilometer stage, 20 laps of the Adelaide CBD Circuit, with a dual goal. He wanted to sprint well at the finish but that was not his top priority.

“Today we are riding for Jay (McCarthy),” said Sagan before the stage of his team mate who was only three seconds off third place on the overall standings.

“I am very happy… I am getting my condition back, and it’s been a good week of racing.”

“This is a very nice race, it is very organized, and I am glad I am here,” said Sagan after doing his part to move McCarthy into third by giving him a solid lead out in the iiNet intermediate sprint at the ens of lap eight.

“Mission accomplished today,” said McCarthy who grabbed the three second time bonus on the first sprint. “It was tight, but I had a great team leading me out for that intermediate sprint today. who better than the World Champion for the job? It’s a great honor.”

“To make the podium was my goal for the week. At the beginning of the race, people were questioning why I was going for the time bonuses, when there are other places to make a difference, but I always knew the podium would be decided by seconds.”

Also putting his team ahead of his own ambitions was Ewan who also contested the first sprint to protect the second placed ranking of Chaves.

“Today we had to be careful about the podium spot, so that is why we had Caleb to make the intermediate sprint,” said Chaves. “The team did a fantastic job all week, and it has been very special to race here in Australia.”

“Richie was at another level here, so to be second is a great start for me, maybe I can come back next year to try to win.”

The 741 thousand fans who witnessed this year’s race certainly hope he does as the young Colombian is one of the most popular in the peloton.

While Porte won outright he surrendered the Subaru King of the Mountain prize to Belgian Thomas De Gendt.

“With Porte winning two stages, he already had many points (and I knew) it would be hard,” said De Gendt who nonetheless did not give in. “I had to attack two days, and today I had to get into the break before the sprint. I had to give my all just to get that mountain sprint.”

Another race within today’s race was the battle for Best Young Rider honors which Jonathan Restrepo (Katusha-Alpecin) locked up by winning the second intermediate iiNet sprint on lap twelve after joining a breakaway group that formed after the first climb of the day.

“I am very happy… this is important for me, for my team and the sponsors,” said the 22 year old Colombian who finished in tenth place overall. “It was safer to be up the road when I decided to attack.”

The UniSA-Australia national team line up takes home the Wilson Parking Winning Team classification after a week of consistent performances by the seven man roster. They finish 1:19 clear of Movistar in the accumulated final times of their best three finishers.

“The team prize is massive.,” said the team’s best placed rider Nathan Earle who finished the Tour eleventh, 1:06 behind Porte. “We came here at the start of the week without a plan to go for the team classification but after Paracombe (Wednesday), it was possible, and we just smashed it all week.”

“We showed throughout the Tour that we could be consistent,” explained Earle. “It was my goal to try to win nationals where I got fifth and earned a spot to come here. I think I proved myself on the climbs, but unfortunately just slipped out of top ten today.”

The final stage was raced at a cracking average speed of 47km/h. De Gendt (Lotto-Soudal) and Gianluca Brambilla (Quick-Step Floors) launched an early attack with De Gendt’s eyes on the climber’s prize.

But the Bora-Hansgrohe team shut down the break at 13 to go as the bell rang a lap out from the first of two iiNet intermediate sprints.

Despite being stymied early De Gendt wasn’t about to give up and with support from a team mate he pulled clear of the bunch as the race approached the climb for points. De Gendt collected the three points to take the outright lead in the climbing category.

Soon after a breakaway group of five formed with Johannes Frohlinger (Team Sunweb), Ben O’Connor and Jaco Venter (Dimension Data), Francois Bidard (AG2R La Mondiale) and New Zealander Jack Bauer (Quick – Step Floors). Restrepo joined them to grab the sprint points before the break dissolved leaving only a tenacious Bauer in front solo for the third day in a row.

He was again named Most Competitive Rider of the stage for his efforts to animate the final laps but even he knew today would be a sprinters stampede at the finish.