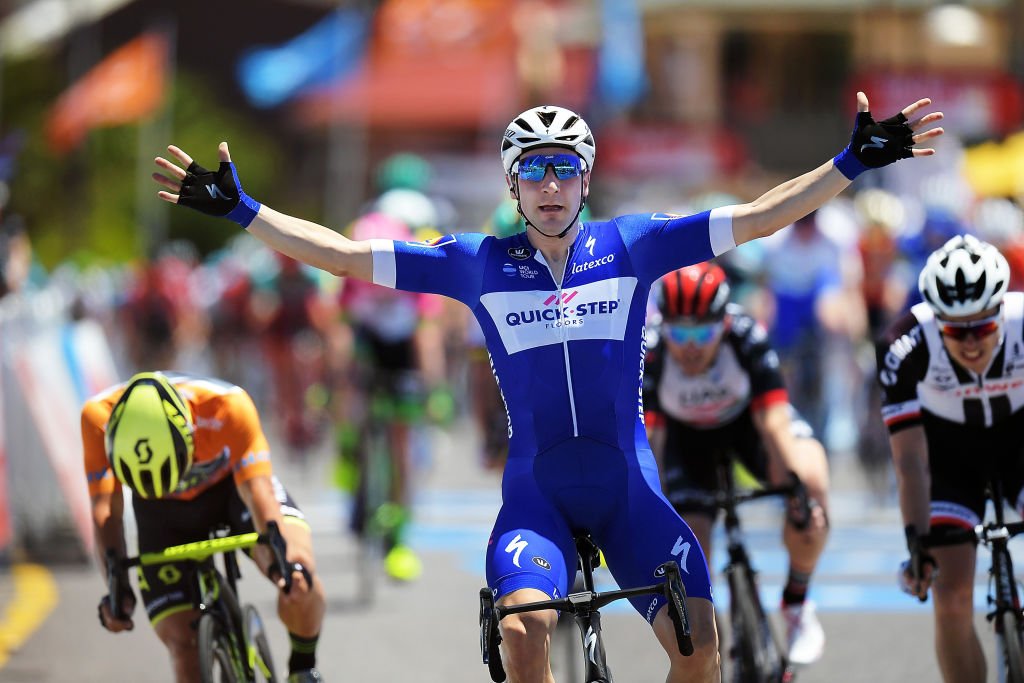 Elia Viviani has hit back from two top six finishes in the opening stages to claim honors in Stage 3 of the Tour Down Umder in what will be a welcome win for the Italian sprinter in his first race for Quick-Step Floors.

But the Santos Ochre Leader’s jersey-wearer Ewan mistimed his run – with some suggestion he may have wanted to give Edmondson a chance at victory instead – affording Viviani the chance to launch his legs like a long-range missile and tear through to claim the line.

German Phil Bauhaus (Sunweb) took second ahead of Ewan, who will continue to wear Ochre at tomorrow’s start in Norwood.

It will be a welcome win for Viviani, who tweeted of his back-to-back fourths after Stage 1 on Tuesday (he finished off the podium in Sunday’s People’s Choice Classic).

In a heat-shortened stage, the peloton was clearly in conservation mode as it wound its way from Glenelg to McLaren Vale and up to The Range for a Category 1 climb on Pennys Hill Road at the Range.

Once again it was Nic Dlamini (Team Dimension Data) taking honours from Scott Bowden (UniSA-Australia) at the checkpoint, ensuring he wears the Subaru King of the Mountain jersey for another day.

An exhausted, but elated Viviani praised his Quick-Step teammates for setting his final run for the win.

“It was an effort!” Viviani said after the stage.

“You need to conserve energy and refresh yourself until, for me, 200m to go and then try to be in a good position.”

“The guys did a perfect job… the feeling was good with the team, and I have an amazing team.”

“So thanks to all of my teammates!”

Having practised on the track to charge his legs for the sprint finishes in Adelaide and pushing himself through a strong winter training period, Viviani has claimed the final sprint finish for the event until Stage 6 in Adelaide on Sunday.

“It’s the fourth sprint we’ve done, and it’s not easy to come in January and be in good condition,” Viviani said.

“I did a good winter, the feeling with the team is good, and I’m really, really lucky to be here and to take this win.”

South African neo-pro Nic Dlamini continues to secure his place on the podium as leader of the Subaru King of the Mountain classification, having pushed ahead of rival Scott Bowden (UniSA-Australia) in the rise up Pennys Hill Road at The Range.

In doing so, he became the inaugural winner of the Terry Roberts Trophy.

Roberts was a core member of the Tour’s original organizational team in 1998 to set up the inaugural race, and was a member of the team until his passing following a short illness in 2017.

A short and sweet scorcher

With the peloton again managing their pace owing to the extreme heat, the shortened run in Victor Harbor (reduced by approximately 26km – or two circuits of the event) gave the peloton a quicker blast south of Adelaide.

The southaustralia.com intermediate sprints went the way of Dlamini (at Myponga) before Bowden took honours at Inman Valley – well ahead of the pelton and placegetters Nathan Haas (Katusha-Alpecin) and Jay McCarthy (BORA-hansgrohe).

Friday’s Stage 4 will run full-length, but race organizers confirmed an earlier start to the stage.