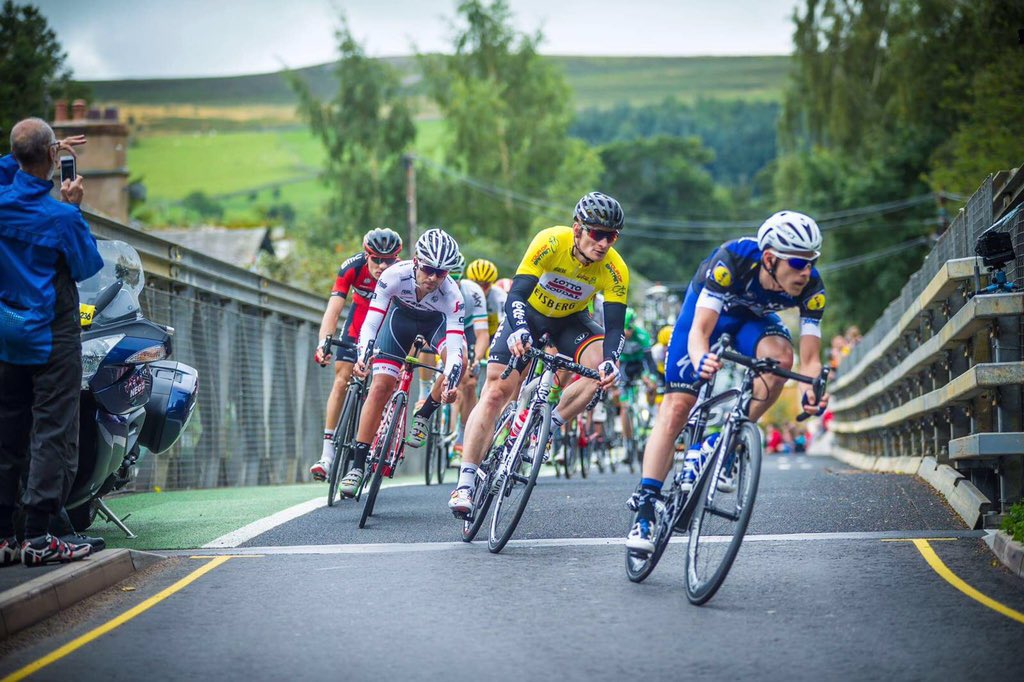 As a result, today’s win not only netted the Belgium rider the stage victory, but also moved him up into the overall race lead.

The Etixx Quick-Step rider was among the survivors of a 15-rider breakaway on the 188-kilometer stage from Carlisle and was joined by Dimension Data man Cummings, who had broken away on the climb of The Struggle, and was an aggressive presence throughout the run in to Kendal.

“I knew once the break it had gone it would be very difficult to catch us or if they did catch us they would have wasted a lot of energy as well,” Vermote said afterwards.

“Once I saw Cummings coming back I knew I had to stay in his wheel because once he gets a little gap he’s gone. We had good co-operation between us but I’m really glad I could take the Stage win.”

After starting in clear conditions in front of large crowds in Carlisle, the first half of the stage was run off in sunny conditions, with the strong 15-rider lead group containing overnight leader and Stage One winner Andre Greipel, Team Sky’s Nicolas Roche and Vermote.

Once through Keswick and over the second SKODA King of the Mountains climb of Chestnut Hill the rain and mist set in with the, much anticipated, climb of The Struggle out of Ambleside proving decisive.

Dimension Data’s Mark Cavendish led the peloton onto The Struggle, just over a minute and a half down on the fracturing front group as Vermote and Roche went clear from the break with Xandro Meurisse, Bert-Jan Lindemann and Trek Segafredo stagiare Jacopo Mosca.

First to bridge across was BMC’s former World Hour Record holder Rohan Dennis with an impressive ride, making six in front on the descent, with a chase group of ten led by Cummings and Ben Swift behind. Under pressure from Cummings and Gallopin that group dissolved, with Cummings going on to make it across.

The Brit put in several attacks on the rolling Crook road from Windermere towards Kendal, with Vermote the only rider able to follow him. The pair built a 40-second gap as they approached 5-kilometres to go, the majority of that work done by Cummings as with Dan Martin behind Vermote was content to bide his time until the finale on Beast Banks.

With Cummings leading up the climb, Vermote surged past on the outside as the gradient eased going into the final 200-metres, crossing the line with a 2-second advantage over Cummings, good enough for a six second lead overnight going into Stage Three in Cheshire.

The win was Vermote’s first since his victory in Brighton during the 2014 Tour of Britain, when he won alone at the end of another arduous stage.

“I asked the team to come here, I knew it wasn’t originally in the programme but I knew there would be some opportunities,” said Vermote reflecting on his win. “It’s an open race with only 6 riders per team so that makes it different to all the other races. It’s a really tough race though, small roads and up and down all day but I’m just really happy I took my chance.”

Behind Vermote on the General Classification is Cummings at six seconds, with Dan Martin third at 1-minute 04-seconds, before Meurisse, Swift and Tony Gallopin all a further four seconds in arrears, while only the top-12 riders remain within three minutes of the Yellow Jersey presented by Eisberg.

Meanwhile, Stage One winner Greipel moved into the Yodel Sprints jersey after taking a clean sweep of the intermediate Yodel Sprints in Hesket Newmarket, Cockermouth and Grasser, and Wanty Group Gobert’s Meurisse took the lead in the SKODA King of the Mountains jersey.