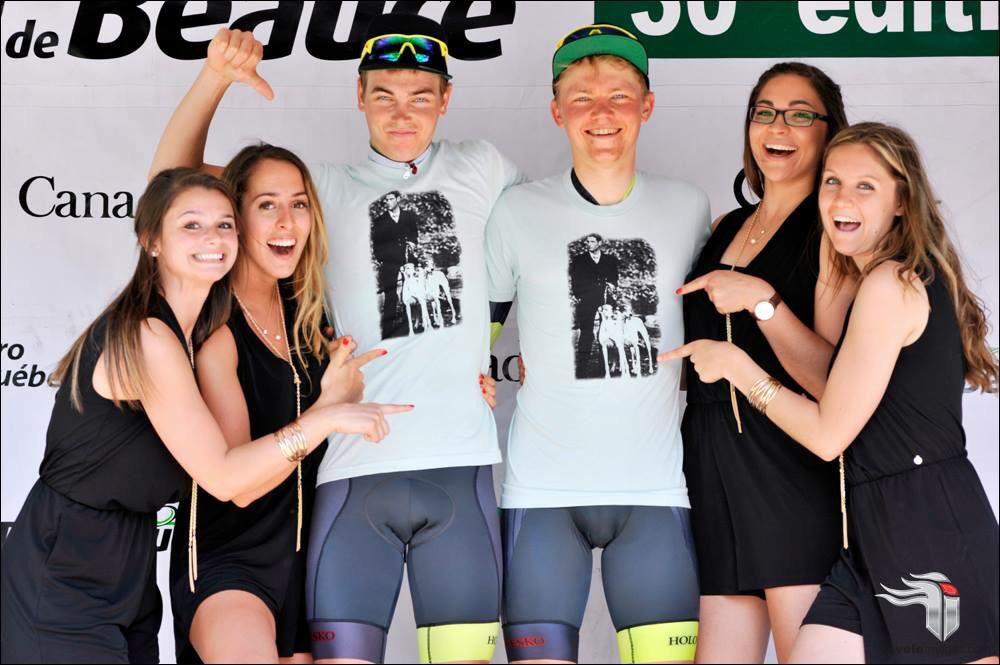 A familiar face is back on center stage at the 30th Tour de Beauce while Toms Skujins, racing with Team Hincapie, took over the yellow jersey of leader in the overall standings after the challenging Individual Time Trial.

2014 Tour de Beauce Champion, the Latvian cyclist finished in seventh place against the clock, improving seven ranks compared to last year time trial. He thus outperformed the overall standings Spanish Amets Txurruka (Caja Rural) by 12 seconds in the general classification. The latter, who does not consider himself a TT specialist, nevertheless offered a great performance despite a puncture at the bottom of the challenging climb.

The stage victory went to Brendan Canty (Budget Forklifts) with a time of 28m47s. He was followed by Ryan Roth (Silber Pro Cycling) at 28:54 and Jordan Cheyne (Ride with Randall) with 28:59.

The best performance from a Quebec cyclist was the one of Rémi Pelletier-Roy (Garneau-Quebecor) with a sixteenth place and a time of 29:50.

Tonight whole peloton participates in the criterium in the streets of downtown Saint-George. The riders see it as a great opportunity to perform in front full of spectators and the temperature is expected to bring a nice crowd.

Guillaume Boivin, of Team Optum p/b Kelly Benefit Strategies, highlighted with great brilliance the return of the criterium at the 30th Tour de Beauce. The Quebec cyclist edged three other riders who had joined him in a breakaway that left in the first quarter of the race of 40 laps.

His performance was strongly emphasized by the spectators, who had gathered along the route. An enthusiastic crowd which allows the organization to score precious points with the UCI. The criterium was not allowed by the international organization for some years in stage races. Since last year, the UCI provided some exceptions, and this is how the Tour de Beauce was able to bring back its criterium, always popular. This is a test for the coming years and it is hoped that the UCI will fully embrace the criterium.

Especially as Guillaume Boivin gave quite a show. “It was fantastic,” said his manager Eric Wohlberg. “He was the instigator of the break. We were expecting a light rain and we thought it was better to be in the break if the road became slippery.”

“I was very motivated,” for his part, said the winner of the criterium, “because my family was here and I wanted to perform well. I knew Hincapie, the team with the yellow jersey, would leave from a breakaway that was not dangerous in the standings. When we left, there was some strong guys with me, Jack Bobridge (second) and Matteo Dal-Cin (third), powerful riders. I told the guys that Hincapie would let us go, that we were not a problem for them. My strategy was to try very hard to breakaway in the first 10 laps, and if that didn’t work, we would bring Eric Young in a sprint.”

The caravan of the Tour de Beauce now travels to Quebec City, a popular stage for cyclists with a 12:15pm to departure time at Parc de la Francophonie.