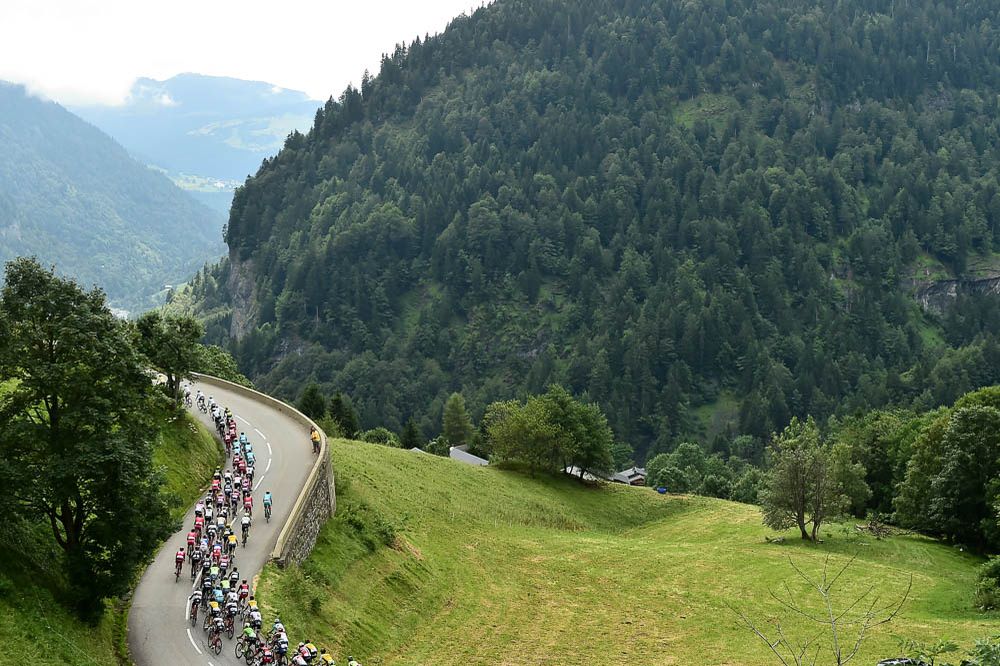 Ion Izagirre (Movistar) won the penultimate stage of the Tour de France today, after attacking on the descent of the Col de Joux Plane to take the biggest win of his career.

Indeed, the Spanish rider managed to outdistanced Jarlinson Pantano (IAM Cycling) and Vincenzo Nibali (Astana) after the trio had formed as a small breakaway group just before the summit of the climb.

Meanwhile, race leader Chris Froome took a careful approach to the final decent to finish safely in the main field.

The British rider heads into Paris tomorrow with a 4:05 lead over second place Romain Bardet (AG2R La Mondiale) and Nairo Quintana (Movistar) in third at 4:21.

Rain impacted the race for most of the day as Astana led the head of the peloton, while their top GC rider Vincenzo Nibali remained up the road in the breakaway group, along with his teammate Fabio Aru and Roman Kreuziger (Tinkoff).

However, Aru cracked on the lower slopes of the Col de Joux Plane, giving Nibali the option to attack the two riders off the front of the breakaway – Jarlinson Pantano (IAM Cycling) and Julian Alaphilippe (Etixx-Quick Step), who went away on the descent of the Col de la Ramaz.

With Nibali fast on their heels, Alaphilippe attacked again to try and distance Pantano with 5.5 kilometers to go until the summit, but the Colombian rider wasn’t prepared to give up that easily.

In the meantime, Joaquim Rodriguez decided to attack from within the peloton in hopes of moving up into the top 10 of the general classification, while at the front of the race Nibali was closing on the lead duo.

Back up front, Pantano looked hampered from Alaphilippe’s back-to-back attacks, but the stage 15 winner proceeded to accelerate past the young Etixx-Quick Step rider to try and hold off Nibali a bit longer.

But Nibali succeeded in bridging himself across, and drove the pace at the front with a struggling Pantano and Alaphilippe unable to hold his wheel.

From there, Izagirre moved up to Pantano and Alaphilippe and attacked straight past them, with ony the Colombian rider able to stay on terms with him as he tried to rein in Nibali.

The trio crested the Joux Plane together, followed by the ramp up to the Col du Ranfolly before starting the wet descent to Morzine.

Pantano was the first to make a mistake, taking a corner wide and unclipping a foot and slowing down Nibali, allowing Izagirre to speed off the front.

While the lead trio were taking huge risks, Froome et al took a more cautious approach along the descent.

Izagirre crossed the finish to claim the stage victory, while Quinana battled it out to save his place in the general classification.

Aru’s struggles saw him drop out of the top 10 GC altogether, finishing 17 minutes behind the stage winner.

Bauke Mollema was another rider to fall back in the top 10 GC as well, with Kreuziger taking his place in 10th spot.