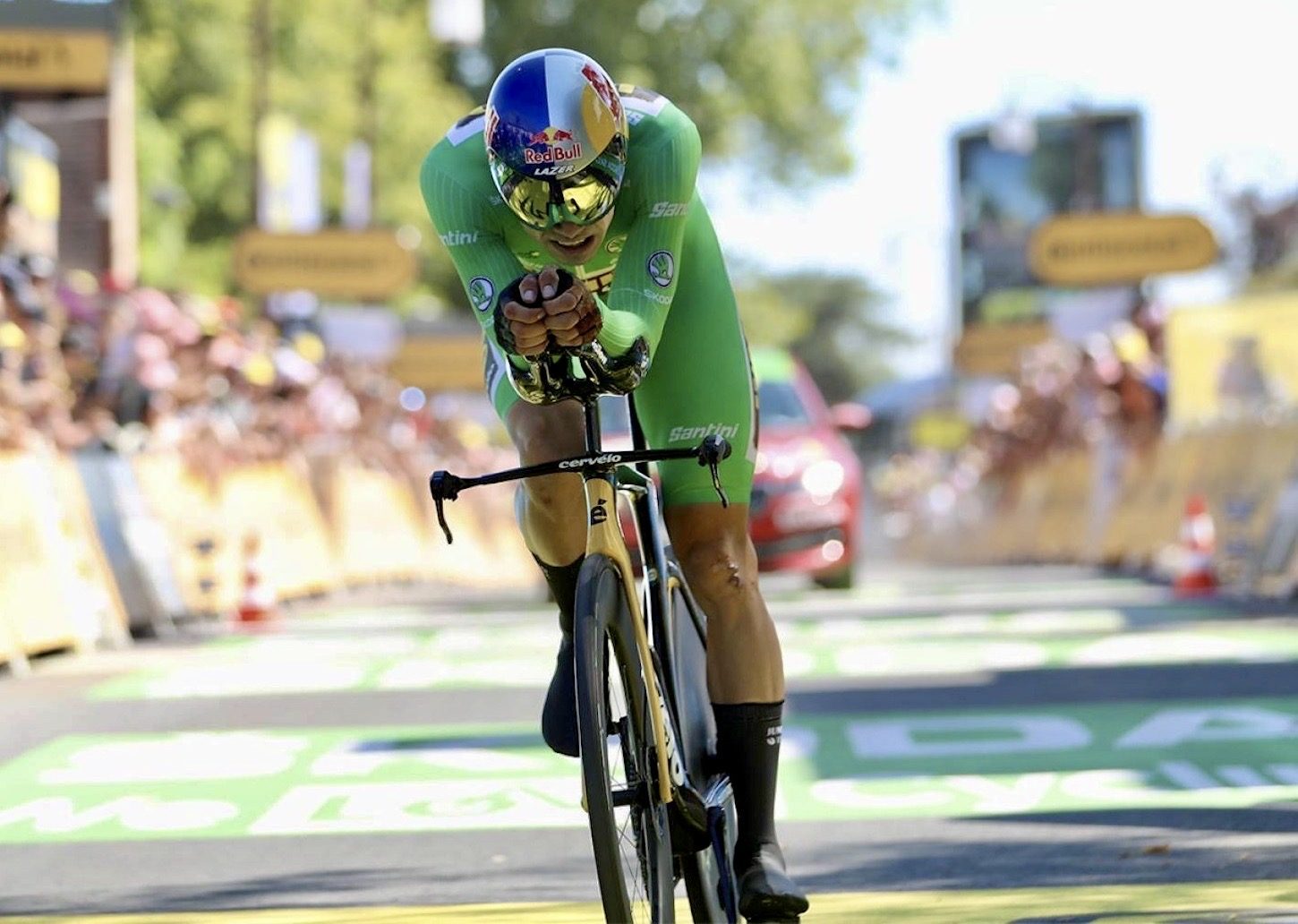 Wout van Aert and Jonas Vingegaard made it a 1-2 victory for Jumbo-Visma in today’s time trial stage of the Tour de France, with Vingegarrd all but sealing the overall title, while his Belgian teammate set the fastest time along the 40.7 kilometer course from Lacapelle-Marival to Rocamadour.

Van Aert stopped the clock at 47:59, knocking world champion Filippo Ganna (Ineos Grenadiers) off of the hot-seat with an average speed of 50.893 km/h.

Both Vingegaard and two-time defending champion Tadej Pogacar (UAE Team Emirates) went through the first time check quicker than Van Aert, while Geraint Thomas (Ineos Grenadiers), third in the overall standings, was just one second slower, setting up a nail-biting race against the clock.

Vingegaard was initially quicker than his teammate at the second and third time checks, but Van Aert excelled on the two climbs, surpassing the benchmark set by Ganna.

Vingegaard appeared to have swept through a corner a little too fast, almost steering off the pavement, prompting the Danish rider to pace himself more cautiously    to secure what looks to be Denmark’s first Tour victory since 1996.

Meanwhile, Matteo Cattaneo (Quick-Step Alpha Vinyl) was second behind Ganna at 44 seconds back, with Mikkel Berg (UAE Team Emirates) at third-fastest among the early starters at 1:41 slower.

“I gave it all today,” Van Aert said. “I want to win races, and today I had hoped to take the stage, and I hoped that Jonas could secure his yellow. He has such a big heart that he thought the same, so it’s special. It’s a great day.

Vingegaard, who surprised many last year to finish second overall, was rock solid from start to finish across this year’s French Grand Tour. But, that was not the case in 2020, when he falter in the final time trial event.

“I think what happened two years ago, we were all thinking about it,” he said of pre-race nerves. “We were not afraid of it, but we had it in our heads and we didn’t want it to happen again. We wanted to go for it today and have a good as result possible today.”

“I don’t read the media, so I don’t know how crazy it is at home. I am lost for words,” he said. “It’s a special day for us and for the whole team at Jumbo-Visma, and I want to give thanks to everyone to every rider and every staff members. It’s special.

Behind them, David Gaudu defended his fourth place overall, while Aleksandr Vlasov (Bora-Hansgrohe) bounced up three spots to move into fifth overall. Nairo Quintana, Romain Bardet, and Louis Meintjes all were bumped down one spot each.