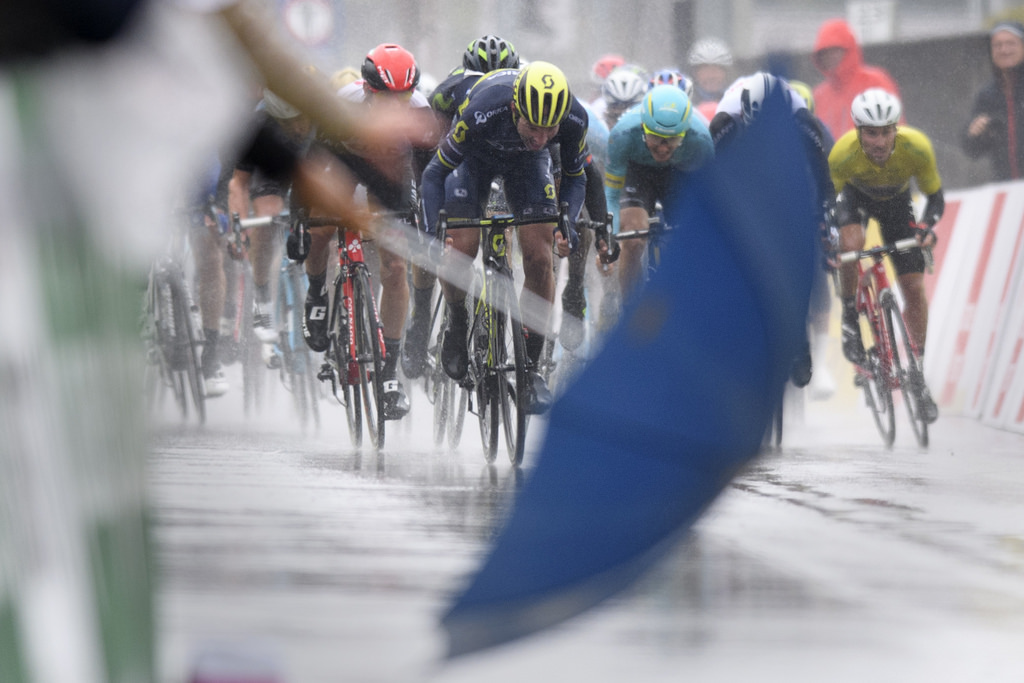 Michael Albasini (ORICA-Scott) added another stage victory to his name in the Tour de Romandie today as he sprinted to the win on a rainy stage one.

The local Swiss rider was able to stay with the fast tempo set over the final first category climb and positioned himself well to launch towards his second victory of the season and seventh stage victory in the Swiss tour.

ORICA-SCOTT animated the finale of the challenging first stage with late attacks from Damien Howson and Roman Kreuziger, however, in the end no riders where able to gain a gap and the day concluded with a reduced bunch sprint.

“It is a great victory today,” 36-year-old Albasini said. “It was not easy to win today coming straight from the classics as that was a big goal and it takes a lot of mental energy.”

“I really needed to focus coming to this race to suffer and to fight. It is Romandie so it is important I can come here and race well, so I am very happy that I could take the win today.

“I wasn’t so confident for today’s stage but I told myself if I can be there at the end in Liege-Bastogne-Liege after 4,000metres of climbing then why can’t I be able to be here over the climbs today.

“I tried to fight and stay in the bunch and it worked out to be even better than I thought so I am really happy with that.”

Sport director Neil Stephens was delighted with the result along with the entire team performance throughout the tough 173kilometre wet stage.

“The whole team rode well today, they kept their calm through the valley and Alex Edmondson and Sam Bewley placed the boys really well into the bottom of the climb and the climbing crew took over from there,” Stephens said.

“We had a plan that if we got to the climb and Alba wasn’t able to stay with them, then it was up to Yates and Kreuziger, but if Alba was still there for the finish then we would work to help him and that was the case.”

Like yesterday’s opening prologue the riders were faced with chilly, rainy conditions ahead of the 173 kilometer road stage.

Within the first 20 kilometers of the race six riders opened up a gap and established the main breakaway of the day.

From there, the quartet achieved a maximum advantage of eight and a half minutes before the peloton picked up the chase, gradually reeling them back in.

Over the top of the penultimate third category climb with 16 kilometers to go, the leader’s advantage had reduced down to just one minute 30 seconds as the rain continued to pour.

Eventually the breakaway riders where swallowed up with six kilometers to go and a flurry of attacks came. Howson found himself in a small lead group and immediately after it was brought back, Kreuziger launched a counter attack.

With the bunch remaining in tact, Yates led over the summit of the climb and continued to set the tempo down towards the finish line with Albasini showing his experience and form to blast to another victory this season.