Looking Back When Jan Raas Dominated the Amstel Gold Race 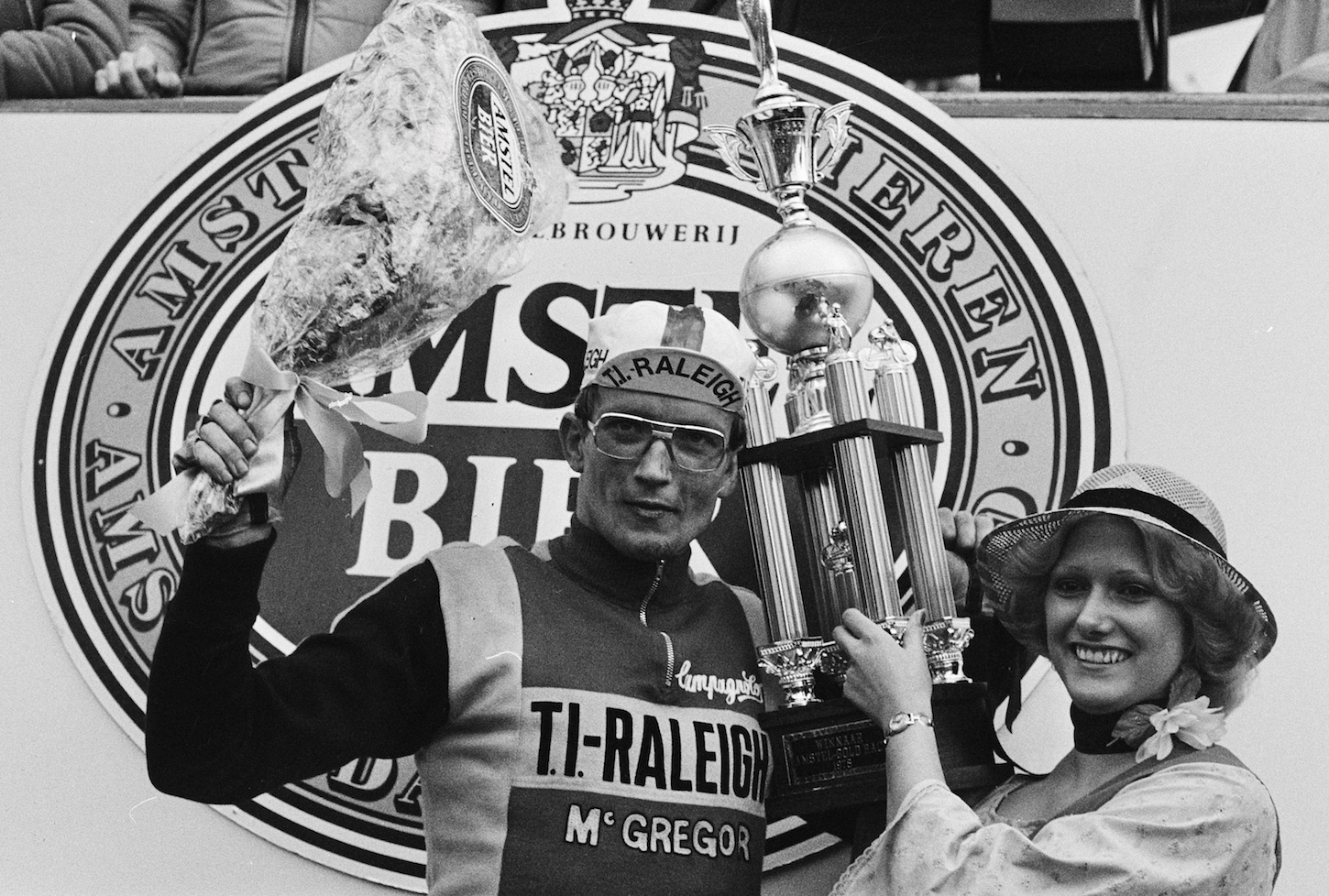 The youngest of the Classics and the only one on Dutch soil, the Amstel Gold Race was born in 1966, taking its name from the beer brewer. The women’s race is organised on the same day as the men’s race, having been held from 2001 to 2003 and again from 2017. But among male or female racers there’s nobody with a record to match the Dutch master Jan Raas who won consecutively from 1977 to 1980, plus the 1982 edition. His superiority in this race in those years inspired the nickname ‘Amstel Gold Raas’.

Even though its route is entirely in the Netherlands, the Amstel Gold Race is one of the Ardennes Classics and usually takes place in the middle of April, after the Cobbled Classics; part of the UCI WorldTour, it’s undoubtedly the most important Dutch race. The first edition took place on 30 April 1966 (a national holiday in the Netherlands). The original route was from Amsterdam to Maastricht (280km) but after organisational issues it was changed to run from Breda to Meerssen (302km) and saw victory for the Frenchman Jean Stablinski. The route changed several times in the following years. Eddy Merckx was the first rider to win twice… until the beginning of the Jan Raas era in the late 1970s.

The first Amstel Gold Race won by Raas was in 1977. Its course perfectly suited his physical characteristics since he had a great talent in the short climbs (less so on the long and steep ascents), he was a very fast sprinter and had a superior sense of the tactics and strategy on the road, thanks to his mentor Peter Post at TI-Raleigh. At the same time he showed a very strong character and a combative attitude on the bike.

In 1976 Raas was crowned road race National Champion (the first of three occasions) and in the spring of 1977 he surprisingly won his first Monument, Milano-Sanremo. On 9 April, after 230km on the route from Heerlen to Meerssen, the Dutchman came first in a select group of sprinters including his two compatriots Gerrie Knetemann – who had won three years earlier – and Hennie Kuiper.

The 1978 edition finished with just 32 of the 138 riders making it to Meerssen. Jan broke away and finished solo with 1’16” on the Italian Francesco Moser.

Reading the final results it’s impressive that all the first six riders were – or would go on to be – UCI World Champions: after Raas (1979) and Moser (1977) are another Dutchman Joop Zoetemelk (1985), the Belgian Freddy Maertens (1976 and 1981) and, also from the Netherlands,  Kuiper (1975) and Knetemann (1978). In the same year, Raas also won Paris-Brussels, Paris-Tours and three stages of the Tour de France.

It was another solo win for Jan in 1979, on 14 April. He broke away with his compatriot Henk Lubberding and the Swede Sven-Åke Nilsson, before going clear in the final. Raas enjoyed a wonderful season, winning the Tour des Flandres, E3 Prijs Vlaanderen (now E3 BinckBank Classic), a stage of the Tour de France, two stages and the general classification of Ronde van Nederland and becoming UCI World Champion after a highly criticised sprint in Valkenburg.

With the rainbow jersey on his shoulders, Raas completed his fourth consecutive win on 5 April 1980 with an extremely powerful sprint ahead of the Belgian Fons De Wolf and the talented young Irishman Sean Kelly. The rest of the 1980 season was positive for Jan, who won four stages in Tour de France, with another victory at the E3 Prijs Vlaanderen and Kuurne-Brussels-Kuurne, among the other wins.

In 1981, Raas was finally defeated in the Amstel Gold Race after a perfect sprint by the Frenchman Bernard Hinault. Curiously, the Breton had finished fifth the previous year, the Dutchman’s position in 1981. In the season, Raas once again won the E3 Prijs Vlaanderen along with the Omloop Het Volk (now Omloop Het Nieuwsblad) and Gent–Wevelgem.

Raas had a bright start to the 1982 season with wins in the Dwars door België and especially with Paris-Roubaix, but what he really wanted was to avenge his defeat in the 1981 Amstel Gold Race. His condition was superb: one week after destroying his rivals on the pavé, the quintet was complete as Jan won his fifth edition beating the Irishman Stephen Roche in the sprint, while the German Gregor Braun finished third.

Raas came third in the 1983 Amstel Gold Race, then in the 1984 Milano-Sanremo he suffered a bad crash. After recovering to win another Dutch Championships in 1984 and a Tour de France stage, Raas retired halfway through the 1985 season.

Currently, there is only one rider who might have the chance to match Raas’ record of five victories at the next edition: the Belgian Philippe Gilbert who has already won four times (2010, 2011, 2014 and 2017), and won the 2012 UCI Road World Championships in Limburg after a decisive attack on the Cauberg. The last edition of the Amstel Gold Race, in 2019, went to the multi-talented local rider Mathieu van der Poel.