In a very exciting final, Kristijan Durasek played his cards perfectly, as he attacked out of an elite front group on the last kilometer of stage 2 of Tour de Suisse. Tom Dumoulin was under attack but he managed to keep the yellow jersey at the end.

After a fast start with numerous attacks, the breakaway finally got clear of the peloton after the climb to Allenwinden. Luka Pibernik (Lampre-Merida), Cameron Meyer (Orica GreenEdge), Jurgen Roelandts (Lotto Soudal) and Valerio Agnoli (Astana) quickly gained a solid lead. Benjamin King (Cannondale Garmin) and Simone Antonini (Wanty Groupe Gobert) tried to bridge the gap but they were unsuccessful in their attempt.

Due to his good prologue yesterday, Meyer started today’s stage just six seconds behind Tom Domoulin in the general classification. Thereby, the Australian was the virtual leader of the race for the majority of the stage.

As the breakaway started on the Michaelskreuz climb for the first time, it didn’t take long before the quartet transformed into a duo. Agnoli and Roelandts couldn’t follow the pace of their two companions and had to see them sail away on the steep slopes towards the top. Pibernik won the KOM sprint in front of Meyer, while a reduced peloton followed 1:41 minutes behind them.

The duo kept a gap of around one minute for the majority of the lap around Risch-Rotkreuz. The second time the riders went up the Michaelskreuz ascent, overall favorite Jakob Fuglsang put in a strong attack, which quickly reduced the peloton. Only a few riders were able to follow the Dane who attacked numerous times towards the top, thinning out the front group. Tom Dumoulin fought hard to minimize the gap in order to keep his yellow jersey and, on the descent, the Dutchman made it back to the front group.

Geraint Thomas tried to get away on the fast downhill section where the speed exceeded 100 km/h. However, with 6 km to go, the front group was compact. Another group with Peter Sagan was chasing after but they didn’t manage to make it back in time for the sprint.

Passing under la flamme rouge, everybody in the front group started to look at each other. Kristijan Durasek quickly realized what was going on and decided to attack. Even though both Astana and Katusha had two riders in the group, they didn’t manage to rail back the strong Croatian who took a beautiful solo victory. Durasek arrived at Tour de Suisse fresh off winning Tour of Turkey overall last month. After taking “the most important win of his career” today, the Lampre-Merida rider is now 8th overall, 18 seconds behind Tom Dumoulin. Geraint Thomas sits third, seven seconds down.

One rider didn’t take the start this morning. Movistar’s Javier Moreno crashed just a few hundred meters from the finishing line in yesterday’s the prologue. The Spaniard finished the stage but unfortunately, his injuries didn’t let him stay in the race. 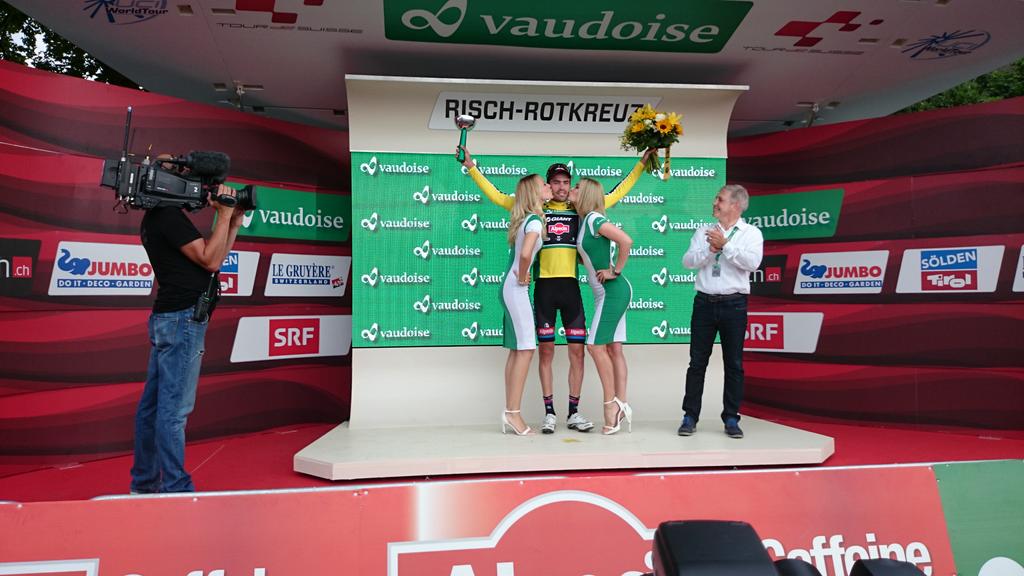