Orica-GreenEdge pulled off an amazing team performance when they set up Michael Matthews to win the uphill finish in Schwarzenbach. Tom Dumoulin continues to lead the race overall before tomorrow’s queen stage.

Two riders didn’t take the start this morning; Gang Xu (Lampre-Merida) and Philippe Gilbert (BMC). The Chinese rider suffered from a crash on stage 2, while knee pain prevented Gilbert from continuing in the race.

Soon after the official start was given, Thomas De Gendt (Lotto Soudal) and Davide Malacarne (Astana) attacked. The duo was later joined by Frederik Backaert (Wanty – Groupe Gobert), Alex Howes (Cannondale Garmin) and Stijn Devolder (Trek Factory Racing). Despite Backaert being the best-placed rider in the general classification, more 16 minutes behind Tom Domoulin, the peloton didn’t let the quintet get too much of a gap.

As the five riders at the front started on the category 2 climb to Wildhaus, the peloton was just three and a half minutes behind them. At the top of the climb, the gap was down to two minutes and 50 seconds. The peloton continued to keep the break in a tight leash and upon crossing the finishing line for the first time, less than one minute separated them.

With 50 km to left to go, the peloton – led by Orica GreenEdge – caught the five-man breakaway. In Michael Matthews, the Australian team had one of the top favorites for this undulating stage. By setting a high pace in the peloton, they made sure the pure sprinters didn’t get a chance to sprint for the win. Arnaud Démare, Mark Cavendish and Alexander Kristoff all lost ground on the hills.

At the intermediate sprint with 38 km to go, Tom Dumoulin took the other riders by surprise when he crossed the line first and thereby won three important bonus seconds. The Dutchman now had an eight second lead overall to Peter Sagan, meaning Sagan had to win the stage if he wanted to take the yellow jersey.

Starting on the final lap of 29.2 km, the peloton was still rather big despite many sprinters being dropped already. Orica GreenEdge kept leading the pack, trying to prevent any dangerous moves on the numerous ascents. Alexey Lutsenko (Astana) managed to solo away but the former U23 world champion was caught again with 6.7 km left to ride. In the meantime Sagan had taken two bonus seconds in the last intermediate sprint, bringing him just six behind Dumoulin overall.

A strong trio of Sergio Henao (Team Sky), Marco Marcato (Wanty – Groupe Gobert) and Jan Bakelants (Ag2r) tried to distance the peloton but Tinkoff-Saxo and Orica GreenEdge managed to rail them back in, in order to set up the sprint.

Sagan opened his sprint with 300 meters to go but it proved to be too early. On the final meters, Matthews flew past the Slovakian to take his first ever stage win in Tour de Suisse. In the general classification, Dumoulin is now just one second ahead of Sagan with Daniel Moreno in third place, nine seconds down. 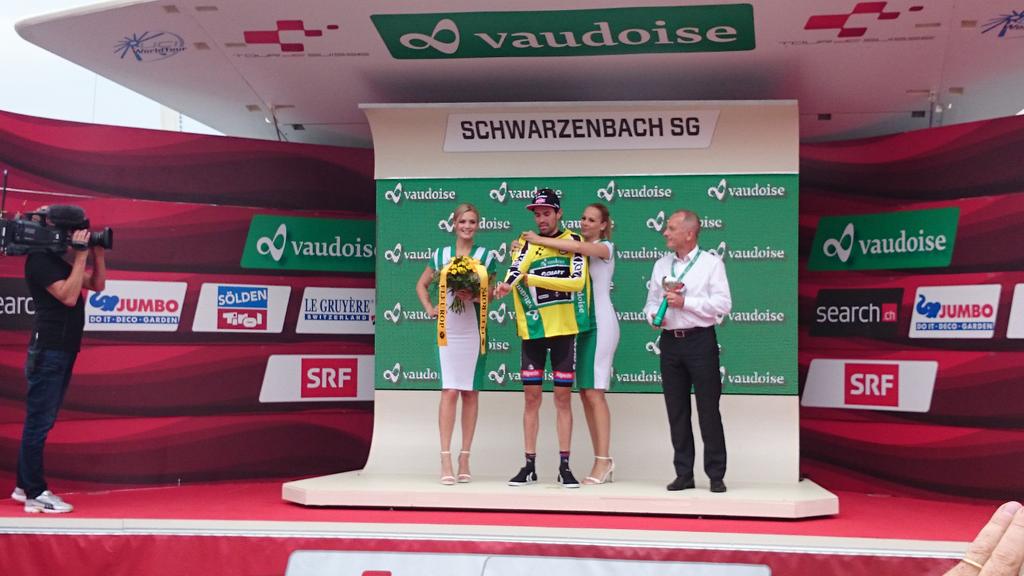